Home » How elderly embrace their personality regardless of age 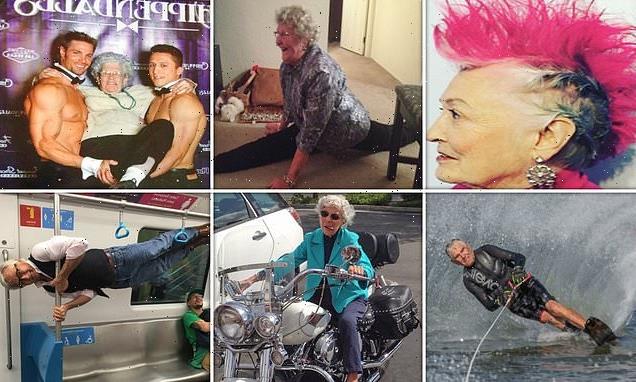 Age is just a number! Hilarious photo gallery shows the elderly who are still VERY young at heart – including a 90-year-old with a pink mohawk and grandmother, 80, doing the splits

It can be easy to make assumptions about the interests of elderly people, but these snaps prove age is just a number when it comes to embracing all that life has to offer.

From a woman celebrating her 90th birthday with a pink mohawk hairstyle to a grandmother doing the splits, Bored Panda has rounded up a selection of elderly people from around the world who’ve gone viral on social media.

Among the amusing collection includes one photo which shows a grandfather using a pole to lift his body into the air after being offered a seat, while another shows an elderly man enjoying a rollercoaster despite his lung condition.

Elsewhere, a snap shows an 84-year-old great-grandmother is all smiles as she is seen being lifted into the air by two topless men. 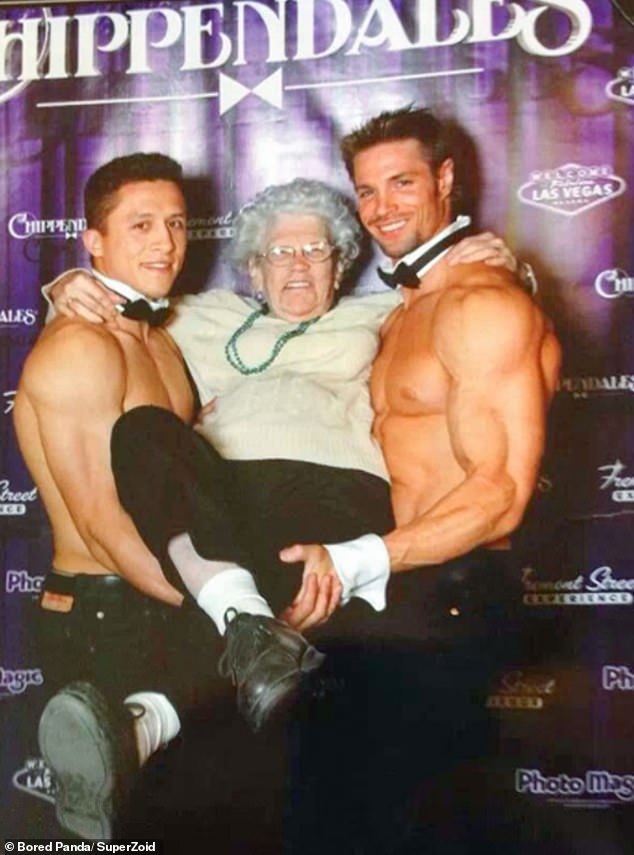 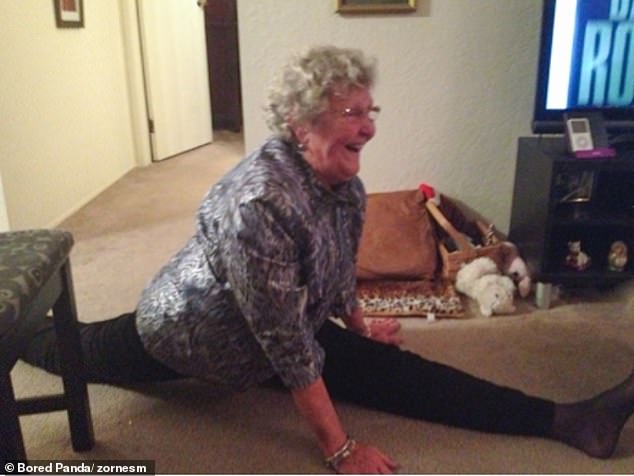 A grandmother, who lives in the U.S, was photographed doing the splits after celebrating her 80th birthday with a party 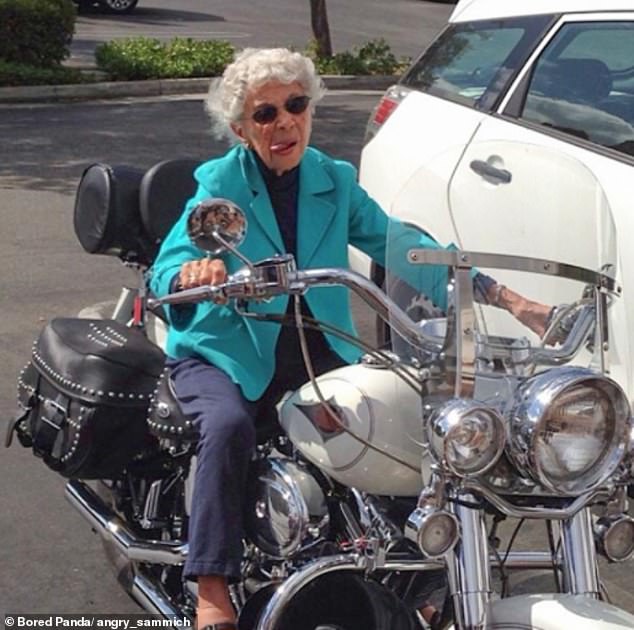 Need for speed! A woman, believed to be in the U.S, posed on a motorbike to mark her 105th birthday 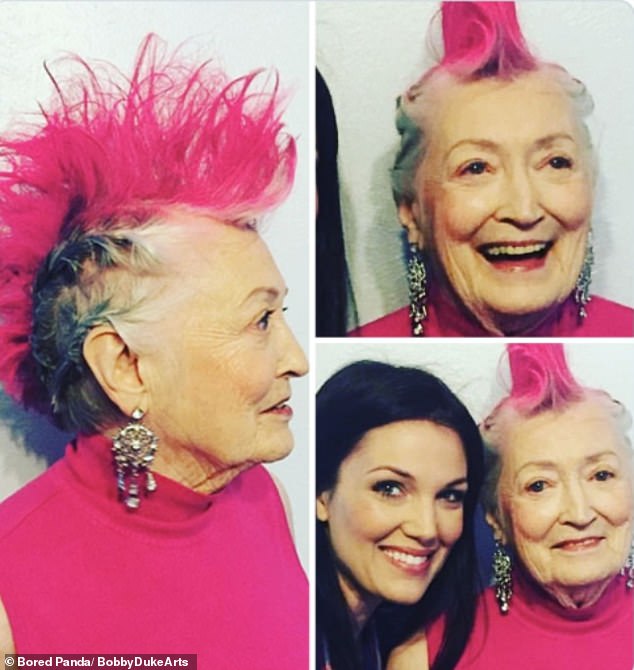 One man, who lives in the US, took to Twitter to reveal his 90-year-old grandmother has transformed her appearance with a pink mohawk 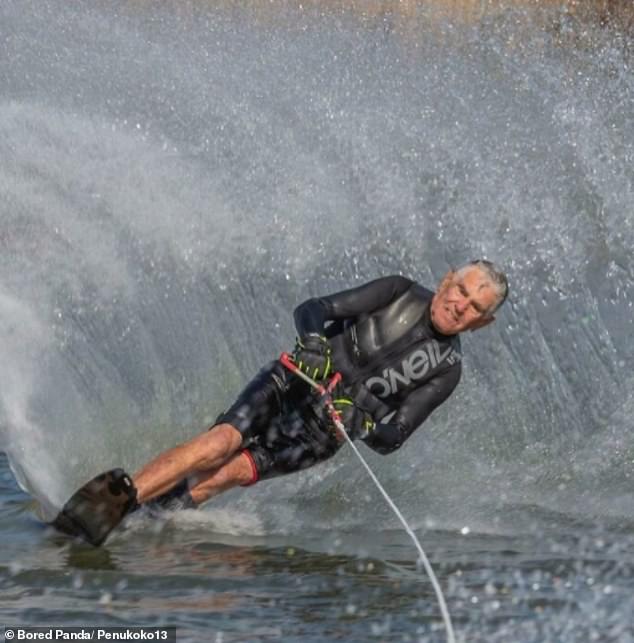 A Reddit user, who lives in Colorado, shared a snap of their grandfather water skiing ahead of his 91st birthday 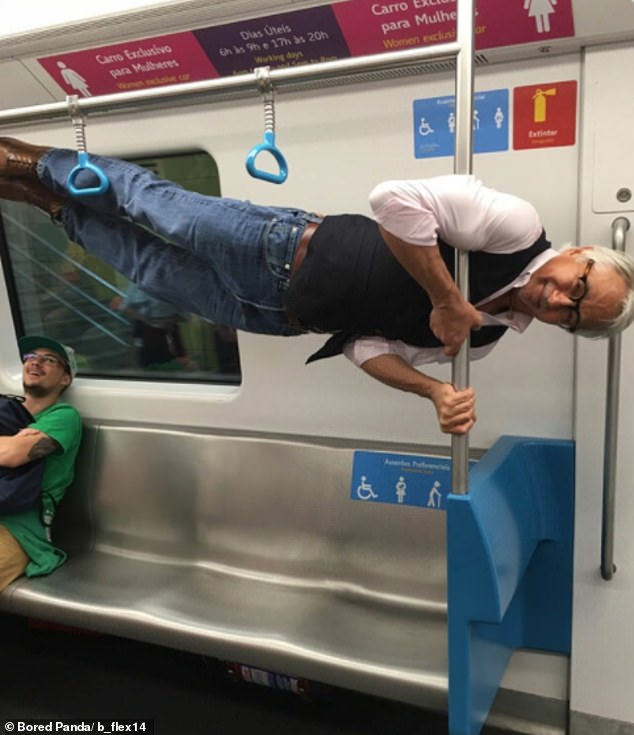 Life’s truly about balance! A man, from Brazil, revealed his grandfather lifted himself into the air after being offered a seat 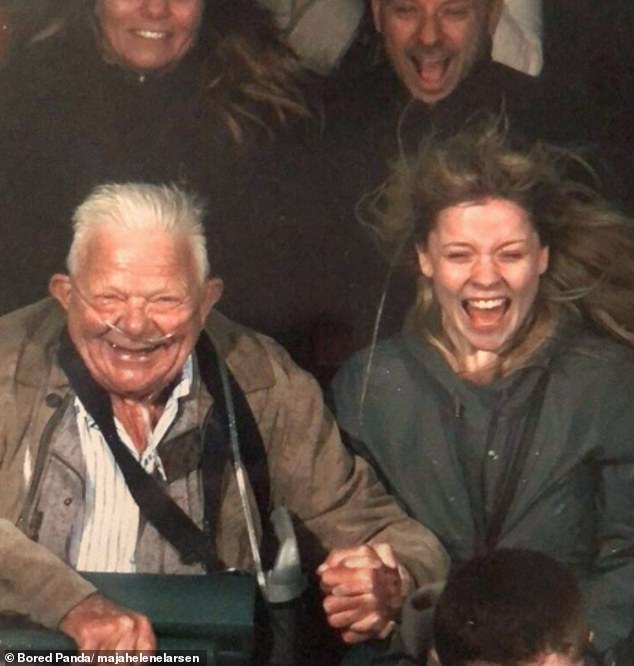 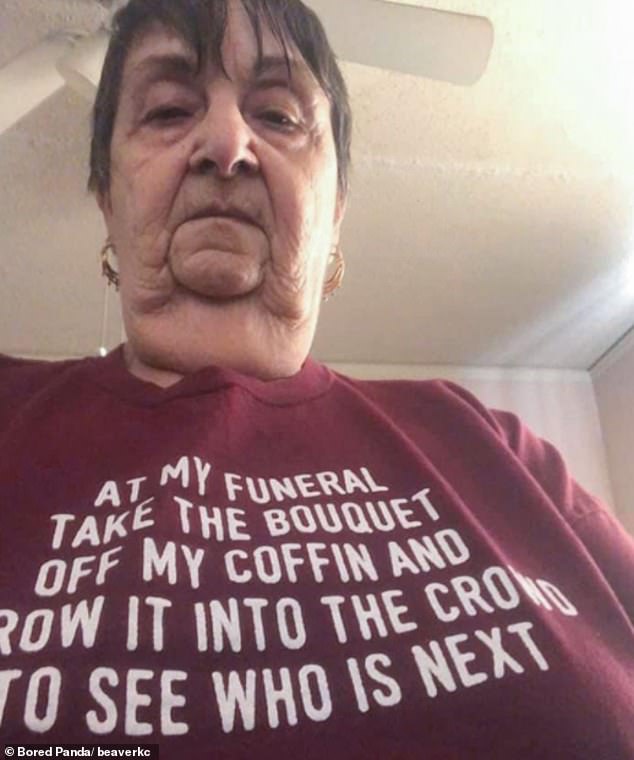 An aunt, based in an unknown location, went viral after sharing her first selfie with her first ever smartphone 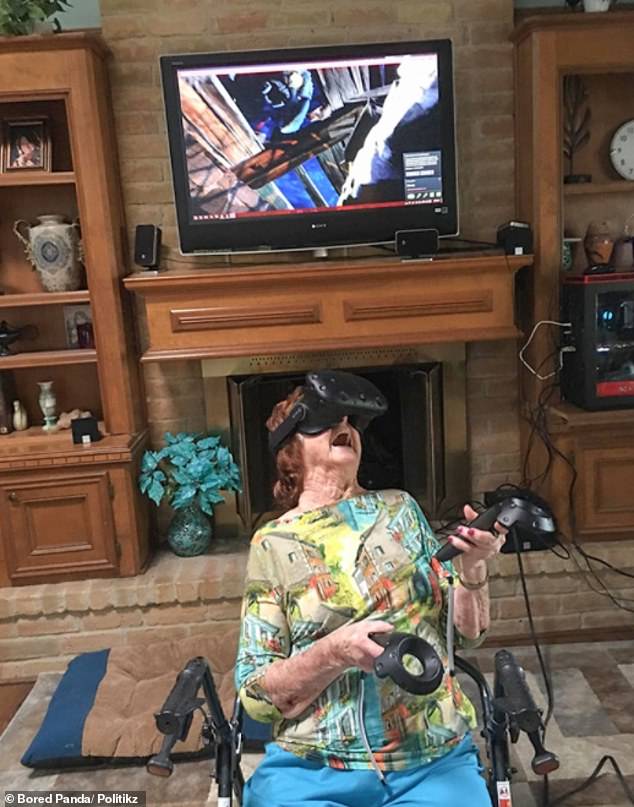 Girls just want to have fun! One person revealed the joy their 96-year-old grandmother had while playing virtual reality games 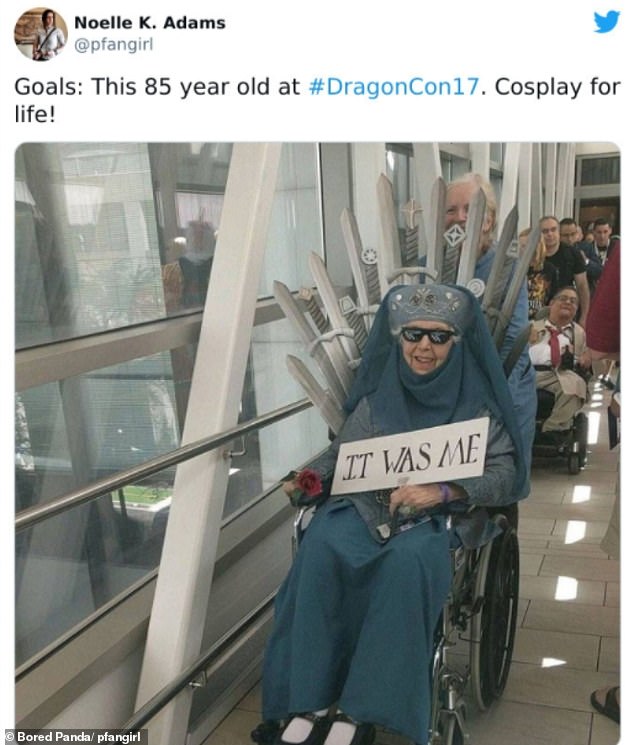 A woman, who lives in South Africa, revealed her 75-year-old grandmother donned an Olenna Tyrell costume for Cosplay 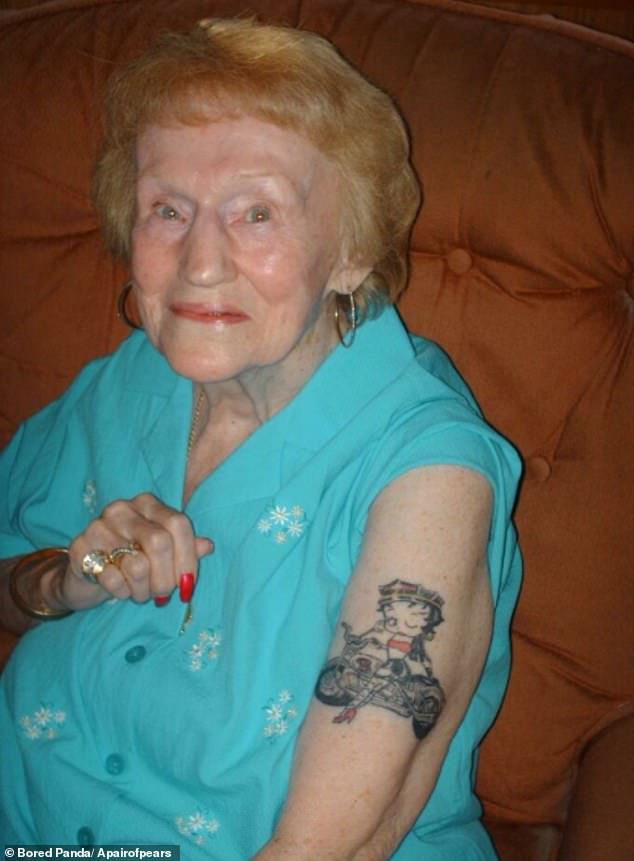 Another person, who is believed to live in the US, revealed their step grandmother waited until the age of 87 to get a tattoo 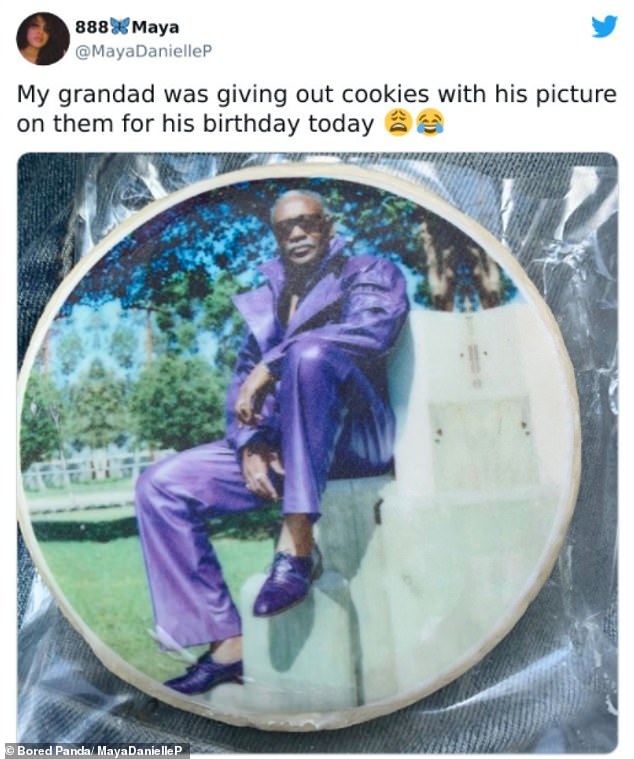 Trendsetting! A woman in California revealed her grandfather has been handing out cookies with his photo on to celebrate his birthday 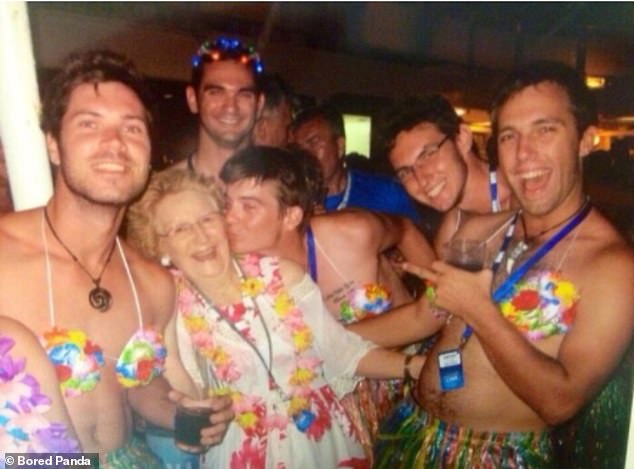 Another snap shows a grandmother, from the US, who enjoyed a drunken kiss during her New Year’s cruise