Home » Lifestyle » How enterprising mothers are retaining senior roles – together

When Lucy Foster posted an ad on LinkedIn for someone to share her role as general manager of strategy at one of Australia’s largest banks, she was inundated with messages from women desperate to snap up the rare job-share position.

Her job-share partner was about to go on maternity leave and she needed to find a replacement. That replacement came in the form of mother-of-two, Catherine van der Veen, who was put forward for the job by a mutual contact. Three years later and the pair are now joint CEOs of financial services business, Generation Life. 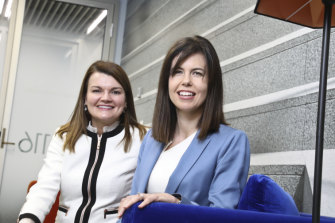 The pair are among a growing number of women who are actively seeking out other women, often mothers, with similar skills and experience, so they can apply for full-time roles together. Traditionally, many women have had to forego more senior and highly paid roles because they were only being offered full-time.

The fast-growing trend, which has also spawned a handful of job-share matching startups, is helping women, particularly working mothers, to find meaningful and well-paid part-time work that also allows them to spend time with their families.

One of the biggest difficulties facing women is finding part-time roles that match their level of experience and pay.

Ms van der Veen firmly believes that working part-time shouldn’t mean taking a lesser role or a pay cut. For her, the job-share partnership was “a match made in heaven”.

Traditionally, many women have had to forego more senior and highly paid roles because they were only being offered full-time.

“I was in a situation where I was looking at other senior roles at the bank I was with at the time and I was mentally preparing to have the fight with people to convince them to take me on a part-time basis,” she explains.

“I was only seeking out full-time roles because they’re the meatier, more challenging ones and they were the ones that were more matched to my experience,” she says.“But that also meant convincing management that I could do it part-time, which is really a fallacy because you can’t really do any of these senior roles part-time. You just get paid part-time.

“So the job share was a no brainer for me, especially with Lucy. We hit it off straight away,” she said.

Lija Wilson from start-up company Puffling – described as a dating site for jobseekers – says finding a good match is key to a successful job-share partnership.

At Puffling, where 92 per cent of the registered candidates are women, consultants match potential job-share professionals with each other and with employers, typically through a joint CV.

“When we started Puffling two years ago, there seemed to be such a negative stigma around job share,” Ms Wilson explains. “When we started to look at the businesses who reported they hadn’t had success with job share, it was typically because it was a case of two part-timers just being thrown together and that was where it was falling down.

“So we started to look at the parallels of online dating and the chemistry and the relationship side and essentially applied it to talent,” Ms Wilson said. The most successful job-share partnerships are the ones that not only look great on paper but have great chemistry.

“They really do need that chemistry, they need that likeability, they need to share purpose and they need to understand where they’re both coming from. Is it a short-term career opportunity or are they looking to be career job sharers?”

Candidates are encouraged to sit down and interview each other to decide if the chemistry is right and if they want to work together before writing a joint CV.

Melbourne-based executive assistant Angela, who recently posted an ad on a closed Facebook group for an “EA work wife … to be my job application buddy,” agrees.

The mother-of-one, who says she is “sick of taking on unchallenging and underpaid part-time roles” believes her only hope of finding a meaningful job as as EA is through a job-share arrangement with the “right person”.

“I’m ready to sink my teeth into a decent role but they’re all full-time,” she said.

Angela, who only wanted to use her first name, recently met up with another mother with similar skills and experience. The pair hit it off and have started applying for full-time roles together.

“We haven’t had any luck yet but we’re desperately hoping we will because part-time roles are just not an option for me. The work is unchallenging and the pay is so dismal I have even considered going back to work in hospitality.”

“There is the old phrase, you cannot be what you cannot see, and the reality is there are a lot of women and men out there who don’t want to take on senior roles because the traditional structure of the role requires 100-hour working weeks and I think there’s a huge talent wastage as a result.”

The pair say the benefits to employers can be enormous. “We have double the networks … we bring different technical experience …  and you have two minds wrestling over some pretty big decisions to get a better outcome,” says Ms van der Veen.

“Our chairman likes to say that it is very rare in the industry to find people with our combined 40-plus years of experience, with the energy of people in their early 40s,” she laughs.

“For us, it’s a no brainer. I have two young boys and Lucy has two young girls. I want a full life and I want an active role in raising my children. I have made no secret of that and this allows me the best of both worlds.”