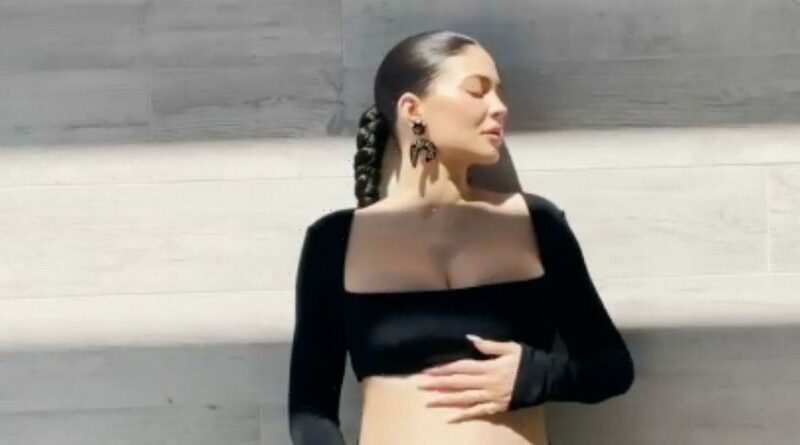 Kylie Jenner took to her Instagram earlier this week to announce that she and Travis Scott are expecting their second child together.

Thankfully this time around, Kylie spared her fans the anticipation as to guessing whether she was pregnant or not by posting a video to her social media just like her first announcement with Stormi in 2018.

In the video we see behind the scene shots of her journey up to this point, which got us thinking about all the exceptional pregnancy reveals we have been presented with by some of our fave stars over the years.

In the heartwarming video, at the end we get to see Kylie standing against a light grey stone wall cradling her growing baby bump in a chic black crop top and skirt.

The clip which has already been viewed nearly 121 million times ends with daughter Stormi kissing the bump before giving it a big sisterly hug.

Beauty entrepreneur Kylie Jenner kept fans in the dark for months amidst endless pregnancy speculation, and finally revealed she had given birth to her daughter Stormi in an 11 minute video clip back in February 2018.

The video clip has now been watched nearly a billion times – and showcases clips of Kylie throughout her pregnancy in cute bump looks.

Earlier this year Little Mix singer Leigh-Anne Pinnock surprised everyone with an unexpected announcement that she was pregnant with footballer fiancé Andre Grey’s baby.

After giving birth in August, it was revealed that Leigh-Anne was actually expecting twins all along.

If one Little Mix pregnancy wasn’t enough, days after bandmate Perrie Edwards announced that she and footballer boyfriend Alex Oxlade-Chamberlain were expecting their own bundle of joy.

Taking to her Instagram, Perrie shared the exciting news with two gorgeous black and white photo’s.

One of herself and Alex holding her bump with another of the couple all smiles.

Beyoncé and rapper husband Jay Z didn’t hold back when they announced they were expecting twins – Beyoncé famously posed in satin underwear with a lime green veil on Instagram, in front of a wall of flowers no less.

After months of speculation, Cheryl finally announced she was pregnant with One Direction member Liam Payne back in 2017, when she posed for a L’Oreal campaign amongst British icons such as Katie Piper and Helen Mirren.

American rapper Cardi B took influence from Beyonce’s first pregnancy announcement and shared her news with the world via TV. Whilst making her SNL debut, Cardi B performed ‘Be Careful With Me’ and had the camera zoom out to reveal the star in a tight white dress and a growing bump – cute.

Just weeks before they sent the internet into overdrive with their tell-all interview, Prince Harry and Meghan Markle announced their happy news of a second baby on the way – as they posed in a beautiful image – with Meghan opting for a lightweight and delicate Carolina Herrera dress.

Popstar Katy Perry was never going to share her baby news by halves – oh no. In true Katy Perry fashion the singer shared her, and fiancé Orlando Bloom’s exciting update as part of her music video for "Never Worn White". At the end of the video, we see the singer wearing a tulle see-through dress and holding her bump.

When Rochelle announced her and hubby Marvin Hume’s second baby was on the way, Rochelle posed in her underwear and a white shirt – in a beautiful black and white image on her Instagram.

Not long after welcoming baby Paul, Sam Faiers shared her and partner Paul Knightley were expecting their second child. Posting on Instagram, Sam posed in a cute cropped short set alongside Baby Paul to share their happy news.