HEFTY pension charges are eroding the value of retirement pots and could end up costing savers hundreds of thousands of pounds.

MPs have criticised workplace pension providers for hidden charges and a lack of transparency, which is pushing up the amount people pay in fees. 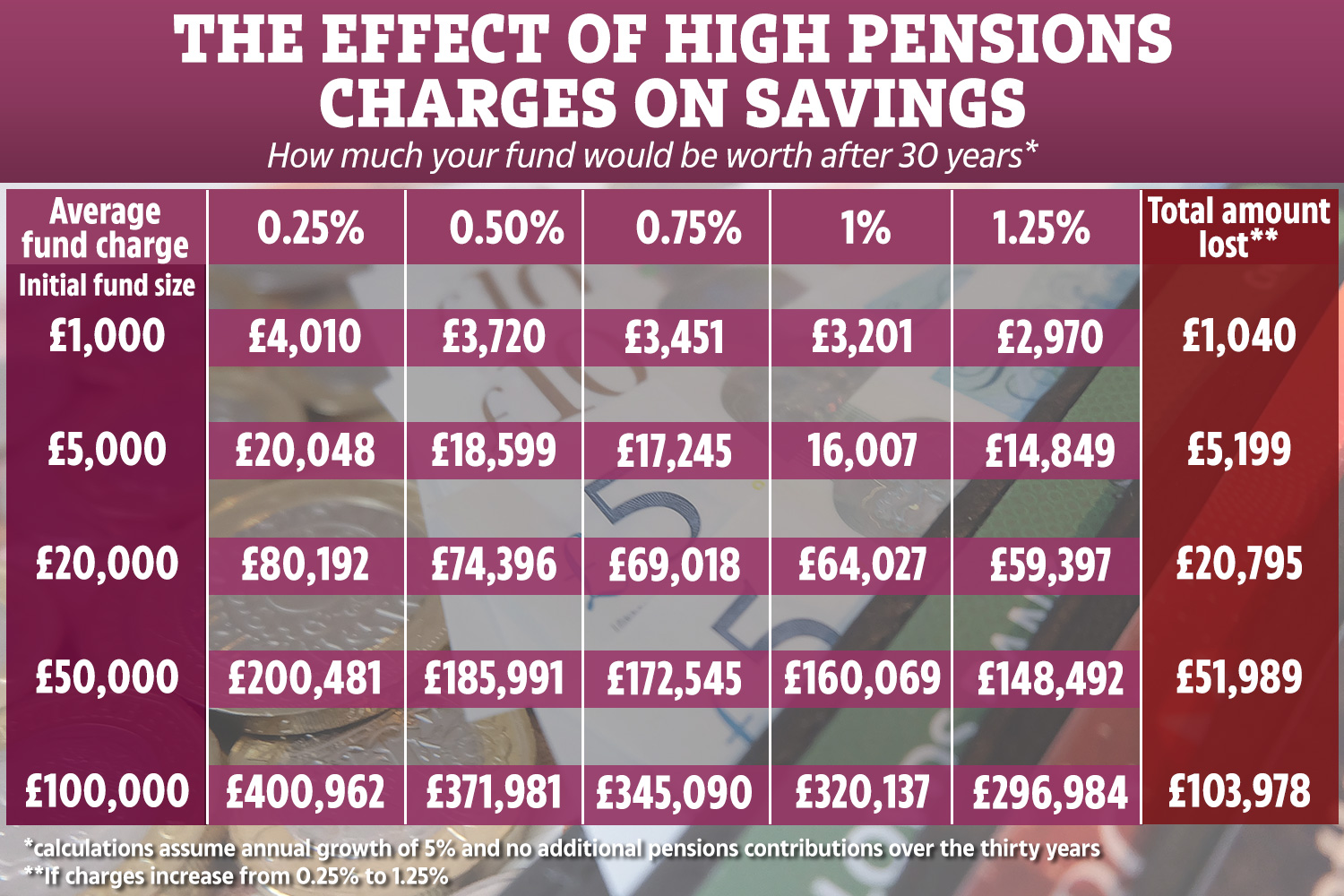 In some cases, there are fears that smaller pension pots could be completely eroded by flat-rate costs.

What's the problem with pension charges?

Workplace pensions have their charges capped at 0.75 per cent a year, but loopholes mean that some companies charge significantly more than that in hidden charges and transaction fees.

On top of this, even a small increase in charges can make a huge difference to a pension pot over time.

There are two main issues.

The first comes with small pots that people are no longer adding money to.

Because the value of these investments is low and no new money is being paid in, even small flat-rate charges can wipe out an entire pension pot.

For instance, Now: Pensions has been criticised for charging a flat fee of £18 a year on top of a very low management charge of 0.3 per cent.

If you have a small pot of only a few thousand pounds, then that £18 annual charge makes up a big percentage of your total savings and will eat away at it over time – potentially stripping you of all your hard earned cash.

What is the government doing to crackdown on expensive fees?

There's already a cap on the fees that workplace pension providers can charge.

Now, the work and pensions select committee is calling for the government to do more to protect savers as it says the investment industry can't be trusted to regulate itself.

Its study found that because of the array of annual fees and charges that pension funds can impose, a pensioner with just a few hundred pounds saved up could see it “completely eroded”.

It is also urging the industry to continue work on the Pensions Dashboard, which would allow savers to see all their pots in one place

“The select committee is calling on the Government to shine the searchlights into that part of the financial industry that has settled down to misinforming, mischarging, overcharging and making a fat living off the hard-earned savings of pensioners."

Because people move jobs frequently, loads of us have lots of small pots dotted around.

Individually these are all low in value, but when you add them together they can make up the bulk of someone's total savings.

If all the pots face these flat-rate charges, savers could find that several of their pots have totally depleted by the time they retire.

The second issue comes when you look at medium and larger sized pension pots.

Here, a charging structure such as the one used by Now: Pensions would actually be better because the flat-rate of £18 a month is would be a tiny percentage of a total pot worth tens or hundreds of thousands of pounds.

Whereas if you're paying a charge based on a percentage of what you've saved, the more you have the more you pay.

In theory, the government cap of 0.75 per cent is supposed to make sure that people aren't paying through their noses for their workplace pensions.

But because of hidden fees and charges, often the true cost of fees is substantially higher – experts estimate as much as 1.5 per cent.

These tiny changes can made a massive difference to how much a pension is worth at retirement, costing savers hundreds or even thousands of pounds.

City watchdog, the Financial Conduct Authority (FCA) says that adding an extra charge of just 0.1 per cent will take a £2,500 slice from the average UK pension.

Adding an extra 1 per cent will cost people tens of thousands of pounds.

How can I avoid paying hefty charges on old workplace pension pots?

If you've got lots of small workplace pots that you're no longer paying into, you might be better off consolidating them into one big pension.

There are several advantages to this.

The first is that by having your savings all in one place, you'll only pay one set of fees.

You can also choose which pension provider you want to transfer the different savings into, so you can pick the best one for you.

It also makes it easier to keep track of your money.

You might want to move all your money to whichever of your existing pots has the best fees, or you could move it all to your current employer pension (if you have one).

Alternatively you may wish to move money to a private pension or use a consolidator service, such as Pension Bee.

Make sure you compare and contrast your options carefully, so that you're picking the best home for your savings.

You'll need to look at fees and charges, but also might want to consider the investment options available.

If any of your pots are over £30,000 you'll need to get independent financial advice, but even if you have lots of smaller pots you should consider speaking to an IFA.

Am I on track for a comfortable pension?

IF you are only putting in the minimum amount for your workplace pension then you are not saving enough for a comfortable pension..

The earlier you start saving, the less you'll need to put away each month.  Here's how much you'll need according to consumer group Which?

How can I avoid paying hefty charges on current workplace pension pots?

If you're worried about your 'live' workplace pension – you've unfortunately got fewer options.

This is because in the UK our employer picks our workplace pension provider, not us.

In theory, you could choose to opt out of a workplace pension, but the amount your employer pays in will be worth lots more than the fees you're paying, so you'd end up worse off over all.

You could try and speak to your HR department about the company's choice of pension company.

When you reach retirement age, you have much more control over where your savings are kept.

At this point, if you choose to keep your money invested you can shop around for the best provider.

Which? has a good guide to different pension company's fees and charges and how to decide between them.

Millions of people are heading for a retirement shock as they aren’t saving enough.

End of pensions mis-selling? Advisers are to be banned from charging more for advice when transferring savings.

You can see what you might look like in the future — now start planning for it with a pension.

Survey finds 23% of patients have lied to their doctor — but why?