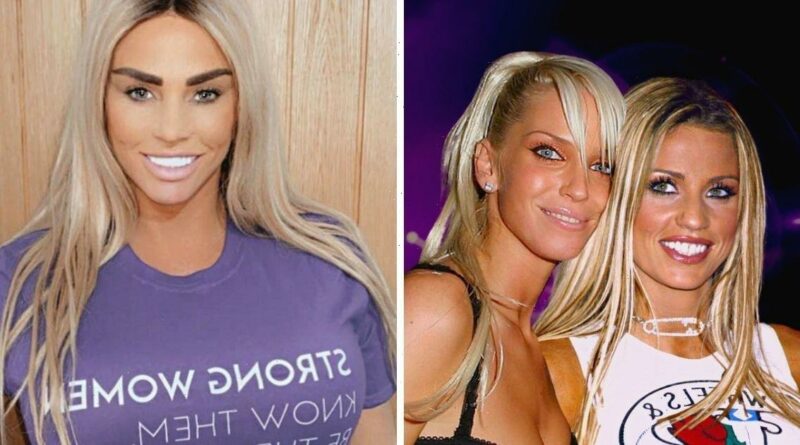 Sarah Harding has tragically passed away on September 5, 2021, following a 12-month battle with breast cancer, and numerous friends have posted tributes to the star, one of which was Katie Price.

Sarah, 39, had a close friendship with TV personality Katie Price, 43, and the two were in fact such good pals that the late Girls Aloud singer was actually a bridesmaid at former glamour model Katie's wedding to Peter Andre in 2005.

Katie, who posted an image of herself and Sarah on Loose Women taken few years ago on Instagram, wrote of how devastated she was upon hearing the news of her old pal's death earlier today.

Here we take a look inside the friendship that blossomed between the two starlets after they both shot to superstardom in the early 2000s.

Sarah was a bridesmaid at Katie's first wedding

Katie's 2005 wedding to Peter Andre was nothing short of iconic, and despite the star going all-out for the lavish pink and white bash, she hadn't let anyone in on who made up her bridal party.

The couple got hitched at the fancy Highclere Castle in Berkshire, also known as Downton Abbey.

Katie, then 26, arrived in a pumpkin-style pink carriage pulled by six white horses down the estate's mile-long drive.

The bride dazzled in a princess-style pink tulle and satin dress designed by Isabell Kristensen, which boasted a ginormous seven-metre train.

After marrying in a civil ceremony in the mansion's library, Katie and Peter had a blessing in the Secret Garden followed by a reception in a marquee decorated with bay trees, pink feathers, crystals, a 10-foot chandelier and two flower-covered thrones.

Although everyone knew about Kerry and Katie's friendship seeing as the two bonded on I'm A Celebrity… Get Me Out Of Here back in 2003, It wasn't widely known that Sarah and Katie were close pals.

Kerry Katona posted a throwback picture of herself, along with Michelle and Sarah on Instagram in November 2017, as she reminisced over the good memories.

The star-studded wedding had plenty of celeb guests in attendance, including Charlotte Church, Jennifer Allison, Wayne and Coleen Rooney and Paul Gascoigne.

Back in 2008, Katie revealed that she and Sarah had grown apart, but she had no idea how or why.

The star told New! magazine: "Pete looked at a picture of me with my bridesmaids the other day and said: 'Which ones are still your friends now?'

"And there are only two – Michelle Clack and Michelle Heaton.

However, her 2010 autobiography, Jordan, mentioned Sarah in its acknowledgements.

It read: "Rachel, Melodie and Danielle, Sarah Harding and Michelle Heaton, I'll try to not be so busy in future so we can meet up more!"

Katie asked Sarah to get back in touch earlier this year

Back in April this year, Katie urged the Girls Aloud star to get in touch.

Appearing on Steph's Packed Lunch, Katie spoke of her devastation over the death of former Big Brother star Nikki Grahame.

She then went on to share the importance of reaching out to people during lockdown and urged Sarah, who battled breast cancer, to get in contact with her.

"One of my friends got murdered, she was from Brighton and owned a restaurant. We've lost two people due to COVID, now I've lost Nikki.

"Then I've heard about Sarah Harding, she was my bridesmaid. If Sarah is watching, get in contact, I would love to see you too."

Posting an image of the pair together on Loose Women, Katie shared her devastation over the loss.

She wrote in a caption: "I'm devastated to hear my friend, @sarahnicoleharding has passed.

"You were always such a genuine and honest person, I will remember the all laughs we used to have back in the day…"

The star ended the post: "I always valued Sarah's friendship and my thoughts go out to her family and friends."

For more juicy gossip on your favourite stars, sign up to our daily newsletter here