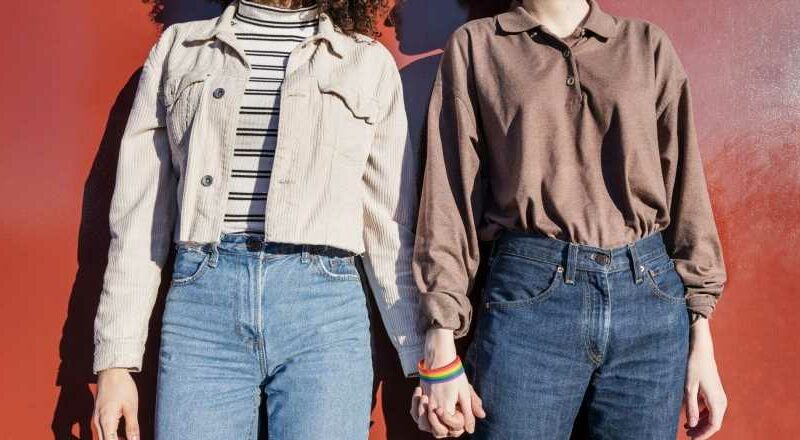 It’s good to remember that not everyone in the world is straight, cis-gendered or even gender binary. Here, the authors of Coming Out Stories, Emma Goswell and Sam Walker outline some simple ways we can all be better allies to the LGBTQ+ community today and every day.

Not everyone in the world is straight, cis-gendered or even gender binary. LGBTQ+ people are everywhere and don’t fit the stereotypes we see all around us. Not all gay men are camp, not all lesbians are butch and you sure as hell can’t tell someone’s gender identity just by looking at them. So next time you ask that cute guy if he has a girlfriend or ask a woman what her husband does for a living, know that you might have put someone in an awkward position. I know of plenty of trans people who have been told “Oh my god you’re the first transgender person I’ve ever met”. I can assure you that probably isn’t true.

No matter how someone might appear on the outside it’s up to them how they identify. Mis-gendering people or using their dead name (for trans people, the name before transition) can cause a huge amount of hurt. If you get it wrong, just be honest and say, “I’m sorry, I made a mistake” and move on.If someone identifies as non-binary, refer to them as “they” or “them”.Yes, it can feel a bit of an effort to start with, but it becomes second nature really quickly. Gender fluidity is not a new phenomenon. Even the most cursory of Google searches shows a rich account of non-binary and gender-fluid people in history from all over the world. Sam Smith has been through a lot of abuse to try and have their pronouns respected. Think of gender as a fluid scale rather than binary and respect others’ identities. To normalise gender fluidity, a lot of cis-gendered people are announcing their pronouns. Adding it to social media profiles, email footers or business cards makes it clear how you identify and shows solidarity with trans and non-binary people.

If you hear homophobic or transphobic language –call it out for what it is. Challenge people. There’s no such thing as casual homophobia or casual transphobia – words and attitudes do hurt. The overuse of the word ‘gay’ as a derogatory term in playgrounds is just one example. Many LGBTQ+ people suffer huge amounts of shame, guilt and self-loathing brought on by years of hearing slurs. It’s one reason people battle with their identity, fear rejection and really struggle to come out. Yes, it can be tricky if the person rolling their eyes at the lesbian couple on a soap opera is a family member, but a simple comment like ‘They’re just people, who fell in love and also brush their teeth and go to the supermarket and do the hoovering, like we do!”can make a difference. There is more that unites us than separates us.

We would never ever suggest that anyone put themselves in danger, but if you see or hear anyone being abused for their sexuality or gender identity don’t just stand by. The statistics are shocking and getting worse. In 2017, two in five trans people had been the victim of a hate crime. If you see a crime in action and people are in danger call 999 or you can report online too. Often, confronting the bully or bullies isn’t possible to keep yourself safe and can really exacerbate a tense situation. But, if you’re able to, go and talk to the person who is being attacked. If you’re on public transport, sit down next to them, ask them if they’re ok and talk about anything – the weather – what’s on TV. This not only shows your solidarity but helps calm them down and feel safer until you can get further help.If you see hate speech online or on social media – it’s usually very easy and quick to report that too.This all makes a difference.

Why not try and make your workplace more inclusive? Do you have an LGBTQ+ group? Could you commemorate Pride, LGBT History Month, Trans Day of Remembrance or National Coming Out Day? Could you put up posters saying homophobic or transphobic language won’t be tolerated or ones celebrating LGBTQ+ couples? And if you don’t have a workplace, what’s stopping you from celebrating Pride anyway? Who doesn’t love rainbows, glitter and celebrating equality? Join the party! No one is trying to recruit you. Remember homophobia is taught and you can respect and celebrate a community while recognising that it isn’t for you.

If you’d like to help some of the most vulnerable in society think about supporting a charity such as the Albert Kennedy Trust. They’re there to help young LGBTQ+ people who have been thrown out of their homes or are at risk of homelessness. Mermaids is also a fantastic charity supporting children and young people who are trans or non-binary and their families. And then of course Stonewall does incredible work campaigning for LGBT equality and also ensuring that schools are LGBTQ+ inclusive and free from bullying. There are so many incredible organisations out there. Donating, volunteering, helping to raise their profile through social media mentions – it all helps.

Find out what’s really going on in the LGBTQ+ community by broadening your horizons with your news consumption. You’d be surprised just how many shocking examples there are people being denied their basic human rights across the globe because of their sexuality or gender identity. Conversely, you’ll also find heart-warming stories of people coming together to support each other and fight injustice. And if you’re really lucky you’ll find stories about gay penguins bringing up baby chicks together. If you’re looking online, you could start with Pink News, Gay Star News and the LGBTQ+ sections within your favourite publications. As we said – so many LGBTQ+ stereotypes in some mainstream media are just that – stereotypes. Cast your net a little wider and get the full picture.There is fantastic queer literature, podcasts, film and TV out there too, from Call Me By Your Name to Schitt’s Creek – enjoy!

Love the LGBTQ+ people in your life

If you’re lucky enough to have someone in your life come out to you then embrace it. Embrace them. If you really are shocked, then try and contain that reaction and tell them it doesn’t matter. It might mean the visions you had for their future may be different, you might be worried that they won’t be happy. Those concerns won’t last. It will be OK. Remember, being LGBTQ+ is just a small part of what makes them them. They are still the child/sibling/parent/friend they always were. Tell them you love them. At the end of the day that’s all we all want – to be loved and accepted for who we really are.

Coming Out Stories, a new collection of moving personal stories about coming out across the LGBTQ+ spectrum from people of different ages, eras and cultural backgrounds, is out now.