The big business lobby that represents Australia's mining, banking and technology giants and the Australian Council of Trade Unions make an unusual partnership. But both have backed nationwide, government-funded paid pandemic leave to keep workers with coronavirus symptoms at home.

"Paid pandemic leave is now an essential public health measure," the Business Council of Australia's chief executive, Jennifer Westacott, and ACTU secretary Sally McManus wrote in an open letter to the federal government urging it to adopt the measure.

Shortly afterwards, Prime Minister Scott Morrison announced one-off $1500 "disaster payments" to help Victorians isolate in place of a similar payment from the state government – but the federal government has not called it paid pandemic leave.

So is the government's $1500 payment the same as paid pandemic leave? And what problem is it supposed to fix? 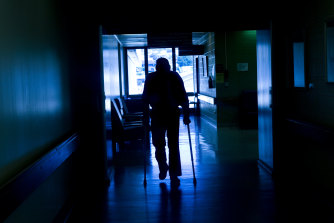 Aged care has been one sector where workplace transmission has occurred.Credit:Nic Walker

What is paid pandemic leave?

It's extra paid time off that workers can take if they need to get tested and isolate because they have coronavirus symptoms or if they have come into contact with someone who may have the virus. The goal is to encourage people to stay home from work if they have COVID-19 symptoms, by removing the financial disincentive of losing income.

Basically, the government's $1500 payment is a form of paid pandemic leave but it doesn't go as far as some groups would like. Different groups have different proposals for how paid pandemic leave should work. For example, it could be paid for by employers, as with sick leave, or be reimbursed by the government as with JobKeeper; it could require an application over the phone or a call to your boss; it could be available once or multiple times; it could be a flat sum for everyone or equal an employee's normal wage.

What's the case for pandemic leave?

About a quarter of Australian employees, and even more independent contractors, are casual workers and do not have paid sick leave. About half a million are in Melbourne, where the most coronavirus cases are, and nearly 550,000 are in Sydney. Other workers may have used up all their sick leave for other medical conditions before developing COVID-19 symptoms.

Paid pandemic leave advocates, which include Labor and the Greens as well as the ACTU and the Business Council, argue workers without leave have contributed to the spread of coronavirus in Victoria. The preferred model of the Business Council and the ACTU is government-funded pandemic leave, rolled out nationally, that workers could claim just as easily as sick leave. They argue it would avoid the hassle of workers phoning a 1800 number because they would go through their boss; and it would avoid any financial loss for workers who usually earn more than $1500 a fortnight.

Victorian Premier Daniel Andrews said in July that about 80 per cent of coronavirus cases had been caused by workplace transmissions, including in industries such as aged care, security and meat processing, which employ significant numbers of casual workers.

Health experts have argued that paid pandemic leave will mean those workers are less likely to go to work while sick for two reasons: it will let some workers on the breadline afford to stay home and it will encourage others who might be wavering on whether their symptoms do really indicate coronavirus to make the right choice and stay home.

What's the case against it?

That depends on how the paid pandemic leave would work.

While some large employers such as Coles and Woolworths have said they will pay casual staff who have to isolate, business groups say most employers cannot afford do the same when many are already struggling because of the pandemic.

In response to the growing outbreak in Victorian aged care facilities, in July the Fair Work Commission, which is the national industrial tribunal, gave all aged care workers access to paid pandemic leave for a minimum of three months. Employers have to pay for that, which prompted complaints from industry groups at the time that nursing homes and labour providers would struggle to afford it and find enough staff to replace those on leave.

If pandemic leave is paid by employers and reimbursed by the government, as with JobKeeper, it would be another strain on the public purse. Even then, the Australian Chamber of Commerce and Industry, which describes itself as the country's largest business group, has argued the cost of handing over money in advance, while waiting for it to be reimbursed, would hurt small businesses. "[They] can’t afford to keep writing cheques,” chamber chief executive James Pearson says.

The federal government also argues workers in states outside Victoria do not need paid pandemic leave. A spokesman for the Prime Minister's office said in early August that the other states "are successfully addressing community transmission through testing, tracing, local health response and hygiene".

There is no timeline for a decision on paid pandemic leave. The Greens have a bill to introduce full paid pandemic leave nationally that they will bring to Parliament when it sits in late August, which could bring the issue to a head.

What support can people get right now?

The Victorian government gives workers who have been tested a $300 one-off payment if they do not have any sick leave they can use. To apply, call 1800 675 398.

The federal government is providing $1500 grants to those who test positive or are close contacts of a confirmed case and also lack sick leave. The hotline number is 180 22 66. That will take the place of an existing $1500 Victorian Worker Support Payment for people in the same position.

People can also keep receiving JobKeeper and JobSeeker, if they are on those programs, while in isolation.

Queensland has a similar $1500 grant program and some big employers have made similar grants available.

If you'd like some expert background on an issue or a news event, drop us a line at explainers@smh.com.au or explainers@theage.com.au. Read more explainers here.