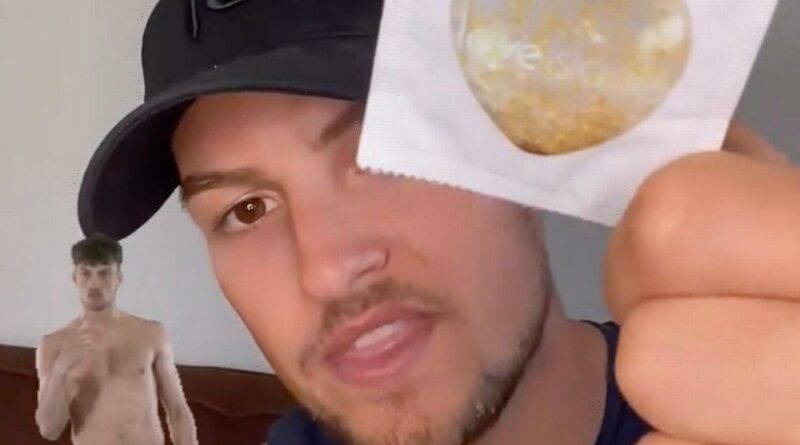 Hugo Hammond flashed Love Island-branded condoms he 'didn’t get to use' while hinting that others contestants did in an Instagram story Q&A yesterday.

The 24-year-old PE teacher, who was sent home from the love island villa alongside Amy Day, 25, was asked by a fan whether anyone “held his wood” while in the villa.

Fans were convinced the duo got down and dirty after night-vision cameras showed Hugo on Amy's side of the bed, but he denied any funny business in a fan Q&A.

He said: "I absolutely love this comment, straight to the point. Makes me chuckle. No, unfortunately no one did, however Love Island did provide us with these Love Island condoms and obviously I didn't get a chance to use mine. However, do you think anyone got the chance to use theirs?"

Fans of the reality series have been left baffled by the coded language that the stars use to describe their nocturnal activities on the show.

The girls recently grilled Chloe Burrows, 25, over how far she had gone with semi-pro footballer Toby, 22, asking her if she did NVQ2 – to which she responded: “No, just NVQ1s all round.”

Chloe seems to have resisted temptation, though, as she replied: "I wrote my name on the paper, and I was gonna do it but was like 'no, Chloe, it's too soon'. I'm so ready, but I just feel I don't want to…”

Jake Cornish, 24, used a different metaphor altogether to describe his sexual relationship with girlfriend Liberty Poole, 21: "We were at St Mary's stadium last night, both teams were ready to rock and roll. The whistle got blown soon as well, before the lights even went down, and the floodlights come on and it was literally – sprinklers erupted!"

One viewer said: “What is worse from this year’s Love Island? The football & NVQ themed sex analogies or the amplified kissing noises?! I genuinely can’t decide.”

Due to the coded references it’s hard for fans to know exactly what has taken place between the sheets, but Hugo’s rhetorical question certainly leaves scope for viewers to wonder how far each of the couples have gone.

But perhaps it’s no surprise that Hugo didn’t get the chance to use his Love Island contraception after he described his quest to find love as ‘tragic’ in his exit interview.

Amy labelled Hugo as ‘fake’ following her departure from the villa, and she seemed to confirm their lack of nighttime activity as she said: “I do wish I’d opened up and re-coupled with someone else. Also, 100 per cent I did not sleep with Hugo.”

It’s fair to say that love is definitely not in the air after the duo’s tense interaction on Love Island Aftersun on Sunday night, after Amy said the teacher acts like it’s “the Hugo show” and added that he is “terrible with women”.