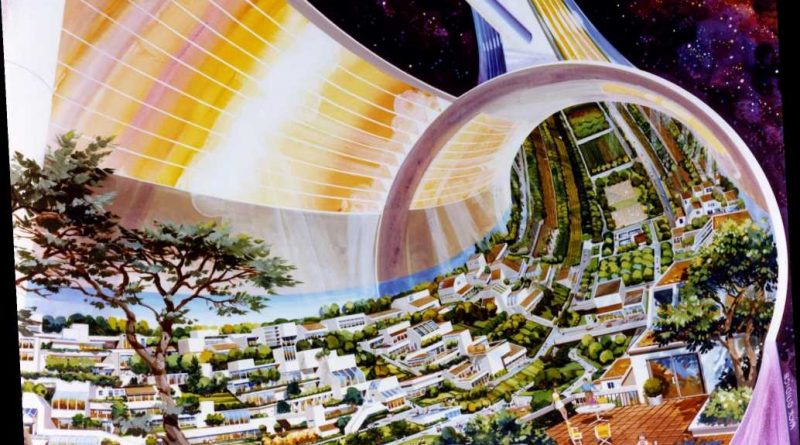 Humans could live on giant orbs floating in the asteroid belt between Mars and Jupiter within the next 15 years.

That’s the bonkers claim made by top scientist Pekka Janhunen, who says millions of people could inhabit a megacity in space by 2026.

Dr. Janhunen, an astrophysicist at the Finnish Meteorological Institute in Helsinki, described his vision in a research paper published this month.

He laid out the blueprint for floating “mega-satellites” around the dwarf planet Ceres, which lies roughly 325 million miles from Earth.

“The motivation is to have a settlement with artificial gravity that allows growth beyond Earth’s living area,” Dr Janhunen wrote.

The vast majority of plots to settle distant worlds revolve around the Moon or Mars. This is largely due to their close proximity to Earth.

Dr. Janhunen’s proposal, on the other hand, looks a little further affield.

His disk-shaped habitat would boast thousands of cylindrical structures, each home to more than 50,000 people.

Those pods would be linked by powerful magnets and generate artificial gravity by slowly rotating.

Residents would mine resources from Ceres 600 miles below the settlement and haul them back up using “space elevators”, Dr Janhunen said.

“Lifting the materials from Ceres is energetically cheap compared to processing them into habitats, if a space elevator is used,” he wrote.

“Because Ceres has low gravity and rotates relatively fast, the space elevator is feasible.”

Ceres – the largest object in the asteroid belt – is the best destination for off-world settlements due to its Nitrogen-rich atmosphere, Dr Janhunen added.

This would allow settlers to more easily create Earth-like conditions than those colonizing the harsher, carbon dioxide-rich environment of Mars.

That doesn’t solve the threats of rogue asteroids or space radiation, though Dr. Janhunen, who worked with a number of Finnish researchers on the paper, has thought of that, too.

He proposed that giant, cylindrical mirrors placed around the mega-satellite could protect it from bombardment of all kinds.

Those mirrors would also focus sunlight onto the habitat for the growth of crops and other plantlife.

It all sounds pretty rosy, but Dr Janhunen also highlighted a number of issues with the plans.

For one, there’s the not-so-small hurdle of actually flying people to Ceres.

Nasa sent a probe there in 2015, a trip that took a staggering eight years – far too long to sustain hundreds of people using current technology.

Dr Janhunen also admitted that the energy required to lift building materials from Ceres to orbit would represent a major obstacle.

The research was published January 6 in the pre-print journal Arxiv. It’s not yet been peer-reviewed by scientists.