Home » Lifestyle » ‘I am addicted to work and creating new things’: Tim Minchin 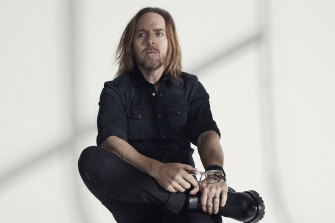 “I realise now, as a parent, that mum’s love for us, which manifested itself in anxiety, was the seriously anxious love you have for your children.”Credit:Damian Bennett

My maternal grandmother, Val, lived up the road from us in Swanbourne, a coastal suburb of Perth. She was a nurse in Australia during World War II. Her love had a certain hospital-corner aspect to it, which she passed on to my mum, Ros. When we four kids were sick, Mum was like,
“I know it’s hard but dry your tears, let’s not be ridiculous about it.”

Mum is the burning, furious nuclear furnace at the centre of our curiously loyal and close family. She has gone from being an incredibly healthy 71-year-old to being a very sick woman. I visited her in Perth recently, and have fallen in love with her again. I realise now, as a parent, that her
love for us, which manifested itself in anxiety, was the seriously anxious love you have for your children.

For a lot of boys who go to a same-sex school, as I did, women hold this sort of mystery, but they weren’t mythical to me. They weren’t a siren on a rock or a princess in a castle, but rather, the stuff of my life. My grandmother, mother, two sisters and cousins are pretty fierce women.

My first crush was Jodi Aitkin in year 8. I looked up her address in the White Pages to find out where she lived. I never told Jodi or kissed her. She was so far out of my league.

I got to know my wife, Sarah, during first year at the University of Western Australia. We became good friends, and started talking about our relationships, which is often the way that, subconsciously, you tell the person you quite like about the negatives of your partner, almost seeding the decay.

Sarah’s resting face isn’t an affirming one, but I could make her laugh. When you make hard-to-impress people laugh, it’s very addictive if you’re an egotistical f…k like me.

There’s an incredible pragmatism about Sarah. She just f…ing gets on with it. We don’t feel the need to unpack the corner of every emotional closet we stumble into, and we understand that life has challenges.

Sarah gave up social work as my career took off. Yet if the tables were turned and she were an artist gathering an audience very quickly, and I had a job I hated, would I have acted likewise and supported her creative aspirations? It’s a difficult hypothetical, but much more confronting is the question of what space I have left for her to see what else there is.

I am addicted to work and creating new things. Sarah can’t compete with that. She concludes she is happy, and there is profundity in her role as parent. She writes beautiful short stories but she isn’t wired to be hugely ambitious. Or maybe if I weren’t around, she’d feel more confident in her writing.

We have this incredible life together. We are a team, one of whom goes out and razzle-dazzles and returns with some dosh. I think she likes me and my work but there is no power differential in our relationship.

My 14-year-old daughter, Violet, is an intellectual, to her great cost. When I realised how good her comprehension was at age nine, I starting feeding her books. I kind of wish I’d said just, “Read Harry Potter and chill out,” because she’s fiercely introspective and complex in her thinking.

I talk about being attracted to strong women, but [musician] Amanda Palmer is hardcore. She is fiercely defensive of her intellectualism and her individualism.

We first met around 2008. We had a three-hour lunch in Boston and didn’t stop talking. I didn’t feel like I was getting a crush on her. Rather, I’d met someone halfway between a woman with whom I could love and one with whom I could have a rivalry.

Kids were an early conversation topic, as I already had them. She thought she wouldn’t have any. One thing people like Amanda don’t come across is men willing to tell them they are wrong. I told her what I thought, and she now has a son. She has made this career and this kid all one. It’s amazing to watch.

Tim Minchin’s new album, Apart Together, is out now.

This article appears in Sunday Life magazine within the Sun-Herald and the Sunday Age on sale November 29. To read more from Sunday Life, visit The Sydney Morning Herald and The Age.