Australia’s election watchdog is taking legal action against Liberal National MP Andrew Laming for five social media posts in the lead-up to the last election that did not declare they were authorised by the Queensland politician.

Dr Laming on Tuesday apologised for the lack of authorisation, saying “nothing is more important than the integrity of our political process, and I apologise for the lapse of process”. 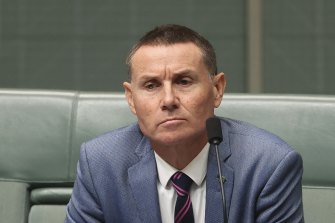 Dr Laming, who has announced he will quit politics at the next election, in 2018 set up a Facebook page called “Redland Hospital: Let’s fight for fair funding”, which repeatedly criticised the Labor Party.

While his involvement was declared in the page’s “About” section, it did not include any party branding or authorisation on the main section of the page or in many of the posts.

The Australian Electoral Commission has now found that five of the posts between December 2018 and May 2019 lacked the appropriate authorisation, and filed an application in the Federal Court on Tuesday seeking civil penalties against the MP.

Dr Laming said he was surprised by the AEC’s decision but conceded the lack of a page authorisation was a mistake.

“I respect the AEC decision and I will assist them to resolve the matter by conciliation,” he said.

“While the integrity of political communication must be safeguarded; these five posts amount to just 2 per cent of the page posts, with an average reach of six people. The entire page is less than 1 per cent of the reach of my AEC-authorised pages.”

According to Dr Laming, the posts in question reached about 22 of his electors in the lead-up to the 2019 election. The page was shut down after the Redland Hospital, which is in Dr Laming’s electorate, received funding commitments for upgrades after the 2019 election.

One post read: “Labor in a lather, calling this a fake page. Apparently, none of us are real. Read the ‘About’ tab which makes it clear Andrew Laming was involved in establishing this page and maintaining it. So what! We just want our $39 million back.” 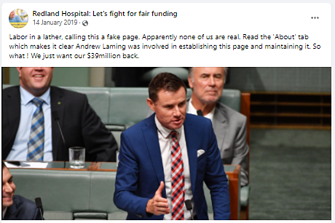 The Facebook page run by Liberal MP Andrew Laming has now been shut down.

The Brisbane-based MP came under criticism earlier this year for operating more than 30 Facebook pages and profiles under the guise of community groups.

Dr Laming said he had consistently acknowledged he had multiple community Facebook pages, including one for each suburb in his electorate so that he could “better tailor information relevant to those communities”.

New laws came into effect in 2018 that extended the requirement for politicians and parties to authorise their messages to modern communication channels including social media, bulk text messages and robo-calls.

Dr Laming said all the community pages he ran were created before the new laws came into effect.

“My office was confident at the time that we were complying by avoiding federal electoral matter,” he said. “Where there was perceived doubt at the time, individual posts on this page were correctly authorised.

“I do not dispute the AEC view that the page did in effect promote me and was critical of another political party, and for those reasons, page authorisation should have occurred. Nothing is more important than the integrity of our political process, and I apologise for the lapse of process on this occasion.”

Dr Laming in October withdrew an apology to two women who alleged they were trolled by him online, saying the accusations against him were not genuine and his critics hadn’t made formal complaints to avoid scrutiny of their claims.

The AEC confirmed it had launched proceedings in the Federal Court against Dr Laming.

“The AEC alleges that Dr Laming published unauthorised electoral matter in the form of a Facebook page, ‘Redland Hospital: Let’s fight for fair funding’ and that this contravened the Commonwealth Electoral Act 1918 requirement that material promoting one candidate or political party over another comply with the authorisation requirements of the act,” the AEC said. “The AEC will not be making any further comment as this matter is now before the court.”