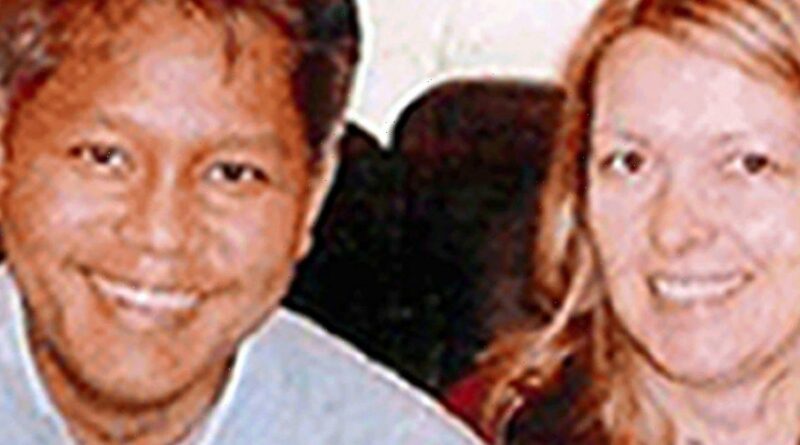 Mum of four Chrissy Handy, 57, who lives in Flintshire, Wales, was swindled out of over half a million pounds, but refuses to be bitter. She now wants others to learn from her mistakes and has written a book about her upsetting ordeal…

‘My life imploded with a warning phone call from my sister-in-law in August 2006.

“I hope you’re not financially involved with Alexander.”

Those eight words changed everything. Soon I’d learn that Alexander de Rothschild, the man who’d swept me off my feet and fathered my baby, was a callous conman.

It began in a Cheltenham coffee shop in June 2003. “Do you mind if I take this seat?” asked the well-spoken stranger.

“Help yourself,” I shrugged, reading my paper

Only when I looked up five minutes later, and saw the other empty tables, did I realise this besuited, charming gentleman had sought my company.

“I’m Alexander,” he grinned, adding that he was a financial consultant.

We chatted and the next week he returned. On the third meeting he’d already bought my coffee when I arrived.

He was so bright, he told me, he’d got a scholarship to Eton, then Oxford University.

Naively, I didn’t question him.

“I’d like to take you for dinner,” he said. And his wooing campaign began.

There were flowers and flattering texts: “I can’t stop thinking about you.”

Over dinner he handed me his passport.

“I want you to know who I really am,” he confided.

I’d heard of the wealthy Rothschild family. Alexander explained he was the illegitimate son of Edmond de Rothschild – who wouldn’t acknowledge him.

I felt sorry for him. But no alarm bells rang as he tenderly kissed me. I’d fallen for him.

Our first night together the next month, at the Cheltenham Park Hotel, was romantic. But – untangling himself from me – he abruptly left before midnight, to “deal with US business.” I got used to him leaving or changing plans.

The love bombing continued. Alexander met my children and my parents, I met his family, he’d cook dinner, and we’d snuggle on the sofa.

During our three-and-a-half-year relationship, we never actually lived together – but I trusted him, despite the fact he lived with an attractive ‘lodger’ Tracey and her teenage daughter Rosie in Stroud. He claimed he was being supportive after her marriage failed. Later, I discovered Tracey was his lover.

“I’m going to spend the rest of my life with you,” he’d reassure, bringing me Chanel perfume.

He told me our future was in Switzerland, where his money was tied up.

When he asked me for £70,000 to pay for college fees, a car and some new computer equipment, I was hesitant. But he wore me down.

He knew I only had £150,000 in the bank left from my divorce after buying my new house in the Cotswolds. But he had other ideas like, taking out a mortgage on the house or borrowing from a friend.

I asked a generous rich friend for a £75,000 loan – I’d pay her back once I sold the new house and moved to Switzerland.

By December he owed me nearly £80,000 but still bought expensive Christmas presents – Tiffany earrings and a Cartier lighter.

He wanted a baby. At nearly 40, I didn’t. But I was in love, and fell pregnant the one time we had unprotected sex.

Whenever he needed bills paying, I withdrew money. He then persuaded me to sell the house and rent in Stroud, near his mum, so she could help with the baby.

When our son Marcus Alexander Nathaniel de Rothschild arrived in 2005, I was overjoyed, yet all the nappy-changing fell to me.

Alexander demanded more cash. After selling my home and then repaying my friend, and other expenses, I had just under £400,000, but that didn’t stay in my account for long. Alexander encouraged me to invest, saying I’d have my own income this way.

This is what’s so clever about serial fraudsters – they seize on your insecurities.

I began to get sick of all his false promises and we’d row. Then he’d declare his love and use emotional blackmail.

Keep up-to-date with all the very latest celebrity, health, beauty, parenting and entertainment news with the OK! app

Only select news that interests you by picking the topics you want to display on the app's homepage.

Go behind the scenes on your favourite OK! shoots, take a look inside your favourite star's homes and be introduced to their new babies before anyone else!

Whenever I asked to see statements, Alexander insisted they were in a safety deposit box in Geneva.

Weirdly, I had an awkward phone call from my sister Di, asking if my money was safe. Apparently Dad had received a message from a spiritualist telling him someone in the family was having money stolen! I laughed it off.

Only after meeting Alexander’s sister-in-law, Anna, in the summer of 2006 did the penny drop. “If he’s a de Rothschild, I’m Mickey Mouse,” she said.

Alexander insisted Anna was lying. I wanted to believe him – but I was down to the last few thousand. I drove to Alexander’s house for answers.

Later he apologised, then said, “It’s a good idea if you stop renting and go and live with Clive [my ex] for a while.” I was the mother of his child! I was being unceremoniously dumped.

Over the next few months I discovered the truth.

‘Alexander’ was actually unemployed Marc Hatton, 49, an experienced conman with a criminal record. During our relationship he’d deceived several other women and successful businessmen.

In February 2010 I finally saw him in court. He received three years for fraud. But there was another shock in store – Hatton also received a 15-year sentence for the rape of a minor. In total he was sentenced to 18 years.

He was eventually released on licence in February 2021 – which spurred me to write my book. It was painful, but I wanted to warn others about him. A leopard doesn't change its spots.

I changed Marcus’ surname to my maiden name. He’s now 17. He gave me a big hug this week and said ‘Mum, I am so proud of you’. My older children are also really supportive.

Hatton is living in the UK, but I refuse to worry about him. I still have no money and use food banks. When I appeared on ITV’s Lorraine I had to borrow the fare to London. But I have to laugh now, it’s too dark otherwise – and I’m stronger than I thought.'

Seduced by a Sociopath by Chrissy Handy (HarperCollins, £8.99), is on sale now