Home » Lifestyle » I was sent a pair of SOCKS by E.ON to keep warm as energy bills double… I could not believe the bare faced cheek of it

A SHOP worker has slammed her energy supplier after receiving a pair of socks to help her use less fuel while families are living in fear of soaring costs.

Barbara Crossman, 65, from Seaton Carew in County Durham said it was a "cheek" she received the pair of polyester socks in the mail from E.ON with a message attached that read “Heating down, CO2 down”. 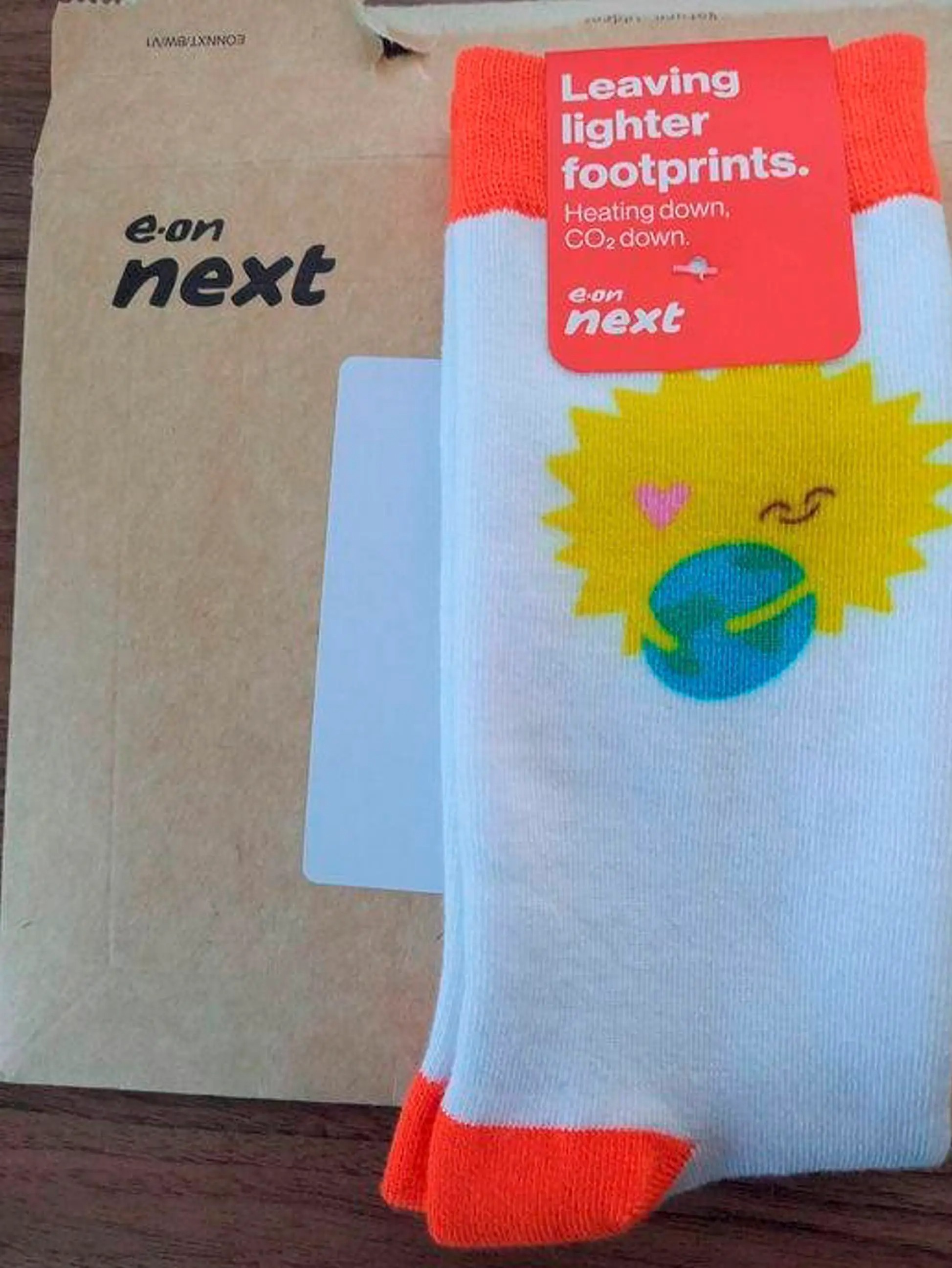 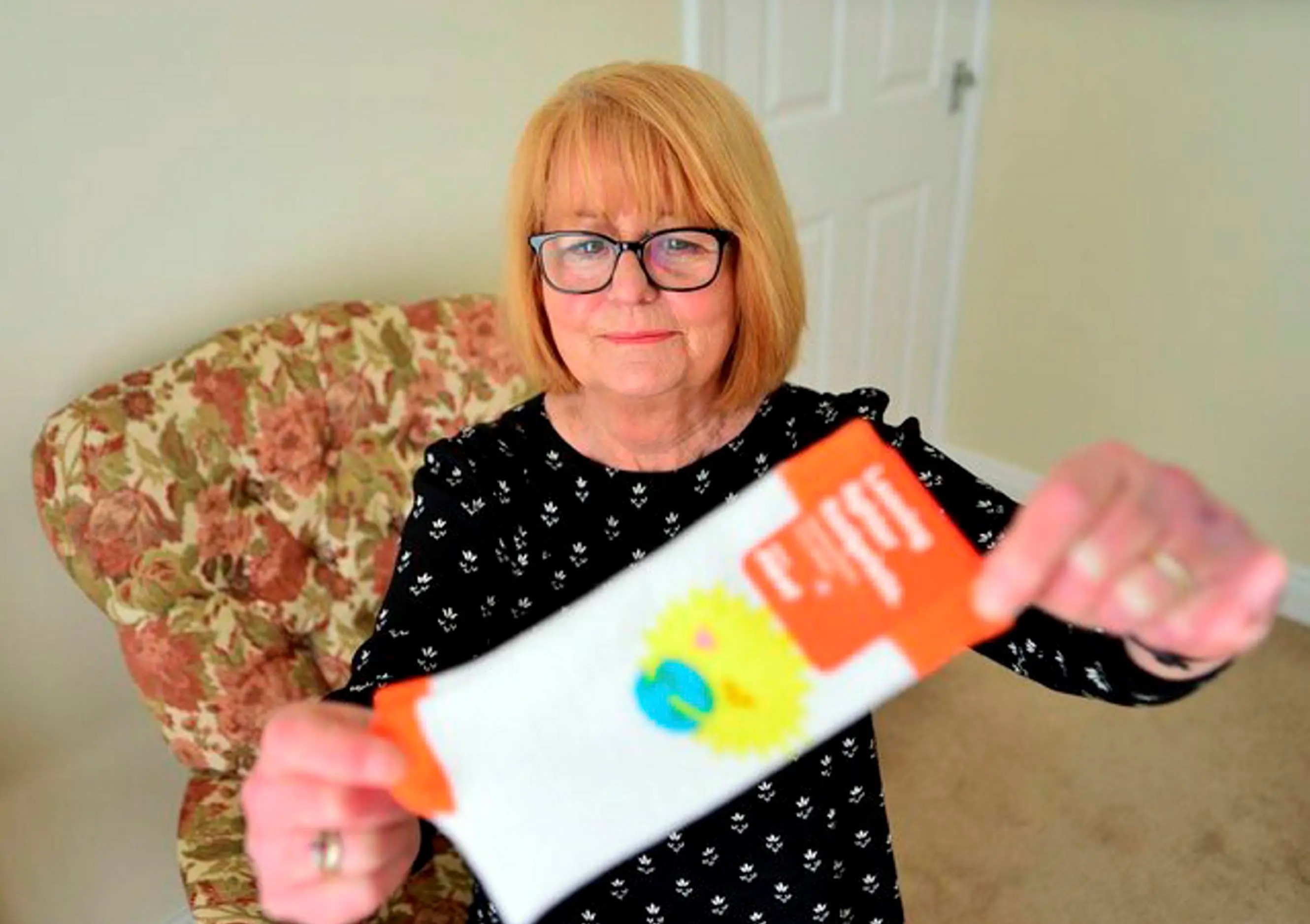 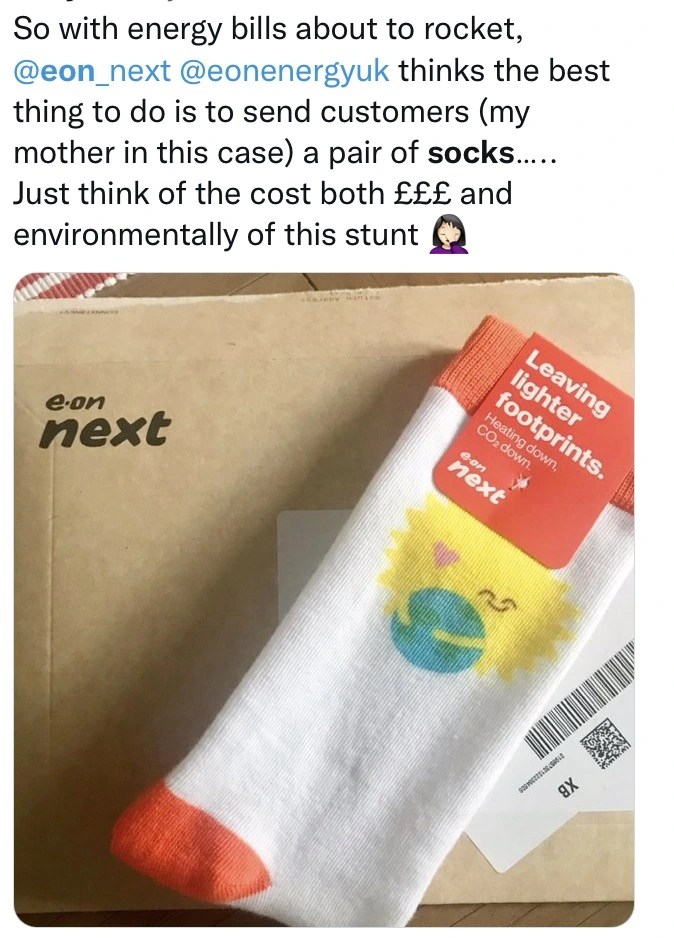 She criticised the energy company for the thoughtless gaffe at a time when bills are going up and major price rises are due to be announced soon.

The firm has since apologised.

Barbara said: "I’ve had a problem with my smart meter and thought it might be a part for it. When I opened it, it was the socks.

“They’re a joke. Considering the time we are in with heating going up I thought it was a bit of a cheek.

"I’m dreading it when they readjust my standing order.”

E.ON reportedly sent a free pair of the socks to 30,000 customers who had engaged with one of its energy saving campaigns last year.

The gifts were to encourage them to continue to save energy although company has since apologised.

Barbara, who works at a jewellery shop in Hartlepool, and is a coordinator of the Hartlepool WASPI pension campaign group, said her bills have gone up by about £10 a month.

She added: “Apparently it was part of another promotion and there is an apology but it still doesn’t help.

"I know it’s a global thing with prices going up but it’s money that is just being wasted.

“It’s our money that we’re paying our fuel with and they spend it on socks.”

Are you having a laugh? Putting energy prices up then take the p**s by sending a pair of socks.

Apologising to customers E.ON said: “If you recently received a pair of socks from us, we would like to say we are incredibly sorry for how we have made some people feel.

“In light of the seriousness of current challenges that many people are facing, this mailing should have been stopped and we are sorry.”

Barbara is one of the 30,000 customers who received the socks after they showed an interest in saving energy.

Some were left fuming over the promotion, saying the supplier was "having a laugh" and "taking the p**s". 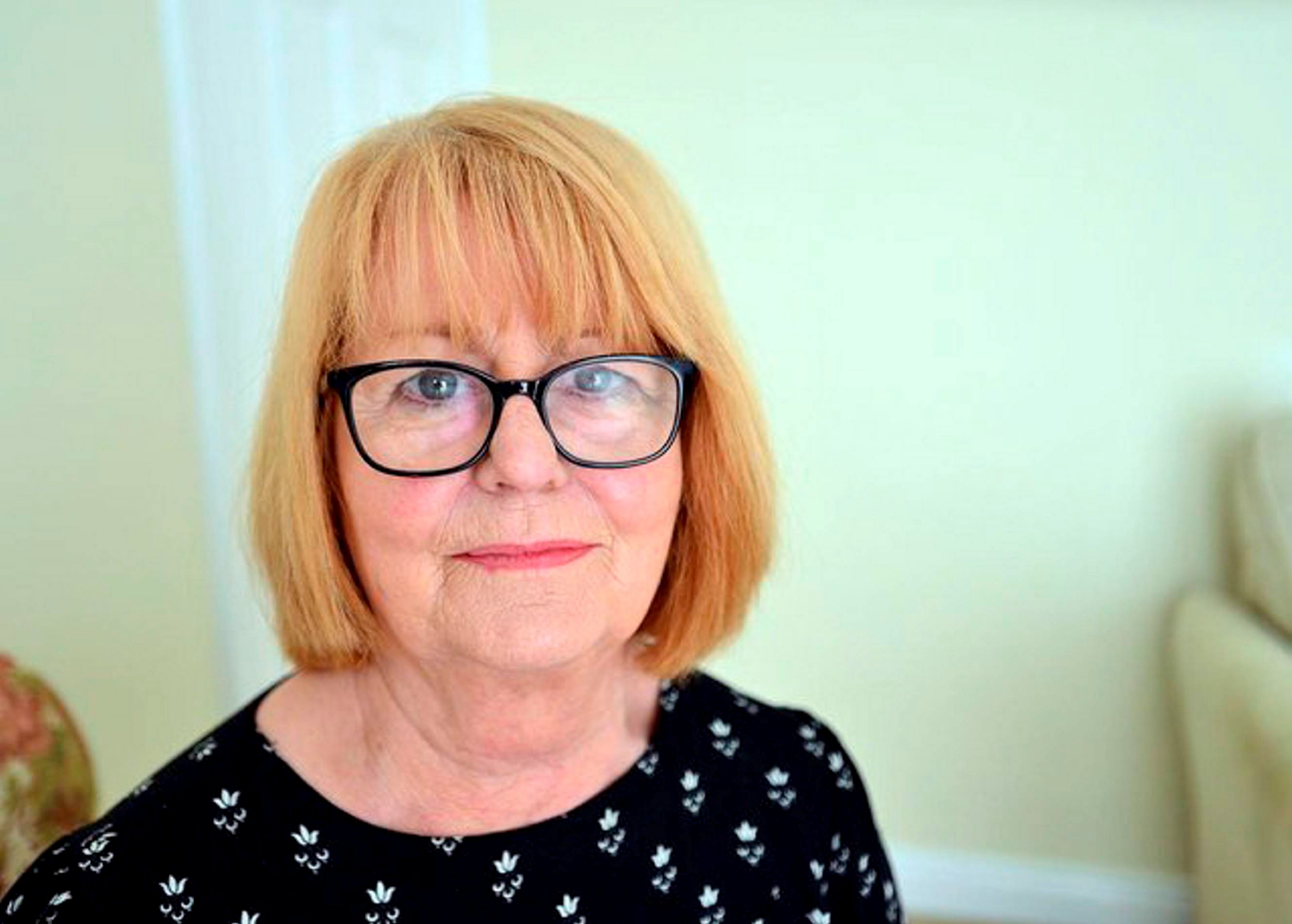 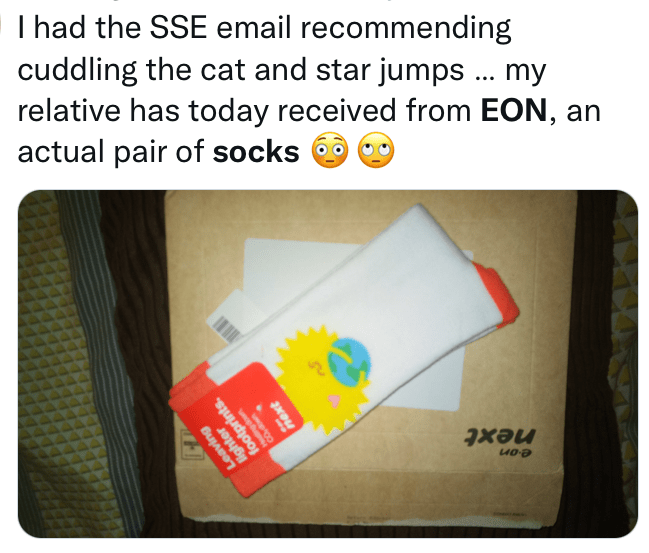 One angry E.ON customer tweeted: "Seriously, energy prices are going up, Look what E.ON Next (as they've renamed themselves) have sent me, a pair of socks!! What the bloody hell".

Another said: "Are you having a laugh? Putting energy prices up then take the p**s by sending a pair of socks. Is that meant to make up for not being able to heat flat."

A spokesperson for E.ON responded to the uproar last week, saying: “This activity was in no way designed to detract from the seriousness of the current energy crisis and the work we are doing to lessen its impact on our customers and we’re incredibly sorry for how we have made some of our customers feel. "

Another energy firm Ovo also apologised to customers recently after sending an email containing advice on how to keep warm including putting on a jumper, eating lentils or ginger and cuddling up to pets.

Another suggestion was to “get moving” by cleaning your house and challenging "the kids to a Hula-Hoop contest".

The email was sent to customers of SSE Energy Services – an electricity and gas business bought out by OVO.

Experts expect that the price of energy will soar by more than 50 percent to around £2,000 for the average household when regulator Ofgem announces its new price cap next month. 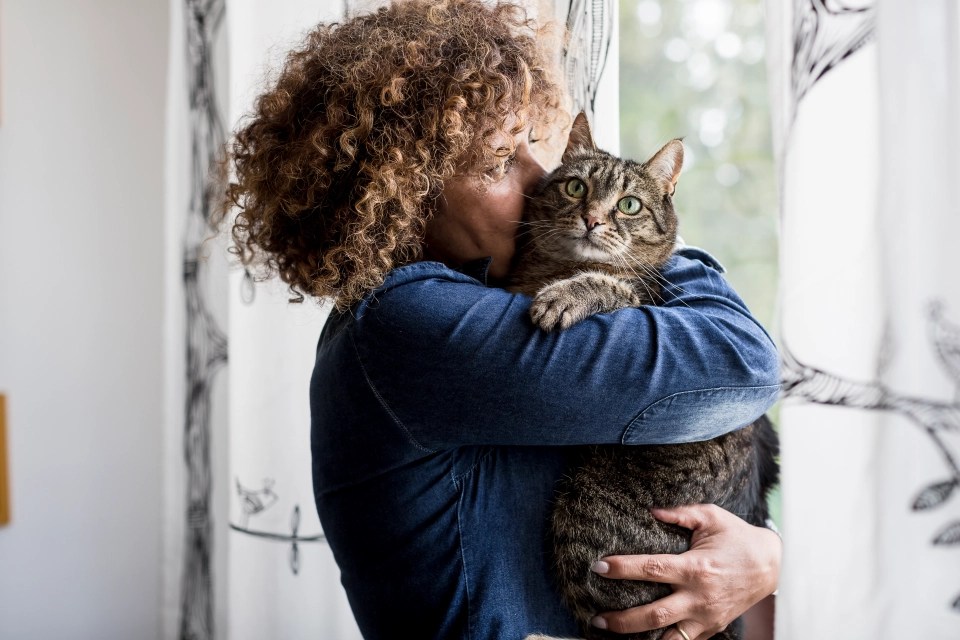 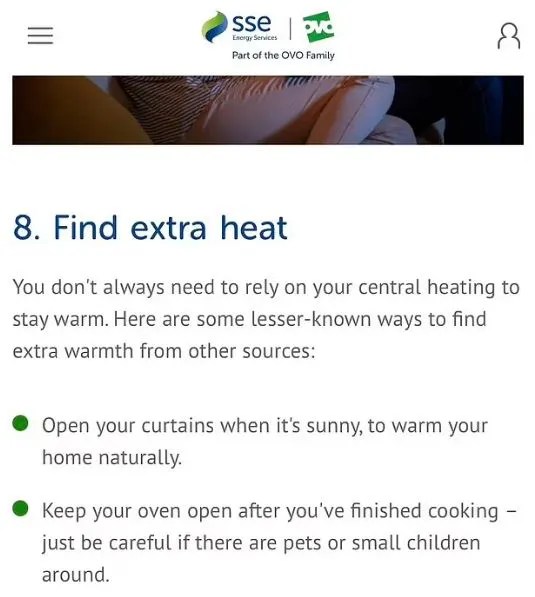