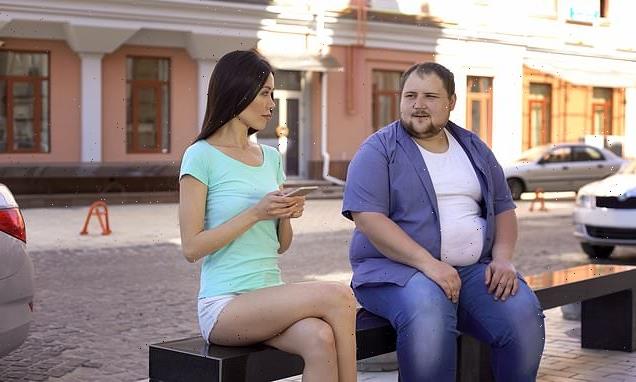 I will divorce my husband if he gains more weight – people say I’m ‘mean’, but I can’t stay with someone who’s morbidly obese

A woman has sparked a debate after she revealed she wants to tell her husband she will ‘divorce him if he gains more weight’.

The unnamed woman, believed to be British, took to parenting forum Mumsnet, writing that she fears he will become ‘morbidly overweight’ like her father-in-law.

She added that her husband is ‘quickly heading to that direction’ because he gorges on fast food every day, even though she cooks him healthy meals.

However, some people argued that it sounds like she is the one with ‘issues’ around food, after she admitted she will ‘only eat in the evenings if there’s a special occasion.’

Her comments mirrored another recent Mumsnet debate where a woman admitted she ‘judges’ parents of overweight children. 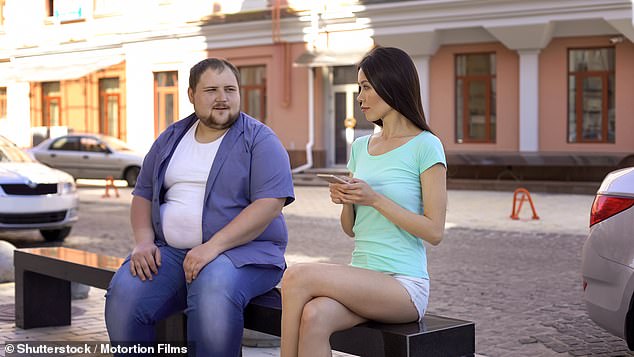 The woman explained: ‘My father-in-law is morbidly overweight, struggles to walk, etc and I have nothing against him but dread the thought of my husband being like that. I’m sorry but I couldn’t stay, I want to be active and do things and to be doing that to your own body…

‘He’s quickly heading to that direction though. Him and I never share a meal, he doesn’t eat the healthy food I cook. He would just order a takeaway instead.

‘He says he loves my cooking but can’t see him eating it?? I batch cook things so there’s always healthy food in the freezer but he won’t eat it.

‘I eat my dinner earlier as I don’t want to put on weight, I will only eat in the evenings if there’s a special occasion. 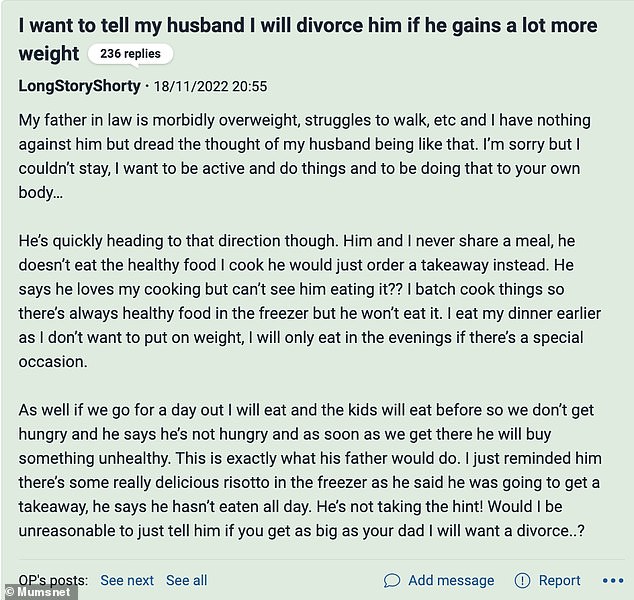 The unnamed woman, believed to be British, took to the parenting forum, writing that she fears he will become ‘morbidly overweight’ like her father-in-law

She continued: ‘As well, if we go for a day out I will eat and the kids will eat before so we don’t get hungry. He says he’s not hungry and as soon as we get there he will buy something unhealthy.

‘This is exactly what his father would do. I just reminded him there’s some really delicious risotto in the freezer as he said he was going to get a takeaway, he says he hasn’t eaten all day.

‘He’s not taking the hint! Would I be unreasonable to just tell him if you get as big as your dad I will want a divorce..?’

Some people accused the woman of having her own ‘issues’ with food. 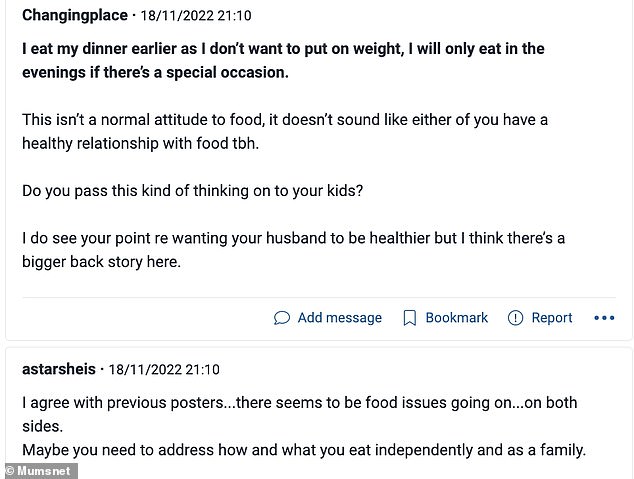 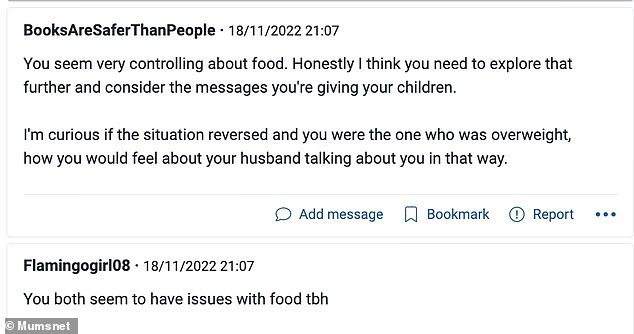 One person wrote: ‘If this is a dealbreaker for you that’s fine, be clear with him. Your own attitude towards food seems disordered and fearful. I would personally worry about what this is teaching your children, and feel there is a balance to be had.’

Another said: ‘You seem very controlling about food. Honestly I think you need to explore that further and consider the messages you’re giving your children.

‘I’m curious if the situation reversed and you were the one who was overweight, how you would feel about your husband talking about you in that way.’

While another wrote: ‘I agree with previous posters…there seems to be food issues going on…on both sides. Maybe you need to address how and what you eat independently and as a family.’

A forth wrote: ‘Your attitude to food sounds a bit dodgy too. You are not being unreasonable to be worried about him going the same way as his father. But it sounds like you never share a meal not only because of him but also because of YOU and this timing thing. 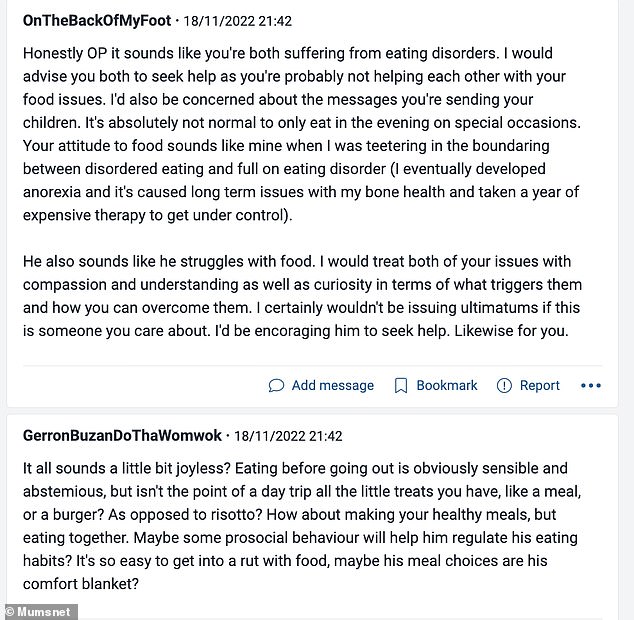 ‘I probably wouldn’t want to reheat risotto out the freezer by myself either. It’s not the same as eating it together freshly made. Meet halfway some days?’

However, others argued that she’s right to take a stand because being ‘morbidly obese is disabling.’

One person said: ‘You don’t have to stay with someone out of kindness. Absolutely, I think you should point this out, sooner rather than later, so can make a decision, before he’s even bugger.’

Another said: ‘Nothing wrong with that. Being morbidly obese is disabling. It’s not your job to look after him.’

While someone else wrote: ‘I can’t disagree with you. I wouldn’t stay either.’

Some others thought the woman sounded quite ‘mean’ and was ‘shaming’ her husband.

One person said: ‘Wouldn’t it be better to say you’re worried about your husbands health as you love him and want him around for your children? They way you’ve written it, sounds very mean.

‘People overeat for many reasons, a lot psychological. Most aren’t purposely trying to disable themselves.

‘Try having some empathy and kindness towards your husband. Maybe one day you will struggle with something. Would you want him to say, “Sort it or I’m leaving you for someone less problematic”.

While someone else wrote: ‘Telling someone they are fat, threatening them with divorce doesn’t work. The person has to decide to want to live a healthy lifestyle and lose weight. It doesn’t come from other people or shaming.’