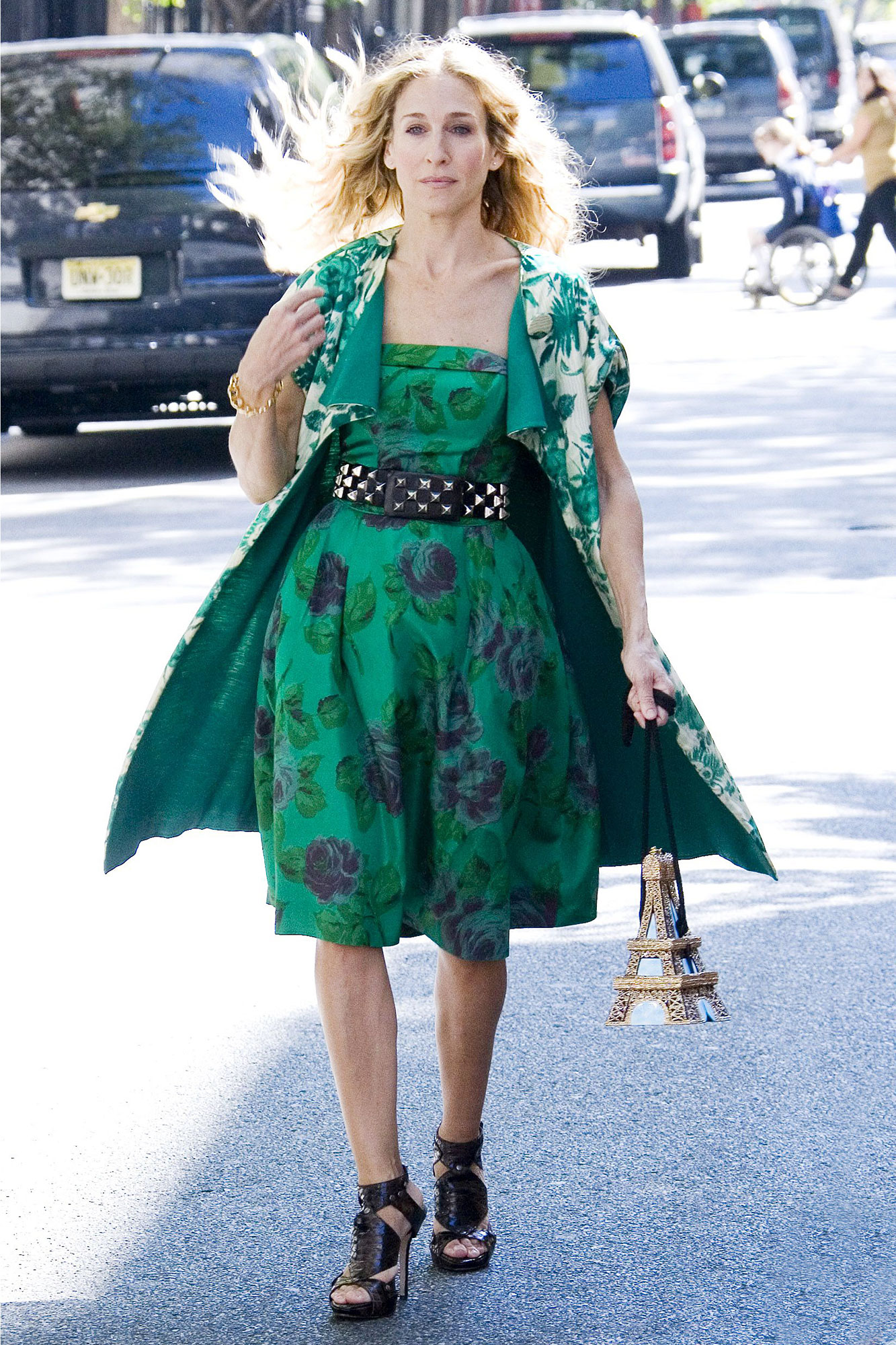 Vintage finds! Sarah Jessica Parker’s fabulous fashion on the Sex and the City revival, And Just Like That, is simply the gift that keeps on giving. Case in point? One of her latest looks is serving up a special significance.

While out and about in New York City in October, the 56-year-old star was spotted wearing a floral-print caftan dress and pair of Dior python leather shoes that should look a tad familiar.

The sleek sandals, which retail for $825, were first seen on the star in the 2008 Sex and the City movie. Any one recall the iconic green floral-print dress ensemble, which she paired with the studded belt and Timmy Woods Eiffel Tower bag?!

Even though the dress has yet to reappear in the reboot (that we know of!), the studded belt and the bag have already been repurposed. Parker carried the purse while filming scenes in Paris earlier this month. In July, she was spotted rocking the Streets Ahead belt with a Carolina Herrera dress and, you guessed it, Manolo Blahnik pumps.

Bringing back items from the original series seems to be a trend embraced by costume designer Molly Rogers. Because while there’s certainly loads of new, soon-to-be iconic items on set, she hasn’t shied away from incorporating a blast from the past.

Be it Carrie Bradshaw’s purple Fendi baguette bag or a special pair of snakeskin shoes, she’s certainly giving devout fans their fashion fix. After all, there are few fictional character’s with as iconic of a wardrobe.

In the initial show, the stellar style was all thanks to costume designer Patricia Fields, who is currently working on Emily in Paris. Fields made it a point to push boundaries and “take it all to another level.” “Her [Parker’s] style was the most similar to my own,” the designer said in story for InStyle. “She was eclectic and could handle pretty much any look I threw at her.”

Carrie in Paris! ‘SATC’ Returns to France While Filming ‘And Just Like That’

Fields went on to detail that while the “freedom” she was given with the closet was unmatched, she did have to fight a good fight to secure the ever-iconic tutu in the opening credits.

“[The show’s creator] Darren Star and I were trying to decide what Carrie should wear in the show’s opening credits. And right around that time, I found what is now known as the world-famous tutu in a little sale basket on a showroom floor,” she recalled. “I knew Sarah Jessica would love it, especially because she’s ballet-trained, but if you’re not in fashion, it’s a little hard to understand the appeal of a tutu. So I had to do some convincing.”

Her argument? “If this show is a hit and she wear this in the credits, it will never, ever get stale,” she told Star. It’s safe to say it was the right call, as the tutu is hands-down  the most memorable look from the show!