Home » Lifestyle » In a flip on Handmaid’s Tale, women are in charge in this five-star series 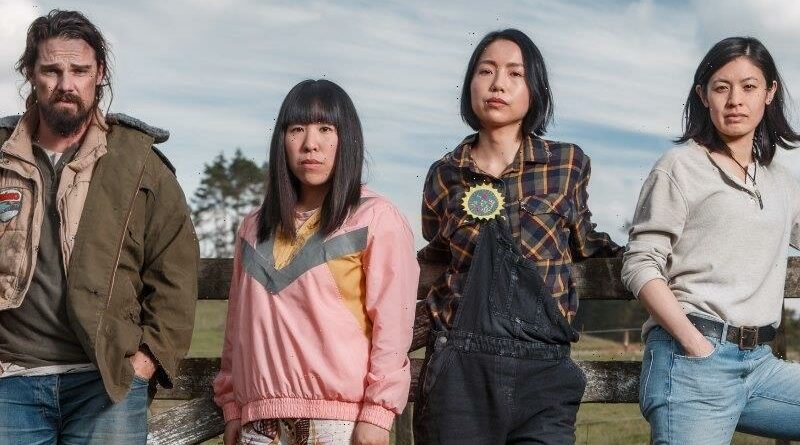 New Zealanders always seem to pull off quirky comedy-dramas and this dystopian series is masterful, with deadpan humour and a terrific cast.

Creamerie opens eight years after an unexplained virus has wiped out the world’s men and boys – we get a brief, gory montage of the virus taking hold in a men’s locker room, swiftly followed by huge pyres of men’s bodies – and New Zealand is now run by women. But life in the fictional Hiro Valley is not the feminist Utopia it appears to be. In a flip on The Handmaid’s Tale, women are in charge, but things have still deteriorated into a fascist state, albeit one predicated on “⁣wellness”, and run by the charismatic, guru-like Lane (Tandi Wright). 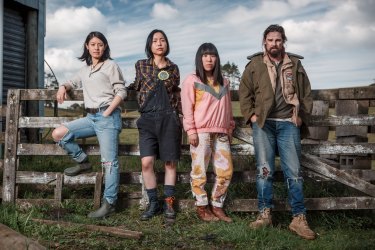 In the opening episode Lane, at a gathering to celebrate Day 2920 (since the virus) reminds a crowd that their man-free society has resulted in free education and healthcare for all and mandatory menstruation leave.

And thanks to sperm banks, re-population continues (only female babies have a chance of a live birth), and women are allotted a precious vial through a lottery system.

The series is created by Roseanne Liang, Ally Xue, JJ Fong and Perlina Lau, whose Flat 3 Productions has already made popular web series in New Zealand. They wrote the three Kiwi-Asian lead characters for themselves after years of being offered roles as sex workers or “dragon ladies”.

Xue, Fong and Lau are Alex, Jamie and Pip, who live together on an organic dairy farm.

Pip works in the wellness centre, and is the least cynical of the trio, wanting to believe the Gwyneth Paltrow-like wellness ethos, reminding Jamie and Alex that using the word “guys” is triggering and that it’s now “goddess”, when cursing.

Alex, arrested in the first episode for throwing a spinach and flaxseed smoothie at Lane and subsequently “blissed” though some kind of mini-lobotomy-like injection in the back of the neck, is the group’s cynic, while Jamie, who lost her husband and young son to the virus, is not far behind her, although she’s thrilled when she is chosen in the repopulation lottery.

But when Pip accidentally runs over someone in her car, everything changes: the victim is a man. Possibly the last man left alive.

After being hidden in their barn (and his sperm extracted for the their personal use), Bobby (former Neighbours star Jay Ryan) reveals that he’s not the only survivor, and that the remaining men are routinely hunted by a woman known as the Bounty Hunter.

The four set out to find the other male survivors, but Lane and her wellness adherents are not far behind them.

Pacy and economical, Creamerie balances out-there sci-fi drama with pitch-black gags; some of the best lines are the offhand references to wellness or background sight gags.

When Jamie, Alex and Pip try to escape the farm with Bobby, they accidentally end up at a menstruation festival, where they’re forced to hide Bobby inside a moon cup costume; the ferris wheel is known as a menstrual cycle and Pip is forced to hand out showbags to young women with the words, “there’s an ‘us’ in every uterus” and “your bleeding is a blessing”.

By the final, sixth episode – a proper cliffhanger; I do hope there’s a second season – the cult of wellness is revealed to be even more sinister than its smoothies and self-care mantras appear, the drama both high-stakes and hilarious.

Creamerie is on SBS On Demand.

Find out the next TV shows, streaming series and movies to add to your must-sees. Sign up to get it every Thursday