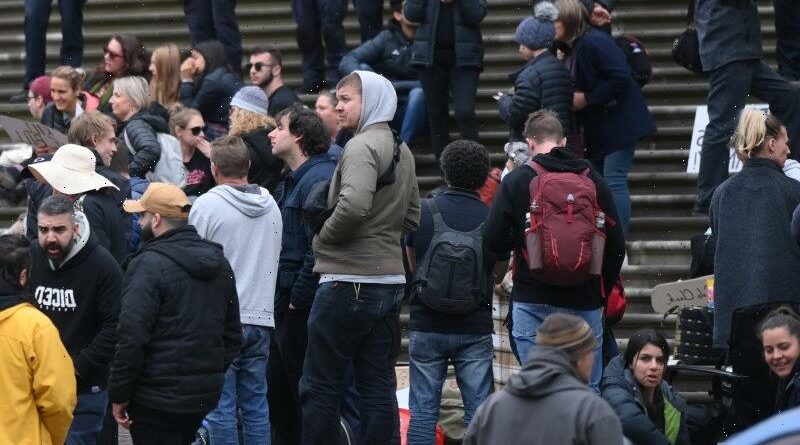 It’s a little known fact that the majority of bills debated in Australian parliaments fly through with the support of the opposition. It’s the rest, the controversial ones, that make headlines.

Given the ugly scenes on Spring Street this week, it might be difficult to imagine, but Parliament is often a boring place where deals are struck and agreement is sought away from the theatre inside the chamber. 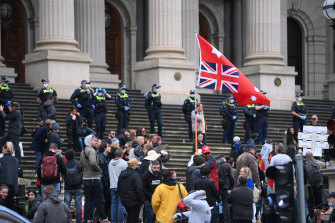 Protesters demonstrating against the government’s pandemic bill outside state parliament this week.Credit:Eddie Jim

Politicians don’t always want you to know this because such solidarity is hardly going to inspire voters on election day.

From the outside politics is played like a sport. With politicians pitting complex legislative issues as having a right and wrong answer and mobilising supporters to join their side.

Such has been the case with the Andrews government’s Public Health and Wellbeing Amendment (pandemic management) Bill 2021 – aka the pandemic laws.

Labor has attempted to garner high levels of public support for its bill by explaining the problem the bill seeks to fix. That is, shifting the responsibility to declare a pandemic from unelected health officials to the Premier. 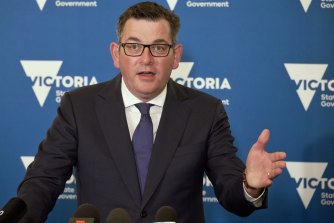 The bill will shift responsibility for declaring a pandemic from an unelected health official to the Premier.Credit:Luis Enrique Ascui

Few, including the opposition, support the current situation where the chief health officer has extraordinary powers to restrict the movement of Victorians and close borders the moment a state of emergency has been declared.

Finding an alternative model shouldn't have been controversial.

It also underestimated the decline in public trust and found itself up against an opposition in desperate search of political capital. 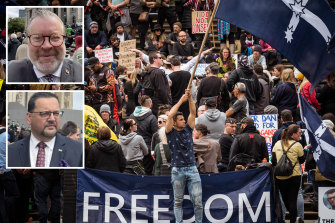 The proposed bill has its merits. It not only puts the powers to lockdown Victorian in the hands of an elected official, but will force the government to release any health orders used to justify restrictions.

But excessive fines of up to $21,800 for people and $109,000 for businesses that don't comply, rightly angered a vast number of Victorians, including the Law Institute of Victoria which described the penalties as extraordinarily high and excessive.

While the fines have ultimately been reduced, the government appeared to do so under duress. It has also failed to fix other concerns raised by legal bodies and the state’s ombudsman including the need of more review mechanisms and better privacy protections.

Which takes us to the government’s second mistake. Process.

Early in the week the government offered up a few amendments which were designed to win the support of three progressive crossbenchers, not necessarily improving the bill.

Instead of bringing the public with it, the government has focussed on the threat the state faces if it is unable to pass the legislation before the expiry of the State of Emergency powers on December 15.

"We are all about making sure that come the 16th of December if someone turns up here from another country and has the virus, let alone people who might have the virus, we have the power to make sure that they go into hotel quarantine," Mr Andrews said on Thursday morning.

Which begs the question, why is such significant legislation being rushed?

It was six months ago that we first learned the Andrews government was secretly negotiating with Reason Party MP Fiona Patten, Animal Justice Party MP Andy Meddick and the Greens’ Samantha Ratnam – who have a long history of providing support for government Bills – to replace its broken state of emergency powers.

In doing so, it alienated other crossbenchers who report that they were sidelined from the debate.

But the truth is, the voters never get it wrong. These MPs have the same right to take a seat in Parliament as the members of the major parties. And the best legislation is often achieved when governments engage in meaningful debate with as many voices as possible.

On this metric, the government has failed.

However, the opposition, meanwhile, has hardly covered itself in glory.

Since taking over as opposition leader in September, Liberal leader Matthew Guy has repeatedly claimed the legislation was a power grab by the government, describing the proposed laws as “an incredible attack on democracy”

While many of the bill’s opponents have engaged in civil and sensible debate, the ugly scenes outside Parliament must be condemned. Yet several government MPs risked looking like opportunistic desperadoes searching for political capital by joining some of the more extreme critics of the pandemic laws on the steps of Parliament this week.

To be elected in 2022, the Liberal Party needs to improve on its 2018 result when it struggled to convince three in 10 Victorians to give it their first preference vote. Flirting with the fringes, as some opposition MPs have done, will not appeal to mainstream Victorians.