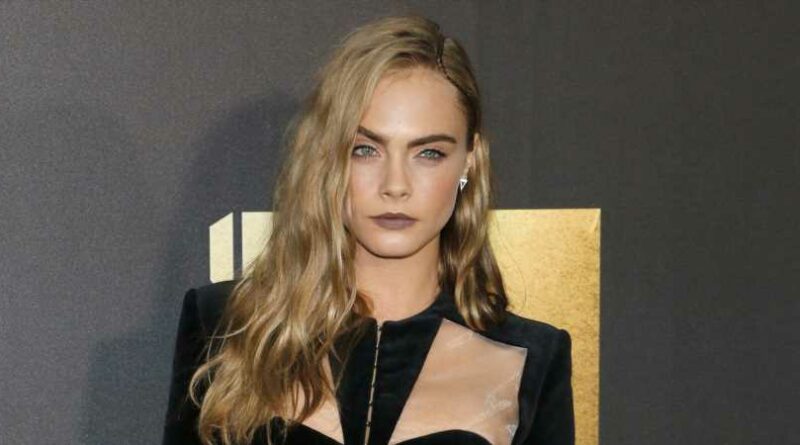 In 2012, Delevingne skyrocketed to stardom, walking in New York Fashion Week, London Fashion Week, and Paris Fashion Week. She’s a musician, an author, and has a net worth of $28 million, according to Celebrity Net Worth.

Behind the smoky eye and fashionable clothes, Delevingne is known by friends and family to have a great sense of humor and a fun personal fashion, particularly in her Los Angeles home.

Built in 1941, the country-style home is said to host Pope John Paul II in 1987, according to CNN, and features beautiful greenery and landscaping surrounding the home with Delevingne’s 1966 Ford Shelby Mustang GT350-H sitting in the driveway.

A large pool in the backyard is surrounded by several Chaise lounge chairs, umbrellas for shade, and a blue and white striped cabana. There are two in-ground trampolines outside, but overall, the outdoor landscape is downright deceiving compared to the inside of what Delevingne describes as something out of Alice in Wonderland.

When Delevingne purchased the property, it came partially furnished. The previous owners appreciated a dark, gothic style, and the model was able to work with many of those items to create her own look. She painted, added some new upholstery, and added a few things to the existing décor. For example, Delevingne said the large, crystal chandelier in the living room didn’t satisfy her creative palette, so they added a disco ball with colored lights, and things began to feel like home.

As guests walk inside, the complete tour leads you through rooms full of Delevingne’s various themes, moods, and creative expression. Designed by architect Nicolo Bini of Line Architecture, guests can immediately pick up on the nature focus – Gucci heron wallpaper, snake carpet, bird sculptures, and tons of houseplants, according to Bazaar.

Themes begin to emerge, lending toward Delevingne’s love of games and fun. A poker room draped in red velvet gives the vibe of stepping into a Las Vegas casino. Another room is full of costumes, including a wall filled entirely with hats, for dressing up at parties, celebrating holidays, and fun evening get-togethers. Delevingne also has a large game collection, ranging from Cards Against Humanity to all the supplies for beer pong.

An Array Of Luxury Amenities

Some of the more common things visitors see in a millionaire’s mansion are also included for Delevingne’s comfort. The upper level of the house includes a billiard room with a vintage pool table and snake-skinned carpet, a movie theater, and a jungle-themed bar, according to Too Fab.

One room holds her most cherished collectible items, such as signed guitars by legend David Bowie and one given to her by the late Karl Lagerfeld. Customized items like a David Bowie memorial bathroom, Chanel-monogrammed surfboard, a clear piano, and a Playboy pinball machine are spotted throughout the house.

The master bedroom includes a mirrored bed with a purple velvet comforter and matching seating, an outdoor sitting area on the veranda, a steam shower, and a closet solely for her large shoe collection.

A music room features cowhide carpet as wall covering and filled with top-of-the-line instruments when Delevingne is in the mood to jam. After all, she has recorded music with the likes of Will Heard and Pharrell Williams, even recording the song I Feel Everything for the film she starred in, Valerian and the City of a Thousand Planets.

Don’t Miss Stops Along the Way

If you’ve heard anything about Delevingne’s home in the past, what probably stuck out in your mind is her custom ball pit room. That’s right, an entire room filled with the lightweight plastic balls we jumped in at Chuck E. Cheese when we were kids – Delevingne has the pleasure of falling into any time she’s feeling stressed. “If I’m having a bad day, I just hop in the ball pit. You can’t really cry in a ball pit,” Delevingne told The Rebel Heart.

She’s proud of the secret passageway in the home, which Delevingne calls the ‘vagina tunnel’ because, in order to access the secondary room, you have to crawl through a yonic soft sculpture. Walking up a blue velvet staircase with crawling cheetah formations leads visitors up to the attic party room, where they’re surrounded by a mirrored ceiling, velvet walls, swing seating, ankle and wrist restraints, and a stripper pole.

Despite some of the wild additions to the classic home design, Delevingne says the house is functional. When her parents come over, they can enjoy a typical dining room, living room, and kitchen area. It’s when friends come over, and the star is feeling wild herself, that one can discover some of the deeper recesses of the home and enjoy an out-of-the-norm experience among her personal style.