Their home is filled with ‘A&G’ monograms, his marriage proposal went on for 28 minutes and they can’t stop kissing in public: Inside the gooey world of the oh-so Swoony Clooneys

He is the smoothie Hollywood star and she is the stunning British human rights lawyer. Together George and Amal Clooney make a glamorous pair and my, aren’t they keen to tell us how crazy they are for each other?

The Swoony Clooneys put on quite a show at the American Film Institute awards last week where she revealed she had resigned herself to being a spinster before she found ‘the great love I always hoped existed’. So just how lovestruck are they? 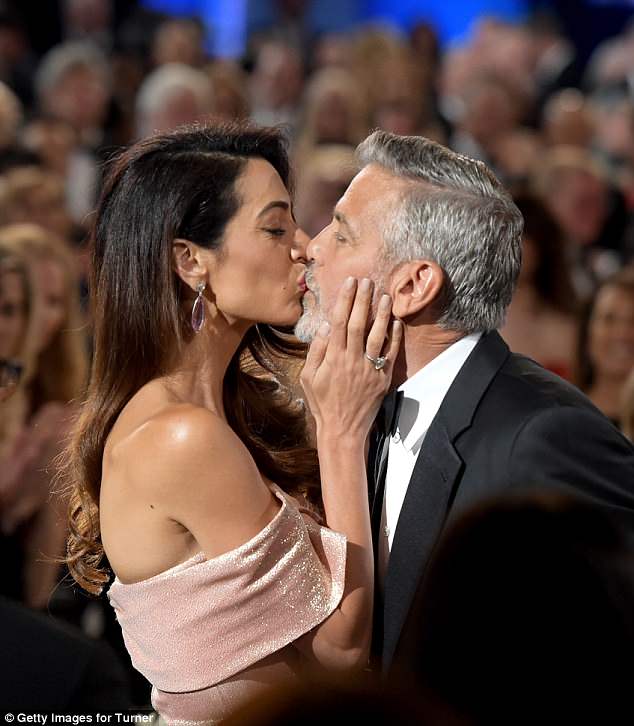 Sealed with a kiss: After they had declared their mutual adoration at the American Film Institute

THE DOGGED ATTEMPTS HE MADE TO WOO HER

Amal, then 35, first met George, then 52, just five years ago when she went with a friend to a party at his house on Lake Como, in Italy, and they stayed in touch.

George said: ‘I knew when I met her that she was super-extraordinary. I wondered if I would ever get a chance to date her. We were friends for a while and luckily she said yes.’

‘Amal is a big emailer,’ Vogue magazine revealed, describing how romance grew, ‘and George responded with a clownish gambit, writing her notes, supposed to be from of his dog Einstein, claiming to be trapped in various places and in need of legal rescue.’ 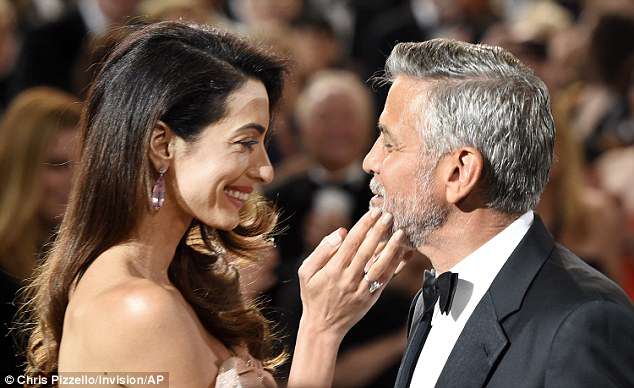 In an interview with the Hollywood Reporter George confirmed the story, saying that the dog, a cocker spaniel, claimed he was being held hostage.

The dog has since died but is immortalised in a painting which sits on their mantelpiece.

He is ‘dressed as a physics professor’ and standing in front of a blackboard.

Their next meeting was at the Abbey Road studios in London — where George was recording a film soundtrack and invited her along. He had hoped the venue would make him seem cool, and was deflated when Amal said she had just been visiting the Muslim Brotherhood while he was trying to impress her with a ‘dumb movie score’.

‘HIS SMILE ALWAYS MAKES ME MELT’

‘I met George when I was 35 and starting to become quite resigned to the idea that I was going to be a spinster.’ Amal told the American Film Institute on Thursday.

‘Then we met and started hiding out in my London flat and very soon it felt like, no matter what happened, I would never want to be with anyone else. He is the person who has my complete admiration and also the person whose smile makes me melt every time. My love, what I have found with you is the great love I always hoped existed and seeing you with our children Ella and Alexander is the greatest joy in my life.’

George is even more complimentary. He told an interviewer: ‘Look, it’s good to surround yourself with anybody who is smarter than you, and for me the bar’s pretty low anyway. But Amal is way up there. She’s brilliant.’

Accepting an award at the 2015 Golden Globes, George oozed: ‘Amal, whatever alchemy it is that brought us together, I couldn’t be more proud to be your husband.’ 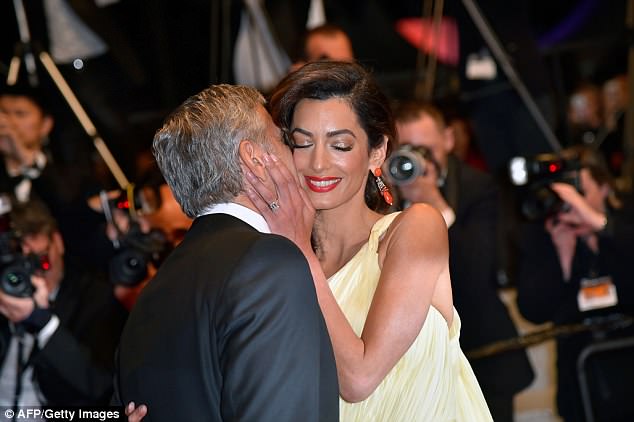 Cheek to cheek: A mooch in Cannes

LOVE OF GIRAFFES SEALED THE DEAL

A visit to Kenya together in February 2014 sealed their love. ‘Amal loves giraffes; they’re her favourite animal,’ said George. ‘She went to this place called Giraffe Manor, where the giraffes stick their heads through the windows and kiss you.’ Back in LA, he showed a photo to his actor friend Ben Weiss.

‘I had a picture of her, looking back, smiling at these giraffes, and I said: ‘I think I’m going to ask her to marry me.’ And Ben said: ‘I think that’s a good idea.’ ‘

For Clooney — previously married to actress Talia Balsam — it was quite a step, having spent decades dating cocktail waitresses, party girls and even a professional wrestler.

He told Vogue: ‘If you know anything about my crazy life, you know that I’d pretty much committed to the idea of never marrying again, but I started dating Amal, and I immediately knew that something was very different.’ 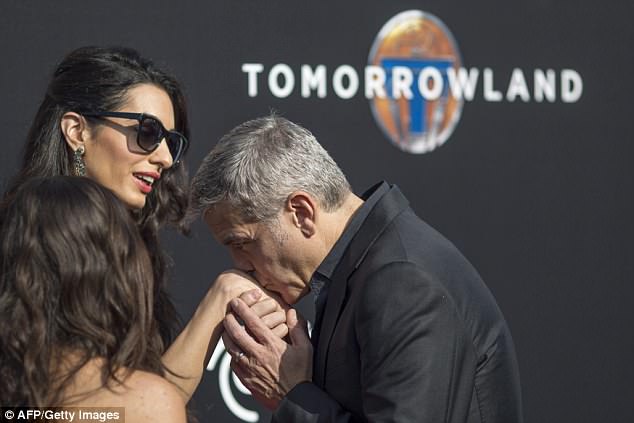 HARD TO GET UP AFTER PROPOSING

One evening in April 2014, George made them both dinner. ‘I did pasta of some form, not that impressive. And then over champagne, after dinner, I told her there was a lighter to light the candle in the drawer, and she reached back and pulled out a ring.

‘And I did all the stuff, got down on my knee and did all the things you’re supposed to do,’ he told CBS News in 2015.

The reaction was not quite what he expected. ‘She’s like: ‘Holy s**t!’ And she just kept staring at the ring, going: ‘Oh, my God.’ It was 20 minutes of me on my knee, waiting for her to say yes, because she was so shocked.’

In another telling, the wait was even longer: ‘She just kept saying: ‘Oh my God,’ and ‘Wow’ — completely unexpected. Finally I said, ‘Listen, I’m 52 and I’ve been on my knee now for about 28 minutes, so I gotta get an answer out of this or I’m going to throw a hip out.

‘I might not be able to stand back up.’ The couple married in Venice in September 2014. 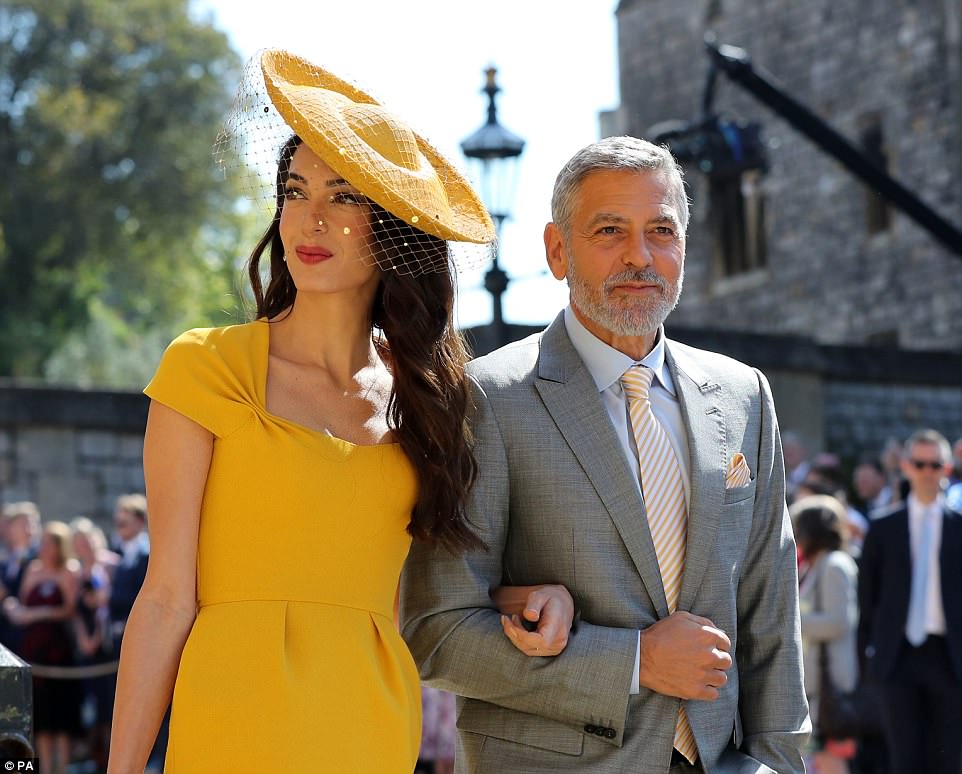 NEXT COMES THEIR OWN COAT OF ARMS

This is a couple who seem to be so keen on their brand that they are working up to getting their own coat of arms.

They have ‘A&G’ monogrammed on everything — from the robes in their pool house to Amal’s hat boxes. Guests at their wedding were sent home with an iPod each, loaded with George’s playlist, and monogrammed with ‘A&G’ as were the napkins at the wedding feast.

And just in case they were in danger of forgetting whose wedding they had attended, they also took home a photograph of the happy couple in a silver frame.

At the wedding, Amal presented George with some cufflinks with the word ‘George’ written on them in Arabic. At their UK home in Sonning, Berkshire, there is a sculpture which features the initials A and G intertwined. 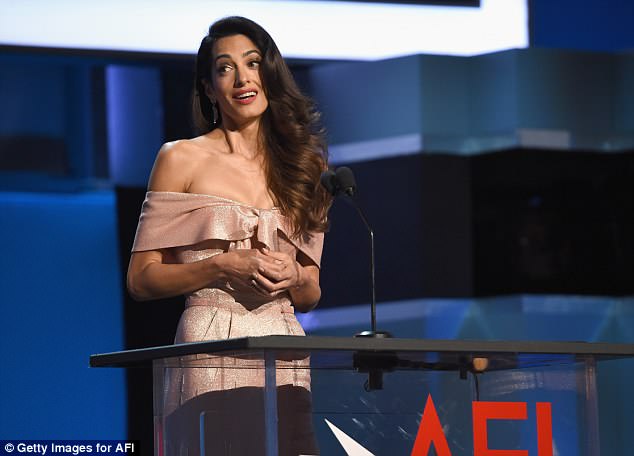 Quality time with their twins Ella and Alexander is spent between 6am and 8am when they join the couple in bed. Amal says that she doesn’t arrange any phone calls until later in the morning so all four of them can be together as a family without any interruption.

There is a team of staff who look after them: a nanny, a chef, an assistant and other household staffers. George calls the twins ‘the knuckleheads’.

Amal said on Thursday night that, having come late to fatherhood, he is a wonderful dad. She said: ‘You fill our home with laughter and that’s even before the children have worked out that ‘Da-da’ is Batman, a talking fox and friends with Mary Poppins. I’m so proud of you, my love.’

HER FASHION IS ‘CRAZY AND FUN’

Amal was quite a clothes horse before she and George were married, but has evolved into a fashion icon and is often seen in terrifyingly expensive couture.

Not everyone is a fan of some of her more out-there choices. Last month she stepped out in New York wearing a pair of £1,500 Alexander Wang trousers, made to look like frayed denim hotpants worn over leather leggings.

Even when riding with George on his motorbike in Los Angeles, she puts on Stella McCartney wedges. George said: ‘It’s amazing, because she’s always, since the day I met her, had this insanely . . . it’s eccentric but it’s fun, sense of fashion.

‘How she does it while she’s got 11 cases she’s working on, and she was teaching at Columbia, and she’s still like: ‘I want to wear that dress.’ It’s crazy.

‘It has been fascinating to watch, because she has such great taste.’ 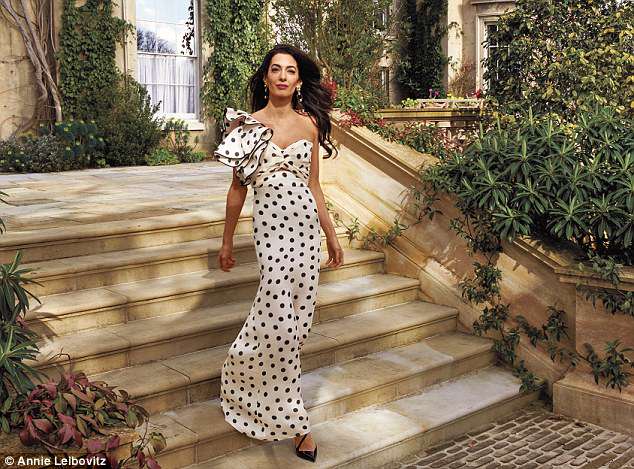 Beauty and brains: Amal revealed George wooed her with emails in the voice of his dog Einstein

A PHOTO BOOTH FOR WILD PARTIES

The couple enjoy the use of four homes — George’s lakeside house in Como, a new apartment in New York, where Amal is a visiting professor at Columbia Law School, his old bachelor pad in Los Angeles, and their large mansion house in Sonning, which sits on the banks of the Thames and boasts a 16-seater cinema, a pool house with a bar and a photo booth for parties.

The booth produces two copies of every image — one goes up on a bulletin board at the house and the other is given to the guest. George said: ‘You can tell the ones that are from 3am, with people in bathrobes. Then there are ones that are just, like, George in a hat.’

AMAL SCREAMS AT HIS RACY EMAILS

In an interview with the Hollywood Reporter, George said he and former President Barack Obama are such good friends that they exchange raunchy text messages.

He said: ‘I have over the years with my friends said a lot of really [outrageous things]. ‘I’ve had an email exchange with Sacha Baron Cohen that’s some of the filthiest stuff, honestly.

‘Amal will be on the chain and she’ll be upstairs and I’ll hear her scream: ‘No!’ because it’s just foul, and you think: ‘Well, that would probably not be great if it came out.’ ‘

Obama has stayed overnight at Sonning, and George says he beat the President at basketball.

‘WE JUST WANT TO HELP PEOPLE’

The couple have founded the Clooney Foundation for Justice.

It delivers aid for the settlement of refugees in the U.S., builds schools where refugees are based and monitors trials around the world where judges may be complicit in human rights abuses. George recently said he was donating $20 million (£14.9m) to it.

And of course Amal is the perfect consort. George said: ‘I don’t think of us as a power couple, because I don’t know what that means.

‘Bill and Hillary [Clinton] seem to be a power couple. I think we’re just a couple with great interest in the human condition. I don’t think of that as particularly powerful; I just think of it as our responsibility as people on the planet.’

He added of Amal: ‘I’m very proud to be around, watching the things that she does I admire so greatly.

‘I’ve always been involved in things other than this business long before I was successful at it, but she’s been doing it kind of quietly and unheralded for a long, long period of time.’