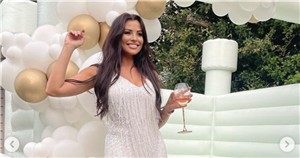 The Only Way Is Essex star Jessica Wright has given a glimpse inside her stunning bridal shower as she was joined by sister-in-law Michelle Keegan.

The 35 year old, who recently jetted to Ibiza with her lookalike sister Natalya, 21, for her hen do, gave a glimpse inside her gorgeous party to her 1.4million Instagram followers.

Jess, who is set to tie the knot to fiancé William Lee-Kemp, 37, in September, looked every inch the glowing bride-to-be in a 1920s-style dress with towering silver heels and a tiara atop her brunette locks.

The former reality star posed with a glass of rosé in hand next to a giant white bouncy castle in her garden that was decked with gold balloons. Jess was joined by her nearest and dearest including mum Carol Wright, sister Natalya and sister-in-law Michelle Keegan who is married to Jess' brother Mark Wright.

The brunette beauty also had a pretty swing in her garden which was covered in pale pink flowers as she posed up a storm with model sister Natalya. Meanwhile the girls were treated to lashings of bubbly as the party got into full swing along with a delicious grazing table adorned with cheeses, fruit and cured meats.

The glamorous guests also enjoyed giant donuts and cupcakes with 'bride' spelled out in the sweet treats.

Captioning the snaps to her Instagram, Jess penned: "Last night was something that dreams are made of feeling so spoilt and happy right now love everyone that made it so special, so much."

It comes as Jess is currently filming her own ITVBe reality show, The Wedding, with fiancé William which will document their upcoming nuptials.

The 90-minute special will chronicle the former TOWIE star and William's build-up to their dream star-studded wedding in Mallorca.

As well as focusing on Jess and William, the ITVBe reality show will see appearances from her mother Carol and father Mark Snr, who also found fame on The Only Way Is Essex, plus other famous guests who will be supporting the couple.

Jess and William had originally planned to marry in June 2021, but due to coronavirus restrictions, the couple had to change the date to September.

Jess Wright: The Wedding is made by Potato and it is the same producers behind other popular ITVBe shows Ferne McCann: First Time Mum, Sam and Billie: The Mummy Diaries and the forthcoming Billie and Greg: The Family Diaries.