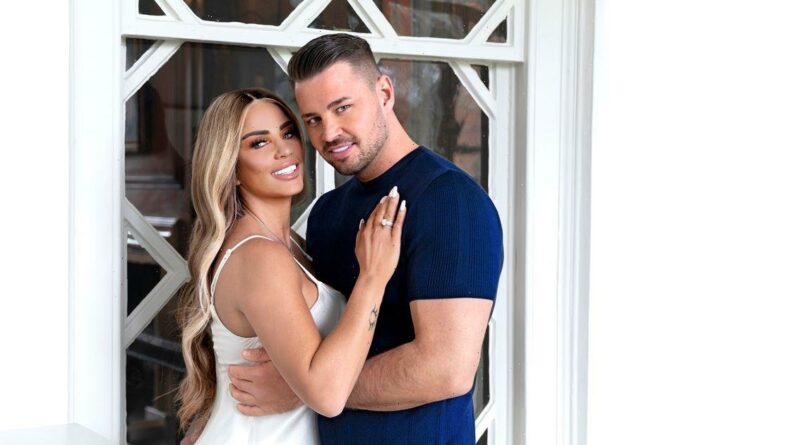 Katie Price has announced her engagement to Love Island beau Carl Woods after a whirlwind romance.

The mum of five shared the happy news exclusively with OK! magazine as she and her new fiancé and flaunted her glittering diamond.

But it is not the first dazzling ring that the former glamour model, 42, has had on her finger.

And eight rings in the stunning collection that Katie has been lucky enough to wear have been valued exclusively for OK! at £470,000 by diamond expert Max Stone from Steven Stone.

Katie confirmed her romance with Carl Woods last year, and shared a couple’s selfie with her new beau.

Speaking of the happy news Katie told OK! Magazine : "It’s refreshing to be with a man that if I decided I never wanted to work again, he’d look after me. I just love him."

The 42-year-old explained that although they have only been together 10 months, his proposal did not come as a shock.

She said: "We’d spoken about it a lot, so I knew he was going to, I just didn’t know when. It was amazing. Carl asked my mum and dad for permission – and Junior!"

He said: “This looks like a five-carat emerald cut, diamond encrusted, wed fit design, meaning rings can fit flush either side.

In diamond terminology, VS clarity means “Very Slightly Included”, and so the diamond features minor irregularities, that range from difficult (VS1) to somewhat easy (VS2) to identify under 10x magnification.

Katie dated Kris on-and-off for more than a year.

The 30-year-old personal trainer proposed to Katie in 2019 and her children, including Harvey, reportedly referred to him as dad.

However, the couple, who featured on reality show My Crazy Life, were not meant to be and separated in August 2019.

Taking a look at her rock, expert Max said a ring in this style could be worth an eye-watering £100,000.

Speaking to OK! Max said: “Interestingly, this looks like a Tiffany design, with the classic six claw prong setting.

“It’s set with micro pave diamonds encrusted on the band. It looks like a 3.5 carat diamond, with a F/G colour and VS clarity. “

The F/G colour means the rock falls on the cusp of the colourless and near colourless diamond grade scale.

Kieran and Katie tied the knot in the Bahamas after meeting just two months prior before welcoming son Jett, seven, and daughter Bunny, six.

The 34-year-old former stripper proposed on Christmas Day in 2013 with an emerald diamond engagement ring.

Diamond expert Max valued the unusual ring at around £10,000, adding: “This does not look like a typical engagement ring as there is no centre stone.

“Instead, it has a five-row cut down setting, with around 2.5 carats of small diamonds. The diamonds are an F/G, colour grade and VS quality.”

However, it was not happily ever after, with Kieran embarking on affairs with two of Katie’s friends.

Argentinian model Leandro proposed to Katie in 2012 and were engaged for six months after meeting at Sir Elton John’s post-Oscar’s party.

Speaking about the ring, Max added: “This hear-shaped ring features either a pink topaz or pink sapphire with cut down halo design with a diamond set band.

“Due to its vivid colour, it could definitely be a pink sapphire which are valued higher.”

However, it is thought the couple split due to language barrier issues as, reportedly, they had to use Google Translate to communicate.

Katie and former cage-fighter Alex Reid, met at Michele Heaton’s 30th birthday and soon after eloped in 2009 before heading to Las Vegas to get married in February 2010.

Alex blames Katie for telling the world about his alter-ego Roxanne saying: “The only reason people know about Roxanne is because she exposed me at her book launch.”

He said: “This huge ring from Alex is a custom cut, micro pave set ring.

“The large centre stone is around 10 carats and looks like a checkerboard morganite due to its pink tones. The stone is surrounded with over 2 carats of small diamonds.”

The nation watched their romance blossom on I’m A Celeb, before they wed in a huge fairy-tale ceremony, covered exclusively by OK! magazine in September 2005.

They went on to have two children together; Princess Tiaamii Crystal Esther Andre and Junior Savvy Andreas Andre.

Peter filed for divorce from Katie in 2009 but the pair co-parent their two children.

Katie reportedly received three engagement rings from the Mysterious Girl hitmaker with the original believed to be set aside for daughter Princess.

In 2019, a source told The Sun Online: “Katie's got three engagement rings from Peter – she wants to keep the first one for Princess but the other two 'upgrades' she's willing to sell.”

Taking a look at the ring Peter proposed with in 2004, Max said: "There is no centre stone in this ring, and instead it has a micro pave set, rectangular design. The band is most likely to be white gold, which is diamond encrusted all around the ring."

Examining the second dazzling rock, Max commented: “This again, is not a typical engagement ring style, and it’s clear the star likes large rings that are heavily encrusted with small diamonds, rather than the focus being on a centre stone.

"This is a pave set custom rainbow style ring, with around two carats of diamonds overall. If it was valued today, it would probably be worth around £60,000."

The third ring upgrade bears a striking resemblance to the one Katie received from Alex Reid with a price tag of around £80,000 today.

Max said: “It contains another pink/brown stone, that could again be morganite. From the unique design, it’s definitely been custom made, and looks like she’s chosen her own stone and asked for it to be surrounded by encrusted diamonds.”