“A lot of kissing and dancing,” One Love Wedding Chapel owner Marty Frierson exclusively told Us Weekly of the Monday, April 4, ceremony in Sin City. “It was very, very romantic.”

Kardashian, 42, and Barker, 46, were in Sin City for the 2022 Grammys on Sunday, April 3. Hours after his performance with H.E.R. and Lenny Kravitz, the couple exchanged vows during a small ceremony, but it’s unclear if they obtained a marriage license.

“It takes 30-40 minutes to complete,” Frierson told Us of the wedding, noting that the pair picked the chapel’s One Love Affair package. “She got married, danced, threw the bouquet and then went off.”

He added that the twosome didn’t waste any time. “The vibe was just love,” he said. “They came in, went right to the chapel and did their ceremony.”

The Poosh founder and the drummer got engaged in October 2021 after one year of dating. “I’m so excited; he was really cute, he did that [proposal] all on his own,” Kris Jenner, who gave Barker permission to propose, told Ellen DeGeneres at the time. “He did, he’s a sweetheart and they’re so happy. They can’t wait. … I think people at the hotel thought they were setting up for The Bachelorette or something. …Kourtney and Travis, they really are made for each other. They’re the cutest couple, they’re so in love and, you know, they let us know they’re so in love. Constantly.” 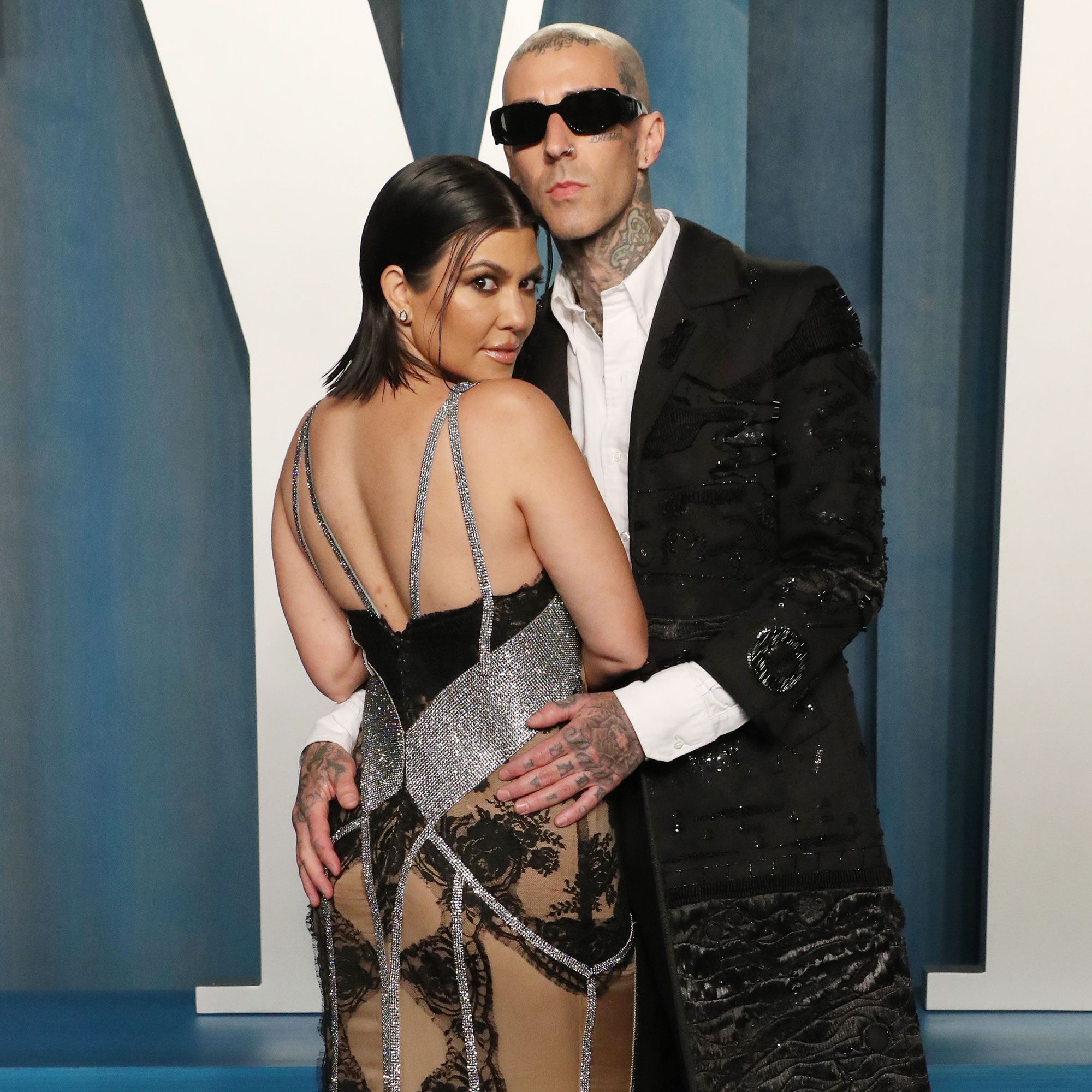 Earlier on Sunday, according to a source, the twosome stopped by the Gala Music After Grammy Party hosted by John Terzian of The h.wood Group and PIXL8 Partners at Delilah at Wynn before their surprise nuptials.

“They were very lovey-dovey,” an insider told Us of their afterparty behavior. “Travis was very nice and protective of Kourtney. … They were inseparable the whole time [and] didn’t leave each other’s side.”

Celebrity Couples Who Got Engaged and Married Within 12 Months

Fans will watch Kardashian and Barker’s proposal play out on season 1 of Hulu’s The Kardashians, which premieres later this month. In the trailer for the season, it was also revealed that the pair hope to have a child together.

“They will have a baby together without any doubt, it’s just a matter of when and how,” a source previously told Us. “Ideally, Kourtney would like a natural birth. She’s confident it won’t be a problem because she’s always been lucky to conceive naturally and has taken great care of herself physically.”

Kardashian, for her part, is the mother of Mason, 12, Penelope, 9, and Reign, 7, with ex-boyfriend Scott Disick. Barker, meanwhile, shares Landon, 18, and Alabama, 16, with ex-wife Shanna Moakler.