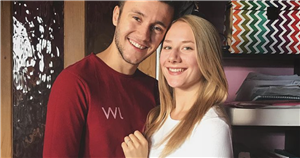 Gregory Piper has made an explosive return to Line of Duty series six.

The 23-year-old actor, who first starred in the hit BBC One series aged 13, has given fans a glimpse into the home where he lives with girlfriend and fellow actress Becca Fuller.

Gregory gave a sneak peek of their living room to his 7,145 Instagram followers while he did touch challenge with a toilet roll during lockdown in March 2020.

We can see that the cosy home features purple walls with oak wooden flooring and built-in bookcases that frame the doorway.

The shelving is decked with pretty fairy lights while stacks of books create a homely feel to the property, which is in the Midlands.

Gregory, who co-owns Drama Workshop with girlfriend Becca, filmed a short clip of a Harry Potter trailer to Instagram and revealed his home in the process. Meanwhile the living area is connected to a bright and airy kitchen, which is painted in a fresh turquoise hue with black-and-white checkerboard floor tiling.

The cream cupboards complement the black tiles while a dining table can been seen in the corner of the room and is perfect for entertaining guests.

We can also see sweet family pictures on the walls of the living area while a huge cork board is filled with snaps.

A small corner desk can be also seen, and is home to a computer and lamp which most likely come in handy with learning those all-important lines.

The home also features cosy wooden beams on the ceiling that could be seen when Gregory shared a heart-warming Christmas snap of himself and Becca sporting festive jumpers.

Gregory has been in a relationship with Becca for five years.

The couple recently celebrated their anniversary and Gregory posted a sweet Instagram, captioned: “Happy anniversary baby!!! 5 whole years! Mad to think how quickly it’s gone! Time flies when you’re in love. You’re my rock to the moon and back girly.”

In June 2020 the couple announced they were owners of Midlands-based Drama Workshop which aims to help young children aged seven and over take their first step into acting.