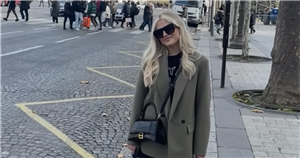 Actress Lucy Fallon has been enjoying her 26th birthday in Paris, thanks to her footballer boyfriend Ryan Ledson.

Ryan, who plays for Preston North End, whisked Lucy away on a romantic trip to the French capital to celebrate her birthday in style.

The loved-up pair went public with their romance back in May, following Lucy's split from long-term partner Tom Leech last year.

Lucy and Ryan have been inseparable ever since, and it was revealed in September she'd moved into the footballer's lavish pad after just four months of dating.

Former Corrie star Lucy, has been sure to document her birthday trip on Instagram, sharing a series of enviable snaps with her 510,000 followers.

She posted a close-up shot of a martini as her birthday celebrations got underway, as she told excitedly told fans she was off to Paris.

Having arrived in the French city, Lucy gave fans a tour of her luxurious hotel suite which featured a huge balcony with a stunning view of the city. She tagged boyfriend Ryan, writing "I can't @ryanledson8" alongside a red love heart emoji.

The star continued to gush over the hotel's view, as she posted a gorgeous snap of the Eiffel Tower lit up during the dark evening, excitedly writing: "Turning 26 and omg x".

Following her first evening in the city, she took to her Instagram stories again to document her and Ryan's first full day in the capital.

The actress shared a picture of herself during a shopping ship, as she stunned in a khaki green blazer and oversized shades, with her long blonde hair in loose waves.

The couple then continued to explore the city, filming footage of The Louvre and enjoying coffee together.

Lucy quit her role as Bethany Platt on Coronation Street in 2019 to pursue other acting projects. She has since appeared in the horror series Sour Hall, with other miniseries and short films due out later this year.

She was rumoured to have been set to sign up to Strictly Come Dancing following the end of her time on the soap, but unfortunately didn't appear on the show.

It was reported that the actress was 'gutted' when she missed out on Strictly again this year, after the show opted to sign up Lucy's former Corrie co-star Katie McGlynn instead.