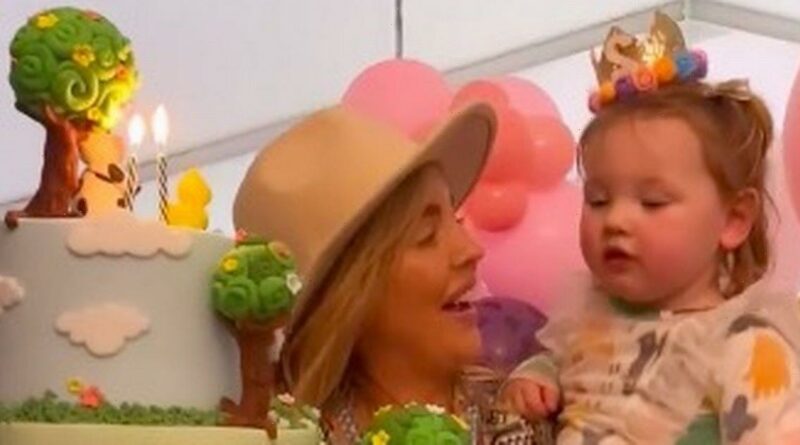 Former The Only Way Is Essex star Lydia, 31, was joined by her family, including mum Debbie and sisters Romana and Georgia, and a string of close pals on Sunday to celebrate Loretta's big day.

Lucy, who is currently pregnant with her second child with beau Ryan Thomas, took to Instagram to document the party, which was held at an indoor play area. She shared a clip taken in the car as she and Roman made their way to the party, with the two year old cuddling a plush toy while sat in his car seat.

Having arrived, she then took to her Instagram Stories to give her a followers a glimpse inside the party, where she was greeted by Debbie and Romana, who fussed over two year old Roman.

Romana could be seen wearing a bright green blazer and matching trousers, while Debbie wore a black maxi dress paired a lick of classic red lipstick. The party soon got underway, and Lucy posted photos of Roman and Loretta playing together, with one shot showing the pair holding hands as they ran towards the play area.

The venue had also been given a makeover, with a gorgeous pink and white balloon display having been installed, alongside a large metallic balloon in the shape of the number two.

The party appeared to be farm-themed, with two large cardboard cutouts of a cartoon pig and a cow among the decorations.

Roman and Loretta could be seen sweetly dancing together int he middle of the room, with Lucy writing: "Birthday girl", alongside a pink heart emoji. Later on, Loretta and her guests all tucked into a party buffet, which included snacks such as Party Rings and chips.

Lydia's younger brother Freddie could then be seen bringing out an incredible birthday cake, which was also farm-themed.

Doting mum Lydia held Loretta in her arms as she was presented with the lavish celebratory cake, and all of the guests sang to her.

Lucy captured the special moment, as well as a photograph of the stunning cake before it was cut. The two-tiered creation was covered in green icing, and featured a series of edible farm animals and trees. An edible sign was visible in the centre, which had 'Loretta Rose's Farm' written across it in white icing.

Lydia took to Instagram on Loretta's birthday, Monday 21 February, to share footage of the adorable party, and penned a gushing tribute to her two year old daughter.

"You made my life, my heart, my world complete

"You are my everything

"Birthday party of dreams for my wild child", before tagging the businesses which helped her create the lavish bash.