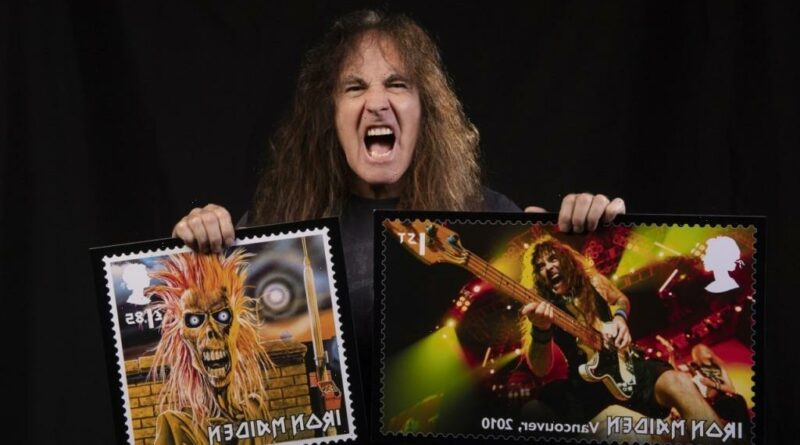 Britain’s Royal Mail has revealed images of 12 stamps being issued as a tribute to a seemingly unlikely but legendary British rock band: Iron Maiden, and their grisly illustrated mascot, Eddie the ‘Ead. See the images below.

Such stamps have been issued in the past for the Beatles, the Rolling Stones, Queen and Pink Floyd, but the long-running heavy metal band represents a relatively new frontier in the field. As snail mail declines in relevance, such stamp series represent an imaginative way for national postal services to generate revenue.

The stamps are available in a wide series of packages, ranging from modestly priced envelopes, postcards and standard stamp sheets to a limited edition gold stamp set (£149.99) and the priciest item, “Limited Edition Platinum Eddie Stamps” that come in a custom flight case and list for £199.99. See the full offerings here.

Eight of the 12 stamps will feature images of each of the band’s members during classic performances performances ranging from 1983 through 2018, while a further four depict Eddie in his various illustrated guises over the years.

Iron Maiden co-founder and bassist Steve Harris (pictured above) says, “We were all absolutely astounded – in a good way! – when we heard first about the commemorative project, and equally pretty much speechless when we saw the stamps for the very first time. They look superb and I think they really capture the essence and energy of Maiden. We’re all very proud that Royal Mail has chosen to honour the band’s legacy like this and we know our fans will feel the same way,”

David Gold, Royal Mail’s director of external public affairs & policy, added, “Few bands in the history of rock music can be called bona fide rock legends – but Iron Maiden are just that – and more. With legions of devoted fans of all ages and from every corner of the globe, not only have they changed the way rock music sounds, but they have also changed the way it looks. We fully expect their fans will love these stamps as much as we do.”

The stamps and other products are available to pre-order from today (January 5) at www.royalmail.com/ironmaiden. The stamps go on general sale from January 12, 2023 with a Presentation Pack containing all 12 stamps priced at £17.70.