Home » Lifestyle » Is it rude to talk about money? Here are the rules

"Quite busy so I'll join you for drinks later." This is my stock text response to almost any invitation to eat out, accompanied by a smattering of emojis, selected to detract from the fact that I'm lying. Somehow, the truth – "I don't have $120 to spend on one meal" – is a much harder message to send.

I don't mind admitting that I earn less than most of my friends. (No one has ever plotted to get rich quick as a freelance journalist.) But my social circle consists of a broad spectrum of people: some have been given millions of dollars by their parents while others are sofa-surfing following an unexpected redundancy. 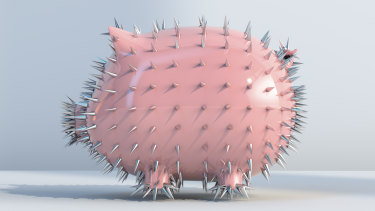 ‘I was brought up believing that talking about money was crass. Money – alongwith politics and sex – was taboo.’Credit:Stocksy

If some friends could see my bank balance they'd be gravely worried, while others might be envious that there is anything there whatsoever. And yet I've also wondered on more than one occasion if friendships can survive gulfs in wealth.

I've felt resentful of my peers who have multiple assets and never seem to acknowledge what an extraordinarily auspicious position this puts them in, instead trying to pass it off as a "this old thing" footnote. I suppose it's better than those who whine about their tenants wanting them to fix the cistern in the loo of their second property on a Saturday morning. I also try to be careful not to moan about my "horrible kitchen" in front of friends who are struggling to get on the property ladder.

Sure, my bank account is a barren wasteland and I'm forever selling moth-eaten cardigans on eBay, but I'm hardly destitute. I have a Nutribullet, can go on holiday and afford a half-head of highlights when I need to. I am never hungry or cold. I am privileged to the tune of being middle-class and privately educated. And yet, I constantly feel disoriented and confused when it comes to wealth – when to be honest about my finances, and what to keep to myself.

I'm not the only one who is in murky financial waters. A recent UK report found almost half (47 per cent) of people say their close friends don't know they have any debts at all. And a 2016 Australian survey found that one in seven women with children in the household were hiding debt from loved ones.

I was brought up believing that talking about money was crass. You didn't ask people how much they earned, and house prices were never bandied about. Money – along with politics and sex – was taboo.

The explosion of social media has changed all that. It doesn't take a sleuth to work out whether someone has cash to spend. And yet money is still a thorny topic, full of potential for creating envy, resentment and guilt.

"People turn money into an emotional subject all the time," says psychologist Emma Kenny. "In our society, we have been brought up to believe that what you have defines who you are. If you buy into it you are likely to feel like a failure sooner or later."

People frequently equate money and happiness, she adds, "no matter that studies have shown time and again that happiness levels between the rich and the poor are actually the same".

Women are more likely than men to have experienced, at some point, mental health or wellbeing issues linked to money, according to research.

When it comes to jealousy, Kenny believes it's easier to digest and accept when people have made their own wealth. "It's normal to feel jealous if you are trying to earn money and someone else is just given it," she says. I can relate. Take Kate, my best friend from university. This is the girl who once showed me how to make baked bean pasties – a batch of six cost less than $2. We shared clothes and when we had nothing left in our accounts we'd pool our money on the kitchen table.

That she now works for a bank and the fact that she's bought herself a property with no help whatsoever from a parent or spouse, using only her iron will to save each month for over 12 years, makes me so extraordinarily proud I wouldn't care if she sent me a selfie dressed head-to-toe in couture Chanel inside a wind tunnel of $50 notes while mainlining Crème de la Mer.

When I saw Kate's place for the first time, the bathroom was a tiny hellhole of cracked bile-coloured tiling; not even an Aēsop soap dispenser and hanging succulents could make it pretty. But we sat on the side of the bath and drank wine and it was magical.

This experience was in stark contrast to the time I complimented a friend on the sublime views from his new flat. "But I won't get any more inheritance now," he said in a glum tone, as if I was supposed to admire his plum piece of real estate and then indulge him with sympathy, too. He gave an "it is what it is" shrug. Well, boohoo.

Other questionable behaviours relating to money include (but are not limited to): wailing about the stress of house-hunting; assuming people with more money than you should always foot the bill; making snide "it's all right for some" comments; claiming to be too poor to contribute to a group gift and then showing up in a new-season Helmut Lang coat.

Friends with lower incomes speak of feeling grateful but awkwardly indebted to those who show them kindnesses, like treating them to meals. Meanwhile, those with more admit to not always knowing where the line is between generous and patronising.

So what is the etiquette for talking about money? "Money is the oil that greases the wheels of society," states Debrett's A-Z of Modern Manners, "but oil is filthy sticky stuff and we should clean our hands of it before coming out in polite company."

Except we definitely shouldn't, according to many voices fighting for female equality. The lack of transparency around finances is one of the reasons why the average gender pay gap in Australia stands at 14 per cent. It does us no favours when it comes to friendships, either.

"Be honest with each other," says Kenny. "Money is important, but we've given it far too much power."

Being honest without coming across as boastful or tactless, or looking like you want sympathy, is no mean feat. But for tomorrow's financially independent generation, walking that line will feel more natural.

ASIC's MoneySmart Teaching Program, launched in 2012, is bringing financial education to schoolchildren, with topics including budgeting, needs versus wants, the history of money and mobile-phone activity. And those lessons seem to be sinking in, with a 2015 survey placing Australia's mean financial literacy above the OECD average. Students who first discussed money matters with family rather than friends scored highest.

I, for one, am planning to stop being so squeamish when it comes to money talk. I'm going to make an effort to be more honest about my finances rather than tiptoeing around the "m" word. And finally, I'll stop letting emojis do the dirty work.

What's your money etiquette rating? Have you ever …

– Lied about withdrawals from the Bank of Mum and Dad?

– Insisted on splitting the bill after ordering the most expensive wine on the menu?

– Left your wallet in your bag when out with wealthier friends, expecting them to foot the bill?

– Waxed lyrical about your home reno to a Gen Z colleague with no hope of buying a house?

– Asked for "mates' rates" from a friend's business?

– Instagrammed a wildly expensive gift which "hubby bought me — just because"?

4-6 Whoa! You need to work on those money manners.

This article appears in Sunday Life magazine within the Sun-Herald and the Sunday Age on sale July 14.