Home » Lifestyle » Is it sexist to buy dolls for girls?

Is it sexist to buy dolls for girls? Loose Women debate whether Barbies set a bad example

Loose Women asked the question on Monday ‘is it sexist to buy a girl a doll for Christmas?’

Commenting on the recent trailer for Greta Gerwig’s Barbie movie that will be in cinemas next year, the panelists on the ITV show discussed if it is an outdated perspective that girls only want to play with dolls.

In the trailer Margot Robbie is seen as Barbie in a black-and-white one piece swimsuit with sexy open-toe heels on a beach.

She is larger-than-life as little kids stare up at her, throwing their baby dolls away as they gaze on at the new, fabulous bombshell.

Brenda Edwards said that she ‘loved’ Barbie and all her different accessories, even coining it ‘value for money,’ because you would get one doll and change all of its outfits.

The singer and actor, 53, said that playing with dolls such as Tiny Tears and Teeny Tiny Tears, alongside her Barbies, never made her think, “Oh I’m going to live in the kitchen’.

Janet Street-Porter was quick to jump in and agree.

Instead, the TV personality expressed concern over the look of Barbie and suggested that the dolls were telling young girls that the Barbie figure is the most desirable shape. 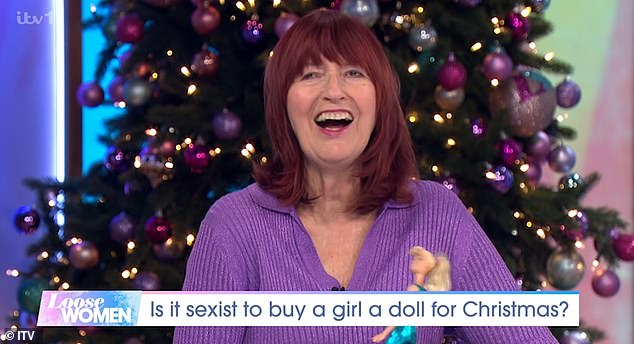 Loose Women asked the question ‘Is it sexist to buy a girl a doll for Christmas?’ after the release of the new Barbie movie trailer 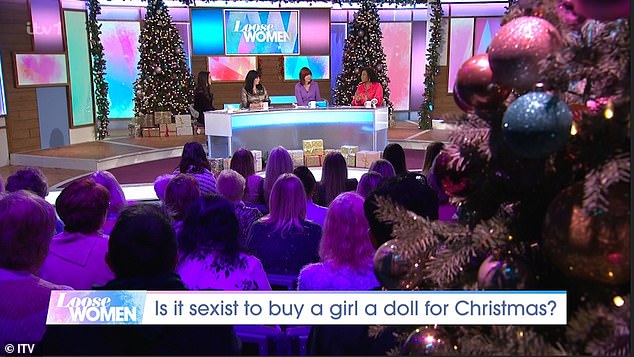 Brenda Edwards said that she ‘loved’ Barbie and all her different accessories, even coining it ‘value for money,’ as you would get one doll and change all of its outfits

Coleen Nolan, 57, pointed out that there are more ‘shapely Barbies’ now and that she personally was never into Barbie dolls.

Agreeing with Brenda, the singer was also a fan of baby dolls and said her favourite was Tippy Tumbles – a baby doll from the 1970s.

She said: ‘And Barbie to me was just boring. 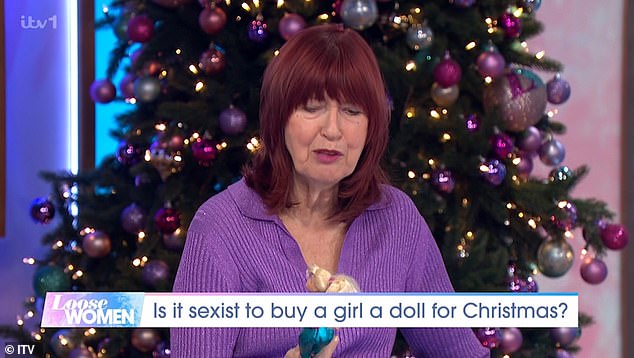 Janet then revealed: ‘I only had one doll, my mum and dad gave me a doll and I ripped the arms and legs off because I really wanted a Meccano set.’

She went on to say: ‘It was only my 30s and 40s that I started seeing that Barbie was absolutely hilarious, but I really loved Ken.

‘Oh I love Ken, you can shout at him. He’s not judgmental.’

Ending the debate Christine Lampard, 43, said that she was scared of dolls when she was a child while her daughter ‘absolutely loves them.’

Loose Women’s viewers took to Twitter to share their opinions on whether it was sexist to give girls dolls. 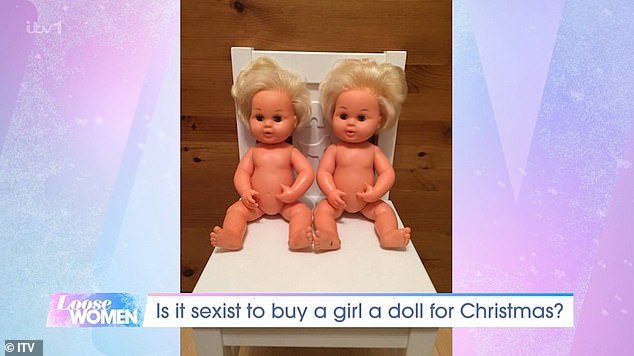 Coleen Nolan, 57, and Brenda Edwards, 53, admitted to loving the Tiny Tears dolls when they were children

One viewer tweeted: ‘Is it sexist to buy a girl dolls? I always hated toy shopping. The blue and pink aisles. Dolls and prams and domestication in miniature in the pink aisle, and replicas of the weapons of murder and destruction in the blue aisle #LooseWomen.’

A second said: ‘No it isn’t sexist. There is plenty of psychological research on the sexes that show that girls do gravitate naturally to things like dolls etc… and boys trucks etc… The sexes have differences and these differences show from early childhood. #LooseWomen.’

While a third joked: ‘They now have a new Barbie doll out this Christmas “Divorce Barbie” she come with loads of accessories, Ken’s house, Ken’s car, Ken’s boat, Ken’s bank account.’

And a fourth said: ‘I was more a Power Rangers girl. Yes I had Barbies but if they were both in front of me I’d go for the rangers #LooseWomen.’

One person said: ‘@loosewomen surely the question should be ‘is it sexist not to buy a doll for a boy?’ (who wants one )’

And another tweeted: ‘#LooseWomen I played with dolls until I was 12,then I got my first RC Car ( Tamiya) and that was it, I was hooked. I had Ford RS Coswrth and RS 2000 on my walls lol.’