Home » Lifestyle » Is Mariah Carey’s All I Want for Christmas Is You the best song ever?

This week, 25 years after it first played in a shopping centre food court, Mariah Carey's All I Want for Christmas Is You reached No.1 on the US's Hot 100 Billboard chart, outpacing hit singles by the likes of Post Malone and Lizzo.

In Australia, that milestone was reached last year when the single topped the ARIA charts in late December, beating the No.2 peak it set on its initial run in 1994. At the moment it's already back in the top 10 locally, and – as middle-aged party-people set their seasonal Spotify soundtracks while glazing ham or whatever – it's likely to make a challenge on Tones and I's record stint at No.1. 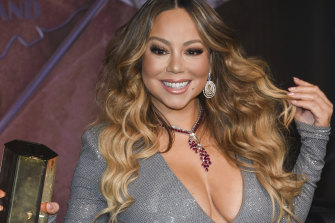 Mariah Carey’s All I Want for Christmas Is You has hit #1 25 years after its release.Credit:Invision

The song, originally released in October 1994, has seen its cultural impact explode in the streaming era, with plays reaching 185 million in 2018, according to Nielsen. Last Christmas Eve it set a streaming record when it was played more than 10.8 million times in just one day.

So, at this point – with its ridiculous longevity and towering playback numbers – is Mariah's All I Want for Christmas Is You officially the best song ever?

Well, in a world where Blink-182's M+Ms exists, no of course it's not. What are you, high on allspice fumes? But its lingering success definitely gives it a strong case.

First of all, there's the tune itself, with its opening boost of dramatic sleigh bells and Mariah's iconic vocals, in which a word such as "Christmas" becomes "Caaaaaaa-reeeees-a-maaaa-aaaaa-sssssssss", before bursting into a double-time singalong evoking Phil Spector's '60s girl groups. It's undeniably joyful, like unpacking a lame Christmas gift but finding it comes with an exchange voucher.

There's also some subliminal manipulation as websiteVox recently explained, with the song – co-written and produced by Carey and Walter Afanasieff – borrowing a "secret chord" (known to nerds as Dm7b5, or a D minor seventh flat five, or plinky-plonk) from that warmest of seasonal standards, Bing Crosby's White Christmas, penned by Irving Berlin in 1942.

Like all epic stories, there's a tinge of darkness behind the track, too. Carey, famously, didn't want to record the song, convinced the novelty track would stutter her blossoming career. Of course, her record label was like, "Well, what if we just rip up your contract and you can go back to singing in pizza shops? We have Michael Bolton, we don't need you…", so she recorded the song with tears running down her cheeks and pain in her heart (this might've been a scene in Glitter, not sure).

In the song's memorable music video, Tommy Mottola – music biz impresario and Carey's then husband, who she married when she was 23 and he was 43 (they divorced in 1998) – plays Santa, cuddling and wrestling with Mariah in the snow in a playful evocation of the song's central conceit.

Carey later compared being married to Mottola as "almost like being a prisoner".

"You might want to picture a child bride," she told Cosmopolitan in July. "There was a conscious effort to keep me as this all-American, whatever that means, girl. There was no freedom for me as a human being." Think about that on Christmas Eve when you're drunkenly bellowing the song while dipping your panettone in a bourbon highball.

Even with its record-setting historical run, not to mention the comforting trillions in royalties, Carey still seems uncertain of the song's place in her musical legacy.

"As a songwriter, I look at some of those songs from Butterfly, or Looking In from Daydream, or My Saving Grace from Charmbracelet, where I know how deep I went as a writer. But All I Want for Christmas Is You gives me a feeling of happiness I can't describe, so it's a different thing," she told Entertainment Weekly this week.

"Yes, it's a hugely successful song. Do I think it's the best song that I've ever written? I don't know how to judge that."