Australia has produced more than its fair share of Hollywood superstars, but Hugh Jackman is unique in possessing the talent and the desire to fill live concert venues worldwide.

His latest global tour touched down at Melbourne’s Rod Laver Arena on Friday night, with Jackman – at 50 relaxed, dripping charisma and at the height of his powers as an all-round entertainer – standing ready to mesmerise an enthusiastic sold-out crowd. 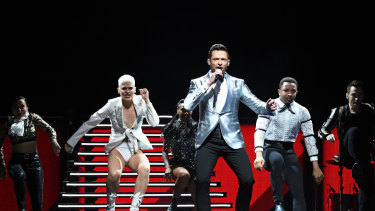 Hugh Jackman performs onstage in The Man. The Music. The Show.Credit:Kevin Mazur/Getty Images

Jackman’s autobiographical concert Broadway to Oz impressed in 2015, and this one’s even better. Kicking off with two numbers from The Greatest Showman – The Greatest Show and Come Alive – the star and his back-up dancers whipped up the kind of triple-threat storm musical theatre fans live for.

One thrilling aspect of seeing Jackman in the flesh is the way he can glide from high-octane showstoppers into a spontaneous, intimate rapport with the audience.

The show is a carousel of visual and sonic splendour – rock-concert style lighting and video projections, a stellar live orchestra, and not one but two choirs – yet the moments when Jackman stops the ride to tell honed personal anecdotes, or engage in playful banter with fans, command the highest form of charismatic authority: he makes you feel, in a stadium of 12,000 others, like you’re the only person in the room.

His infectious love of Broadway provides many highlights. One set-piece combines songs from Les Miserables, with Jenna Lee-James soaring through I Dreamed A Dream. Another more pop-oriented sequence, dedicated to New York, time-travels from Frank Sinatra’s signature tune to Jay-Z and Alicia Keys’ Empire State of Mind.

Jackman reprises a mega-medley of Peter Allen songs – flouncing across stage maracas in hand for I Go To Rio; sitting down for his heartfelt acoustic version of Tenterfield Saddler. He sings as Gaston from Beauty and the Beast, swells into a huge choral number with You Will Be Found from the musical Dear Evan Hansen, and jazzes up classics such as Sing Sing Sing, Luck Be A Lady and Mack the Knife.

Although he seems pleased to have relinquished the role of hyper-masculine mutant Wolverine after 17 years, the star still enjoys mocking those who see musical theatre as an effeminate pursuit. They can stick Jackman’s furious tap-dancing routine (to Acca Dacca’s Thunderstruck, no less) in a pipe and smoke it.

Not all the glory belonged to Jackman. Keala Settle’s rendition of This Is Me from The Greatest Showman raised the arena’s retractable roof; the uplift soared into the stratosphere with her single Harder. And the Indigenous performers in the show anchored and deepened the last homecoming sequence by preceding it with Aboriginal language, music and song.

The show’s rousing farewell – split between From Now On and I Still Call Australia Home – proved a splendid finale for a star performer who seemed as delighted as his audience to be back on native soil.

Kanye West 'Completely Changed' the Kardashian-Jenner Family, According to Fans