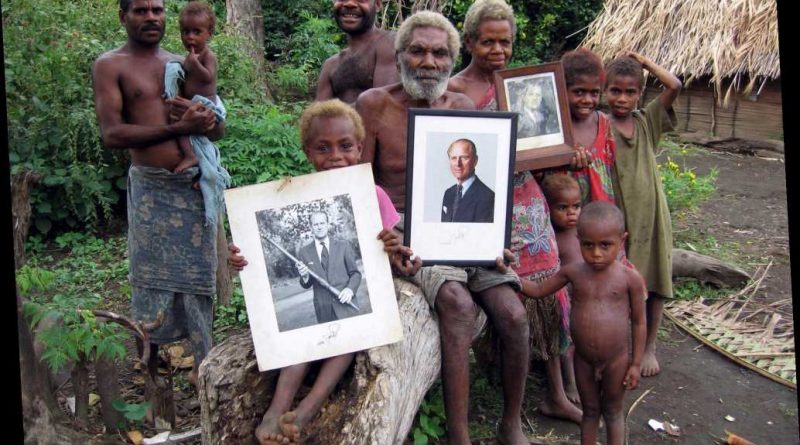 Since his hospitalization for an infection on Feb. 16, global concern has swelled for the health of Britain’s 99-year-old Duke of Edinburgh, aka Prince ­Philip.

But news of the royal’s illness is only just reaching the South Pacific island of Tanna, where an estimated 700 of its 29,000 inhabitants worship the royal as a god.

The tribesmen in the village of ­Yaohnanen — a tropical rainforest with spotty communications — believe the husband of Queen Elizabeth II is descended from an ancestral spirit who watches over them.

Jean-Pascal Wahé of the Vanuatu Cultural Center told The Post that he planned to tell natives of the royal’s condition Saturday.

“A lot of people here will be worried when they hear,” Martin David Nilwo, the region’s tourism manager, told The Post. “They have carefully preserved the Prince Philip Movement as one of their valuable cultural assets.”

The movement is similar to the post-WWII “cargo cults” where natives of various Pacific islands attributed the delivery of goods from more technologically advanced ­societies to certain rituals.

But the deification of Prince Philip — whose portrait was prominently displayed in public buildings before the archipelago of Vanuatu gained independence in 1980 — was cemented almost half a century ago in 1974, when he accompanied Queen Elizabeth to the nation’s capital, Port Vila, aboard the royal yacht Britannia.

“One of the oarsmen taking them ashore was a chap from Tanna called Chief Jack,” former Buckingham Palace spokesman Dickie Arbiter recalled to The Post. “He thought Philip was a warrior from a long time ago who had come down from the mountains and gone off to England in search of a bride.

Word soon caught on that the duke was the reincarnation of a guardian of Tanna.

“From the believers’ point of view, he is not English but from their island,” said anthropologist Kirk Huffman. “The original spirit of which he is in the process of recycling is one of their own people.”

Indeed, when interviewed about Prince Philip for the Christian Science Monitor in 2007, Chief Jack Naiva told the correspondent in Pidgin English: “He is a god, not a man.

“Sometimes we hear his voice, but we can’t see him.”

Now, Huffman said the tribes-folk will be filled with sorrow once they learn of their royal idol’s condition.

“They were hoping he would return in person, but the likelihood of that is now very unlikely,” added Huffman, the honorary curator at Vanuatu Cultural Center. “But they will imagine his spirit might come back to the island.”

The followers, some of whom still wear traditional grass skirts, treasure a small collection of gifts from Prince Philip who, according to Arbiter, “has gone along with [the attention] and is very flattered by it

”They include a faded photograph of the Duke formally posing in a suit and tie with a Nul-Nul, a traditional Vanuatuan fighting club often used for beating wild pigs, which he received from Chief Jack. Another picture shows him meeting a ­delegation of five Tannese men at Windsor Castle in 2007.

“There is an immense amount of mutual respect between them,” said Huffman, who noted that Philip’s oldest son, Prince Charles, spent four hours in Vanuatu in April 2018.

Luckily, there was enough time for Jimmy Joseph, a member of the sect, to present Charles with a carved wooden walking stick for his dad.

Handing over the symbolic cane at the airport in Port Vila, Joseph told Charles: “This is to help your father to walk because he is very old.”

Some might say the veneration for Philip is ironic, given his history of politically incorrect gaffes. In 2006, he asked a British backpacker in Papua New Guinea: “You managed not to get eaten then?”

But such faux pas matter little to his disciples. Today, as painful as it is, the tribes-folk are planning a commemoration of their idol as he moves closer to the end of his mortal existence.

“They will be in grief-stricken mourning,” said Huffman. “There will be ritual wailing and also a series of dances that encapsulate parts of the island’s history.”

Wahé said islanders believe that Philip’s spirit “will come to Tanna” — and that the movement will continue with “Prince Philip’s successor, Prince Charles.”