Home » Lifestyle » ‘It was her ancestors calling her’: How Emu Runner took flight

Imogen Thomas first went to live in Brewarrina in northern NSW 16 years ago. Her job was to instigate and film an art project at the local women's shelter; her idea was that they could all make a garden.

"Well, I quickly realised it wasn't going to work," she says. "When you're in a state of crisis, you can only think moment to moment. Anyway, to bring out a camera at that early stage felt really gratuitous. To take a back seat, that was the best thing." 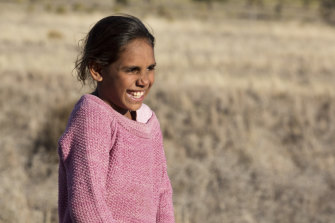 The art project was diverted into filming social gatherings, smoking rituals and simple talk. "It was a great experience for me to connect with people," says Thomas. "A privilege, getting to know people's lives, hardships and struggles. From that time on, I maintained friendships."

Five years later, she suggested to a local pre-school teacher that they involve kids in making a short film. The result was Mixed Bag, about a woman whose life takes a turn when her car breaks down in the remote town. It was a community triumph. "Everyone felt like they had done it together, because we had to scramble it together from nothing, so they were like, ‘Let's make a feature!' That was the beginning of it all."

And now there is Emu Runner, the story of a nine-year-old girl who grows powerfully attached to a wild emu after her mother dies. Thomas developed and filmed it in Brewarrina with elders' support, a largely local cast and a crew of volunteer professionals. Wayne Blair also chipped in, taking on the role of Gem's grieving but determined father in between shooting days on Mystery Road.

Thomas had tried and failed to get funding, but went ahead anyway. "I suppose it's just about you say you're going to do something and then you deliver it," she says.

It is hard to believe such a subtle, luminous film was made with so little. Gemma, played with a compelling naivete by Rhae-Kye Waites, is becoming a champion runner at school. In the bush – where she learnt from her mother how to care for herself – she measures her speed against the emu, her totem animal passed down on her mother's side. Within the context of the film, this bond is moving but also quite matter-of-fact.

I meet Thomas at the Toronto Film Festival with Mary Waites, a Brewarrina community leader and Rhae-Kye's grandmother who was also in both films. Waites is a sunny presence and palpably a pillar of strength.

"I want to tell you about the emus," she says finally. A couple of times during filming, she says, Rhae-Kye became exhausted and declared she wanted to pull out of the project. On the worst day, she just took her home, knowing this was a crisis.

A mob of eight great birds gathered at the river that runs by their house. "I had this feeling go through my body. I knew this was our ancestors, so I went in and said, ‘Rhae, you need to see this. I'm going but you need to come out'."

A few minutes after she got back to where they were shooting, Rhae-Kye walked in asking what she had to do next. "She knew it was her ancestors calling her. We left it to them to say, ‘Rhae, it's time to finish the movie!'" Whoever they were, those emus did the right thing.

Merkel visits Greece in show of 'EU solidarity' amid protests