At the start of 1975, Smith was standing on the rim of stardom in the rock world. Her voice had been heard in small places such as in performance art and poetry readings, but in '75, the Patti Smith Group coalesced and from that by the end of the year came Horses. It was a stampede of words and music that would shake the ground. 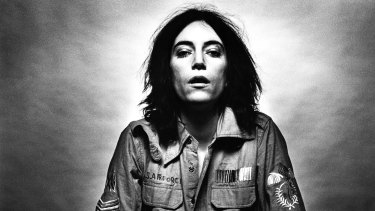 Patti Smith in 1976, the year Radio Ethiopia was released.Credit:Getty Images

At the time popular music was beginning to fracture. Punk and new wave were about to explode, carrying the message that there were other ways to express yourself, and lead others with you. Horses was neither nihilistic nor narcissist. It was punk and poet, and it was universally acclaimed. This was a blessing and curse, for after the first must come the second, a consequence known in some circles as invoking the Difficult Second Album Syndrome. How do you follow a masterpiece?

Without even listening to the second, Radio Ethiopia, there were two clues on the album cover. First, the front image. Whereas Horses’ portrait of Smith by friend Robert Mapplethorpe has a declamatory presence, on Radio Ethiopia, Smith is sitting, not standing, on a floor, looking like a guerrilla fighter after another skirmish, and preparing for the next. She looks not directly to you, but to the side. On the reverse is a quote from Nadja, the novel of surrealist/socialist Andre Breton: “Beauty will be convulsive or it will not be at all.” 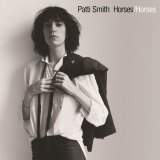 The cover of Patti Smith’s Horses album, with its iconic photograph by Robert Mapplethorpe. 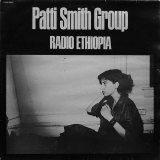 The cover of Radio Ethiopia.

Radio Ethiopia, thus, was beauty unbounded. It wasn’t tethered to the reins of Horses. Unlike the golden threads of the first, Radio Ethiopia was a ragged glory of compelling rock and roll propulsion and the babel of poetic impulses. It was tied together with a feverish commitment to create and perform outside the boundaries, not be defined by others, but to push the limits, and thus in that freedom to go your own way.

And so predictably in the realm of critical expectations, it was deemed a failure. As a consensus, it says more about the listener than the music. As Smith was pointing out, art answers to no one. If it did, then what would art be but society’s expectations. And as Smith has shown from the beginning, art must operate outside society. “Radio Ethiopia is a field, a fist, a first rush of pleasure pumping, is a celebration of the boxer and the dancer,” she wrote.

To be such a prime mover, one must become messenger, talking in tongues, talking in scat, in the rumbling ruminations of the divine and the profane. One must become a revolutionary, who seeks to overthrow and redeem through rock and roll. One must have faith in the power of words, whether it be wedded to the power of a Marshall stack and an electric guitar, or to the stillness of the air and the breath of your voice, your unique voice. Harmony and dissonance sparked on the neck and strings of a guitar, fuelled in the throat of a singer, committed to her art. Devoted to the creation. Committed to the beauty.

Smith was following two of her literary heroes, one tacitly, William Blake, the other overtly, Arthur Rimbaud, with whom she fell in love when she picked up his Illuminations as a teenager. Radio Ethiopia is dedicated to Rimbaud and sculptor Constantin Brancusi.

Rimbaud had flared across the literary sky in the late 1800s, but departed to then Abyssinia, trading in – among other things – coffee, guns and humans. He turned his face from the world he had known for a new alien world. He stopped writing before he reached 21. Radio Ethiopia was released in late 1976, the same year that ABBA had encircled the globe with Dancing Queen, Peter Frampton with Frampton Comes Alive and The Eagles with Hotel California. And yet rising from the cracks emerged a different creature entirely, all bile, anger, attitude and disdain for the establishment, both musical and societal. It was Johnny Rotten and cohorts. It was The Sex Pistols spewing forth Anarchy in the UK. It was also Tom Verlaine’s Television, and it was Patti Smith and her group: Lenny Kaye, Richard Sohl, Jay Dee Daugherty and Ivan Kral. Sohl died in 1990 and Kral just a few weeks ago.

Smith wrote, much as Dylan did on his early albums, impressions/notes and fragments of thoughts. On Radio Ethiopia was this: “In the past, the artist has existed within society in two disguises … the slave or the exiled …. The art emerging from the boundless scope of rock and roll needs no other patron but the people.”

Of the album, she has said: “I wanted to do a record that wasn’t just a cerebral experience – it was more of a physical record.”

That physicality kicks in from the opening bars of the opening song Ask the Angels. The slow build-up on Horses is gone. Whereas there is a deliberate brooding when Smith sings “Jesus died for somebody’s sins, but not mine”, on Angels she throws out a command: “Move. Move! Ask the angels who they’re calling/Go ask the angels if they’re calling to thee.”

Perhaps they’re the angels of Blake, first marked on the Horses liner notes: “Charms. Sweet angels – you have made me no longer afraid of death.”

In Just Kids, Smith writes: “Lenny showed me how to play an E and as I struck the note, I spoke the line, Jesus died for somebody’s sin but not mine. I had written the line some years before as a declaration of existence, as a vow to take responsibility for my own actions. Christ was a man worthy to rebel against, for he was rebellion itself.” 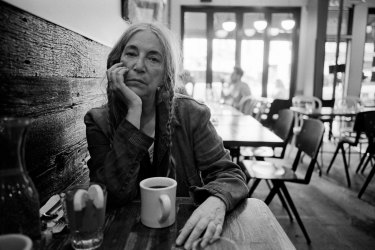 It’s arguable that Radio Ethiopia wouldn’t be the unloved one if it were not for its ending, the last two tracks Radio Ethiopia and Abyssinia. But in the album’s ending is its beginning. This is rock, Rimbaud, angels and wildness. In Smith’s evocation is the essence of her art. At the time Smith was known as the “Field Marshall” for there was a war going on; electric guitars, bass, drums and voice were the weapons against the non-imagined world. Radio Ethiopia was the manifesto for the battle cry of the new republic of art coming. Surely, this was the time for the power of words and music, meaningful art, to crash through or burn.

Two years later, Smith would have her greatest chart success in the collaboration with Bruce Springsteen in Because the Night. Twenty years later, she would release Gone Again, an album of loss following the deaths of her husband Fred Smith, brother Todd, Kurt Cobain and Robert Mapplethorpe.

And 20 years on from then, she is still touring, delivering angels of poetry, beauty unbounded.

Patti Smith performs at Bluesfest, Byron Bay, April 11; The Enmore Theatre, Sydney, April 15-16; and The Forum, Melbourne, April 21-23. She also appears in conversation with Lenny Kaye at Melbourne’s Athenaeum on April 20 (sold out).