Home » Lifestyle » ‘I’ve never had an audience reaction like that’: Mike Nock revives his masterpiece

November, 1981. Mike Nock is in a studio in Oslo, recording what would become a seminal album in his long career: Ondas. He and the rest of his trio (bassist Eddie Gomez and drummer Jon Christensen) are approaching what they think is the end of the atmospheric, slow-rolling piece Forgotten Love. They’re fading into silence when they see ECM label boss Manfred Eicher in the control room, gesticulating wildly at them through the glass: “Keep going! Keep playing!”

So they resume their rolling lilt, eventually producing a 15-minute masterpiece of musical hypnosis. 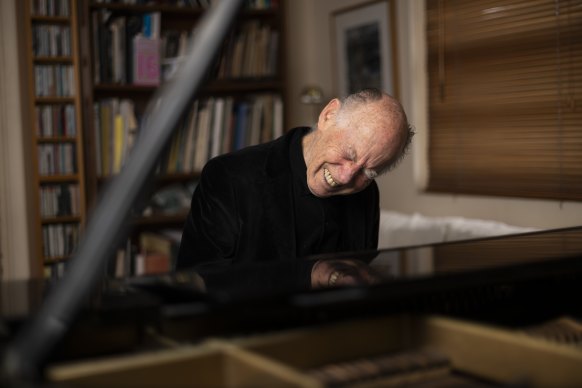 New Zealand jazz pianist Mike Nock ahead of his appearance at the Melbourne International Jazz Festival and the Wangaratta Festival of Jazz.Credit:Rhett Wyman

It’s recollections like these that make talking to Nock so entertaining. Now 82, the exuberant New Zealand-born, Sydney-based pianist has a lifetime of stories to share, and an abundance of insights to accompany them. We’re talking about Ondas, among other things, because he’s about to revisit this repertoire at the Melbourne International Jazz Festival (MIJF), 40 years after the album’s release.

Nock hadn’t listened to the album for several decades when he was invited to present it earlier this year in Sydney, and found the prospect daunting but exciting.

“I basically had to re-learn the whole thing,” he admits. “But it was a great opportunity to revisit it and get a different perspective on it.”

Habitually self-critical, Nock didn’t realise at the time of the recording that something special had been laid down on tape. “I didn’t think it was very good,” he says bluntly. But listening to it again after all these years has given him a new appreciation for the beauty of the compositions and the magic captured that day.

When he played the repertoire at Sydney’s Strata festival in March, the audience response was “insane” he says, laughing.

“I had no idea what to expect. The venue was full, and we went out there [on stage] I didn’t announce any of the pieces; I didn’t say a word. We just played. And when we finished, there was a pause … and then the place erupted! It was incredible. I’ve never had an audience reaction like that in my life.”

In Melbourne, Nock will perform Ondas with two young players from Sydney (bassist Jacques Emery and drummer Chloe Kim) – musicians he describes as “exceptional”, and who can provide the required sensitivity and freedom.

The indefatigable pianist is also appearing at MIJF with a quartet led by veteran American drummer Pheeroan akLaff. Nock says he and akLaff “go way back”, having first met and worked together while Nock was living in the US. He regales me with an array of colourful anecdotes to explain why he calls akLaff “Mr Unpredictable”, and affirms that audiences can expect an energetic “sonic experience”.

Then, at the end of the month, Nock returns to Victoria to perform at the Wangaratta Jazz Festival. He’s appearing there with This World, a superb all-star quartet featuring three musicians from Sydney (Nock, bassist Jonathan Zwartz and drummer Hamish Stuart) and Melbourne saxophonist Julien Wilson. Nock affectionately describes this band as a collective “where everyone contributes, and there’s a shared concept. There are no egos – well, there are a lot of egos! – but we all tame our egos so we can make music together,” he says with a chuckle.

This will be the first live edition of the Wangaratta Jazz Festival in four years, and Nock is delighted to be heading back there. “Wangaratta was the focal point of my musical existence for many, many years,” he explains.

While acknowledging that the festival has “had its problems over the years with finances and so on,” Nock is adamant that the event still holds a unique position in Australia. “The Wangaratta festival has always felt very much like a community, and it’s been a beacon of what this music is about. So I’m looking forward to it immensely.”

Mike Nock performs with Pheeroan akLaff at The Jazzlab on Sunday October 16, and presents Ondas in two shows on Monday night as part of the Melbourne International Jazz Festival. This World performs at the Wangaratta Jazz Festival on October 29.