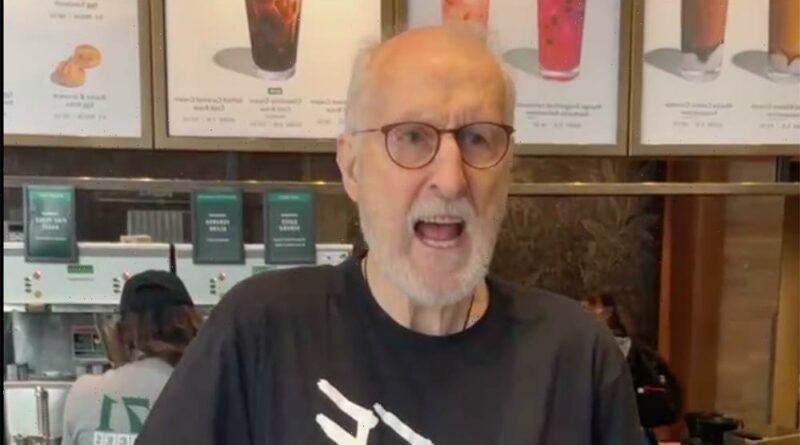 James Cromwell super-glued himself to the counter of a Starbucks in New York City to protest the coffee company’s increased pricing on vegan milk, CBS News reports. The protest was backed by PETA (People for the Ethical Treatment of Animals), which live-streamed the “glue-in” on Facebook. Cromwell was joined by other protestors and eventually freed his hand from the glue after police showed up at the Starbucks.

“My friends at PETA and I are calling on Starbucks to stop punishing kind and environmentally conscious customers for choosing plant milks,” Cromwell said in a statement about Starbucks charging more for vegan milk. “We all have a stake in the life-and-death matter of the climate catastrophe, and Starbucks should do its part by ending its vegan up-charge.”

PETA said in its own statement that the diary industry is “a major producer of the greenhouse gases that contribute to the climate catastrophe” and is “responsible for immense animal suffering.”

More than 135,000 supporters have joined PETA’s online petition urging Starbucks to stop charing more for vegan milk. The organization writes on its website, “It’s awesome that Starbucks offers so many delicious vegan milk options—such as coconut, soy, oat, and almond milk—but customers shouldn’t have to pay extra to have dairy-free milk in their drinks. More people than ever before are ditching dairy and going vegan to help animals, save the environment, and improve their own health. It’s time that Starbucks stopped charging customers extra for choosing dairy-free milks.”

“Starbucks should be encouraging customers to choose animal-friendly, vegan milk rather than cow’s milk,” PETA adds. “Many other chains—including Wawa, Panera Bread, Pret A Manger, Stumptown Coffee Roasters, Noah’s New York Bagels, and Philz Coffee—already offer dairy-free milk at no extra charge. Starbucks in the U.K. and the majority of the company’s stores in France have already dropped the vegan milk surcharge, and its stores in China, India, and elsewhere offer at least one vegan milk option at no additional cost.”

Cromwell most recently appeared in the third season of “Succession,” reprising his role of Ewan Roy, and popped up on an episode of the HBO Max series “Julia.”