James Middleton and his new fiancée Alizee Thevenet looked loved-up as they appeared in public for their first time since announcing their engagement during a cinema date alongside Princess Beatrice and new fiancé Edo Mapelli Mozzi.

The couple, who announced their engagement on Instagram earlier this month, stepped out for the premiere of the acclaimed documentary The Elephant Queen at The Electric Cinema in London.

James, 32, and Alizee, 36, appeared to be wearing matching cord jackets for the event, with Kate Middleton’s younger brother selecting a navy shade while his fiancée wore maroon.

They were joined by Princess Beatrice, 31, and her new fiancé Edo Mapelli Mozzi, 36, who announced their engagement mere weeks before James and Alizee. 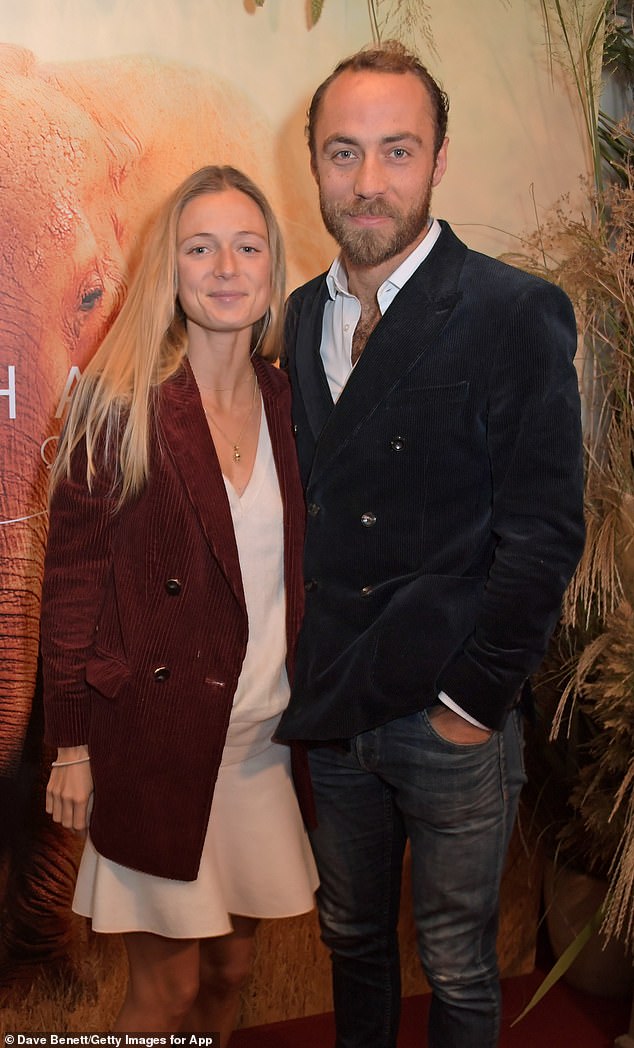 James Middleton and his new fiancée Alizee Thevenet stepped out publically this evening for the first time since announcing their engagement earlier this month (pictured, at the London Premiere of Apple’s acclaimed documentary ‘The Elephant Queen’) 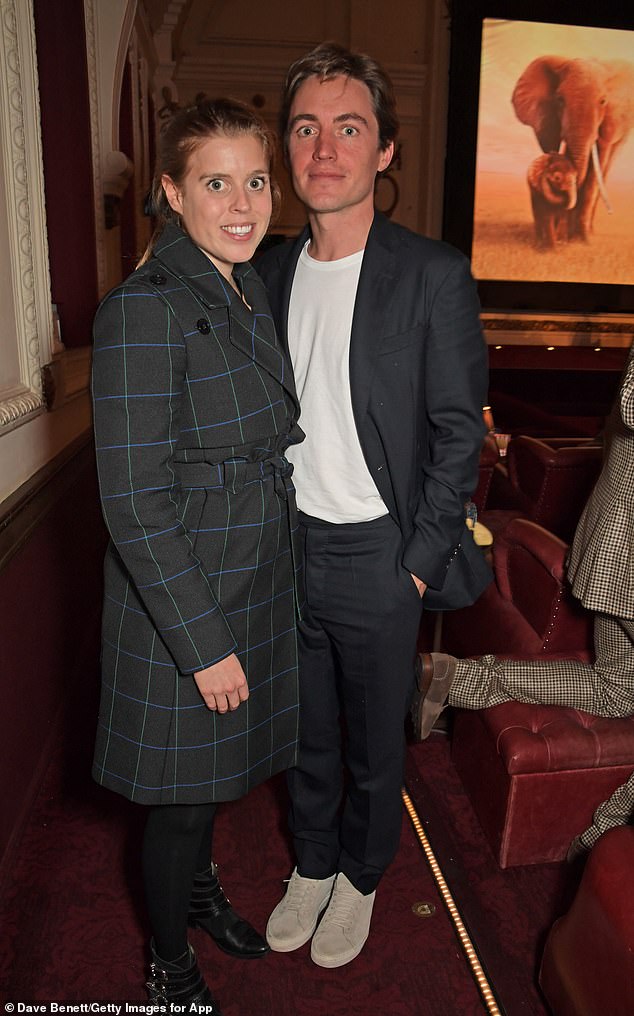 The couple were also joined by Princess Beatrice, 31, and Edoardo Mapelli Mozzi, 36, who announced their engagement mere weeks before James and Alizee

The couple looked relaxed as they posed for photographs at the premiere earlier this evening.

James wore blue jeans and a smart white shirt, with his jacket, while Alizee matched her jacket with a pale pink dress and boots.

Princess Beatrice wrapped up warm against the cool London evening in a checkered belted coat, over a tan coloured dress.

The royal donned a pair of black tights and ankle boots, and swept her hair back into a low ponytail for the understated date night with Edo. Meanwhile Edo donned a smart navy suit for the occasion, but kept things casual with a white t-shirt and trainers. 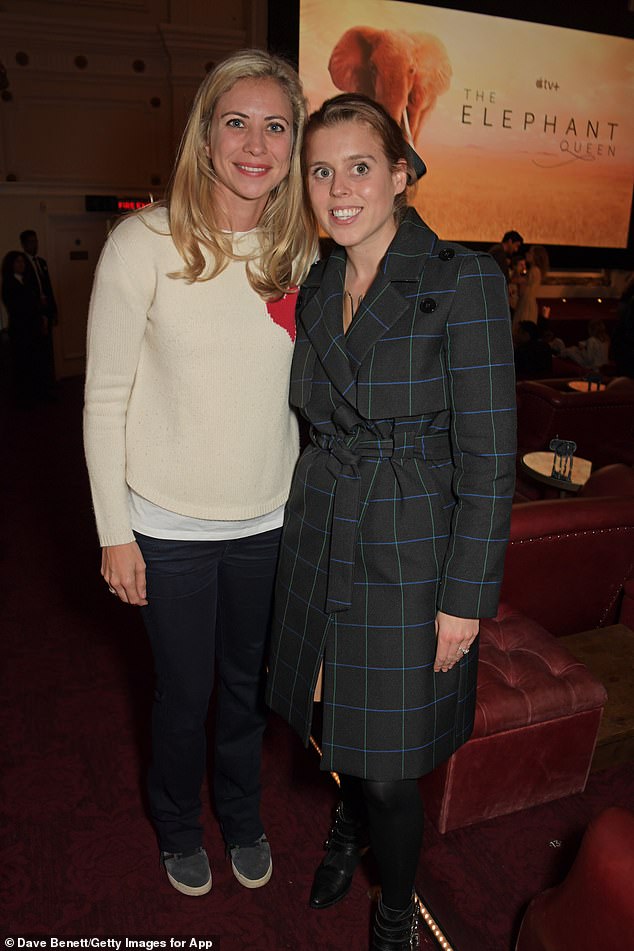 Princess Beatrice appeared fresh faced at the event, where she posed for photographs with Holly Branson 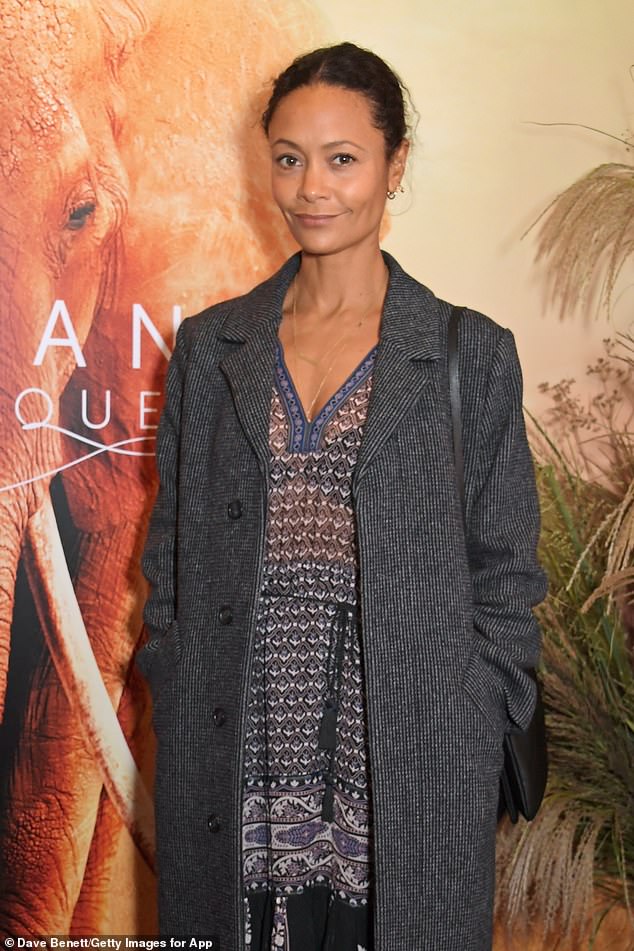 The Elephant Queen follows a female elephant who will do anything in her power to protect her herd when they’re forced to leave their waterhole.

The documentary film, which was directed by Vicotria Stone and Mark Deeble, promises to take audiences across the African savannah.

It was revealed at the beginning of October that James Middleton proposed to Alizee with a large sapphire ring, which may have been inspired by sister Kate Middleton’s.

The Duchess of Cambridge’s brother is believed to have proposed to French Alizee privately with a sapphire ring while in the Lake District. 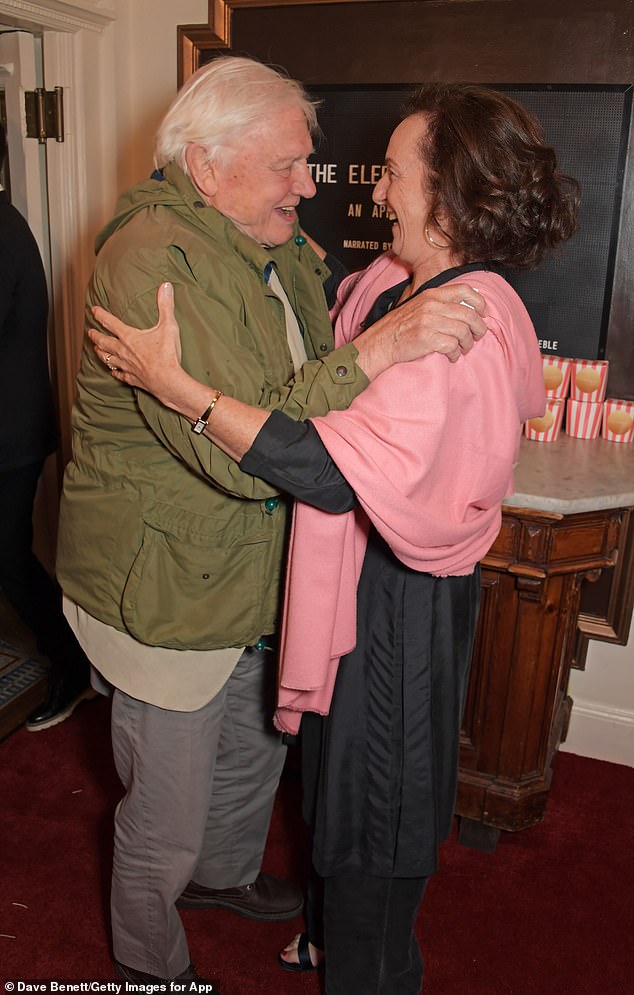 David Attenborough joined the royals for the premiere of the documentary this evening, and was seen embracing Victoria Stone 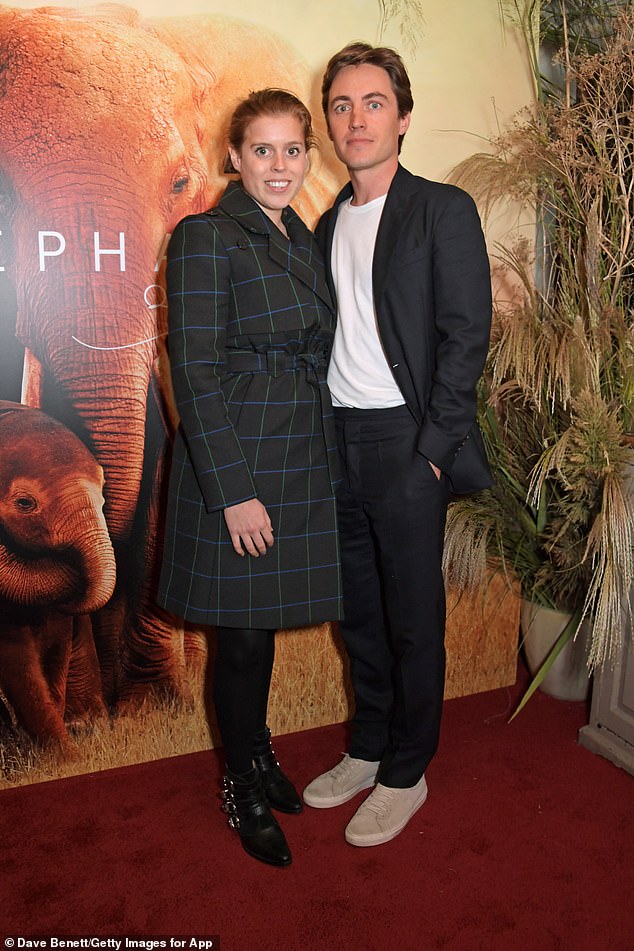 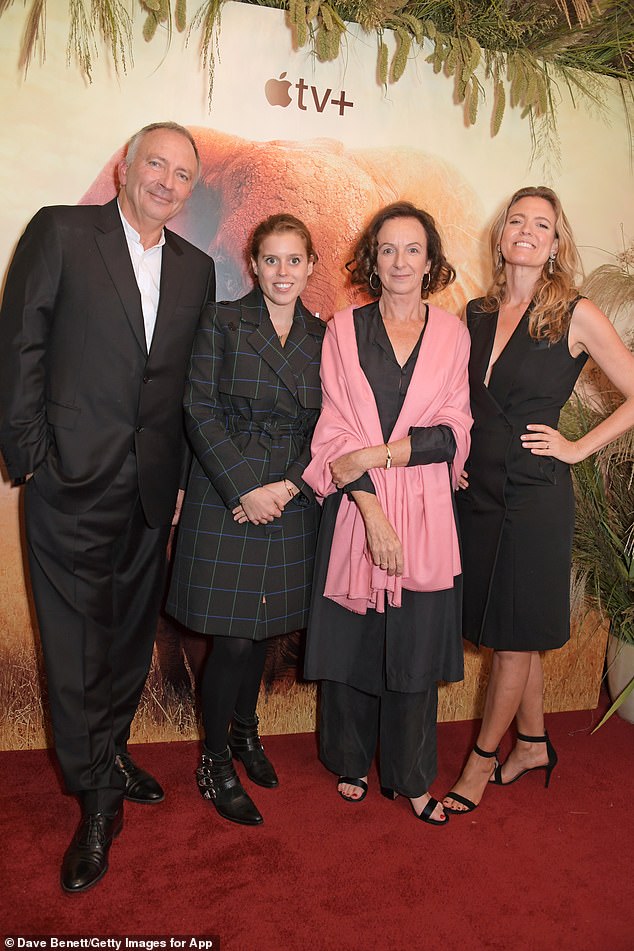 Princess Beatrice appeared in photographs alongside other attendees at the event, including Victoria Stone, Mark Deebie and Lucinda Englehart

James confirmed the news at the beginning of October as he shared a beaming picture with Alizee snuggled into his arms, revealing a large sapphire ring on her left hand.

Announcing the engagement to his 142k followers on Instagram, he posted several heart emojis, alongside the words: ‘She said OUI. Our secret is out but we couldn’t be happier to share the news.’

The couple have been dating for around 15 months now, and the pair were first spotted together at a Middleton family holiday in St. Bart’s over Christmas.

James tagged the post in the Lake District, with the snap thought to have been taken close to Coniston Water.

A timeline of James and Alizee’s romance

January 2019 – Alizee was first spotted with James while she holidayed with his sister Pippa and brother-in-law James Matthews in St. Barts

7 May 2019 – James shares his first snap with Alizee on Instagram, where the couple wear matching orange jumpers. He wrote: ‘Sail Away With Me’

5 October 2019 – Reports emerge that the couple are engaged, with James proposing in private to his beau

Announcing Beatrice and Edoardo’s engagement last month, a Buckingham Palace statement read: ‘We are extremely happy to be able to share the news of our recent engagement.

‘We are both so excited to be embarking on this life adventure together and can’t wait to actually be married.

‘We share so many similar interests and values, and we know that this will stand us in great stead for the years ahead, full of love and happiness.’ 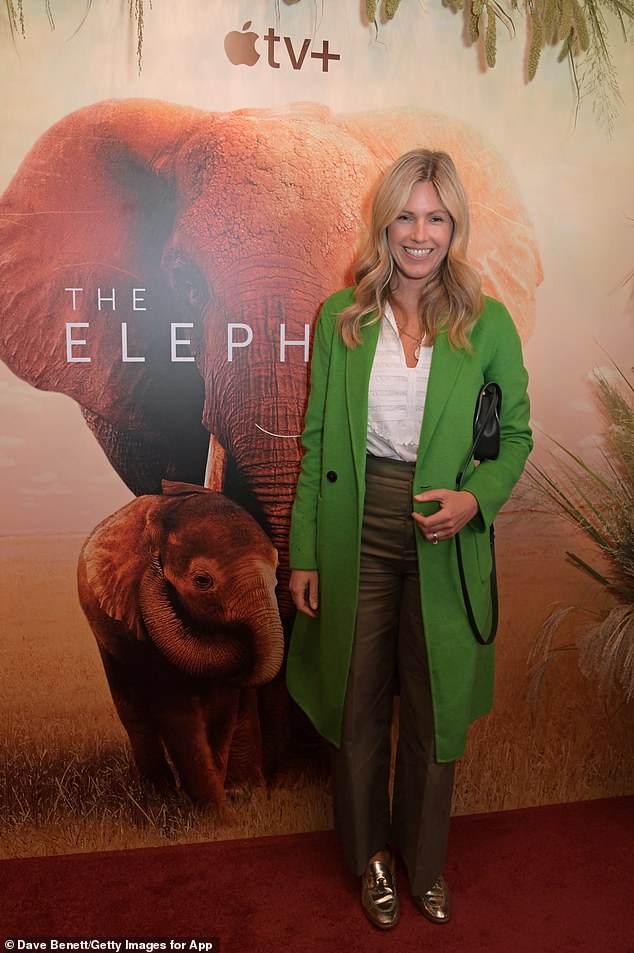 Engagement photos, taken by sister Princess Eugenie in the grounds of Windsor Great Park, showed Beatrice wearing a green floral £595 Zimmerman dress and showing off her 3.5 carat engagement ring by Shaun Leane, estimated to have cost £100,000, along with a £2,730 Cartier love bracelet.

Further black and white pictures taken by photographer Misan Harriman at Royal Lodge, Windsor Great Park show the pair cosying up to each other and giggling, and pulling playful faces.

Other guests at the event included Sir David Attenborough, who was seen  embracing Victoria Stone ahead of the film showing, and Thandie Newton.