When Jolie met Justin, and found a fawning Lara Croft fanboy: JAN MOIR listens as angelic Angelina descends from on high to be interviewed on Radio 4

And lo, she came among the people. Yea verily, even among the plain folks of radio-land with their rumpled shirts, early morning hair and coffee breath.

And she was gracious and she was kind in all things, even though she had by far the best cheekbones in the Today studio, quite possibly in the entire Corporation, especially if Jeremy Vine was on a day off.

But hush, for now her pillowy lips doth part as her sermon begins.

‘Let me say something to the British people and the British government,’ said Angelina Jolie, in the presidential manner of a supreme leader or perhaps a gold piano-owning queen, even though she is neither of these things. 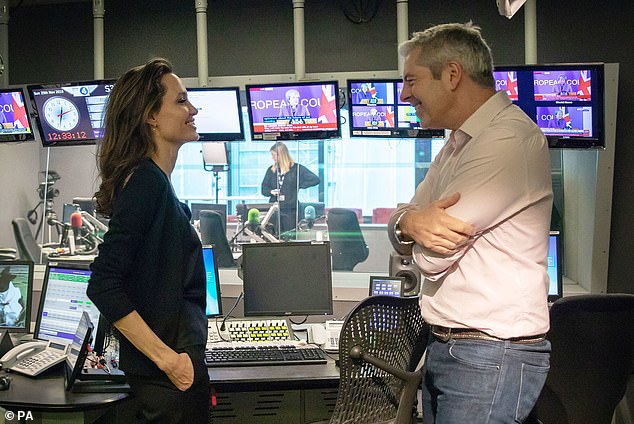 Yesterday morning she was something much more important; the guest editor on the Today programme. And from the opening pips onwards, she was dutifully hosed down with Beeb-treacle by the programme’s starstruck presenters.

‘She is an American actress, filmmaker and humanitarian,’ drum-rolled Mishal Husain. ‘She is a Hollywood A-lister who lived a life of wild abandon when she was young, but is now reinvented as an earth mother, fighter and campaigner,’ said an excited Justin Webb, thumping the timpani of flattery with both hammy fists.

Indeed, when interviewing Ange, it pains me to report that there were moments when Justin fawned like a Lara Croft fanboy. He would chuckle indulgently at her answers, in a manner he perhaps fondly imagined was sexy.

‘I ask that question,’ he gurgled at one point, ‘because I am genuinely interested’. Well, Justin, one would hope so. And not just in what Angelina was doing after the show. For her guest stint, the 43-year-old Oscar winner and special envoy for UN refugee agency the UNHCR wanted to focus on her Prevent Sexual Violence Initiative, which has received millions of pounds in funding from the UK government.

It wasn’t long before Jolie filled the Today airwaves with truly harrowing tales and first-person accounts of women and children being abused in war zones, from the Congo to Myanmar and Afghanistan.

‘I can’t even think of my own children in that context, it makes me feel ill,’ she told listeners. 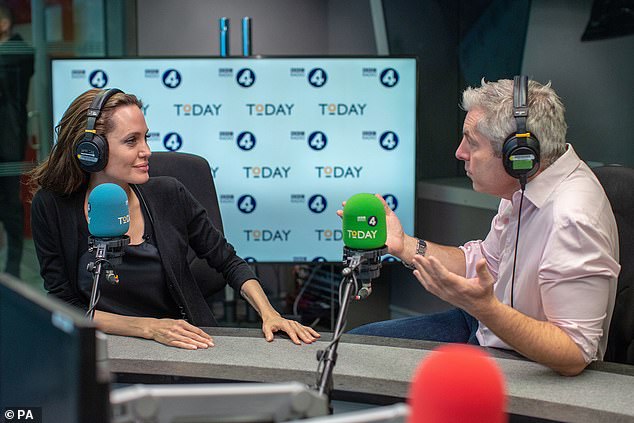 She was gracious and she was kind in all things, even though she had by far the best cheekbones in the Today studio, quite possibly in the entire Corporation, especially if Jeremy Vine was on a day off

Webb pointed out that in some dark and savage corners of the world where the laws and civilities of the West do not apply, crimes of sexual violence are almost the cultural norm. He cited the widespread abuse of women and children by Afghan forces as an example. Angelina replied that there should ‘never be a cultural norm in place that abuses women’ and that ‘maybe the fellow officers could be very, very clear’ about this.

Elsewhere, we learned that Angelina has ‘learned everything’ from her children.

Once listeners had recovered from this queasy revelation, they probably marvelled at the way she managed to talk about family life without mentioning the Brad word once. It’s as if her ex-husband, Brad Pitt, never existed, poor bloke.

However, never mind all that!

Justin was mustard keen to get back to his favourite topic: that wild abandon of her youth. ‘What drives you? You were pretty wild when you were young,’ he murmured, like a hopeful Tinder date who has just brushed the tiramisu crumbs off his tie and asked for the bill.

Angelina flirted right back, suggesting that the happily-married father-of-three had been wild in his youth, too.

‘Yes, but not anything like as wild as you and now I feel quite shamed about how unwild I was,’ he spluttered, perhaps forgetting that time he put a traffic cone on his head and forgot to take his copy of Chitty Chitty Bang Bang back to the library on time. Wild thing. You make my heart sing. When Justin Met Jolie? It was a magical radio moment, especially for him.