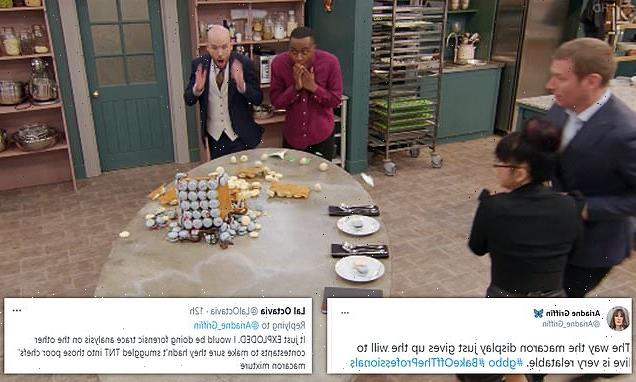 Moment delicate 70cm tower of 160 macarons crashes to the ground during Bake Off: The Professionals – leaving judges, presenters and viewers gobsmacked

Viewers of Bake Off: The Professionals were left shocked last night after watching a tower of macarons crash to the ground during the judging of the showpiece.

Pastry chefs from across the country were challenged to create a dessert in the shape of a cube and a macron tower to impress judges Benoit Blin and Cherish Finden on the Channel 4 programme.

But several of the teams struggled to construct their 70cm towers, which had to be made from 160 identical macarons in two different flavours, in the four hour time limit.

During one shocking moment, the tower constructed by chefs Sherrazade and Merryn, from Bristol, was completely destroyed after it crashed to the judging table under the weight of the macarons.

Many of those watching were left jumping out of their seats by the jaw-dropping scene, with one commenting: ‘It just EXPLODED.’ 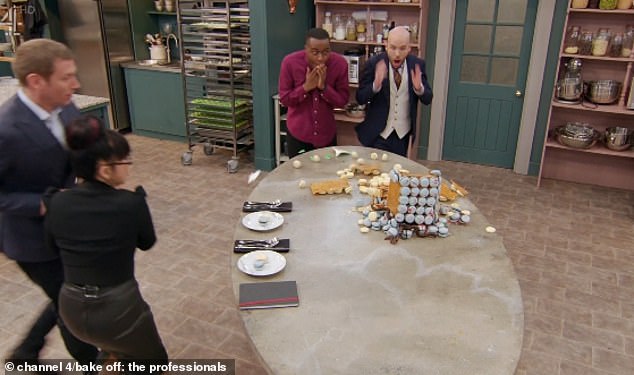 Viewers of Bake Off: The Professionals were left shocked last night after watching a tower of macarons crash to the ground during the judging of the final showpiece

They continued: ‘I would be doing forensic trace analysis on the other contestants to make sure they hadn’t smuggled TNT into those poor chefs’ macaron mixture.’

Another wrote: ‘The way the macaron display just gives up the will to live is very relatable.’

During the signature challenge, the teams were asked to make both a mushroom shaped dessert and a cube pudding.

And while pastry chefs Julien and Elise, from Brighton based Julien Plumart, won praise for their efforts, Sherrazade and Merryn, from The Bristol Loaf, struggled. 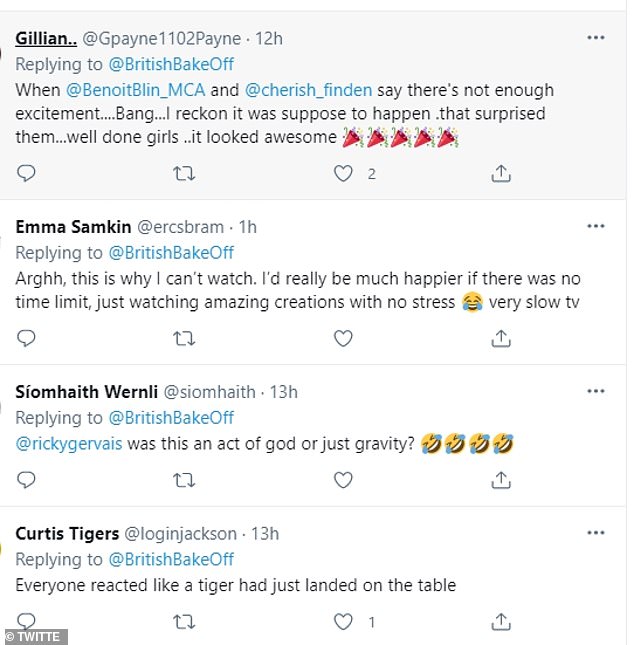 Many of those watching were left jumping out of their seats by the jawdropping moment, with some suggesting the tower had ‘exploded’

The judges questioned the team’s ‘messy’ presentation, with Benoit commenting: ‘There are some lovely things here but my problem is the mousse.

‘It’s very dense and there is not a lot of flavour to it.’

Meanwhile in the showpiece challenge, the chefs were asked to create an occasion showpiece – a 70cm tower crafted using macarons with the theme of good vs evil.

As well as looking visually impressive, the showpiece needed to bear the weight of 160 macarons. 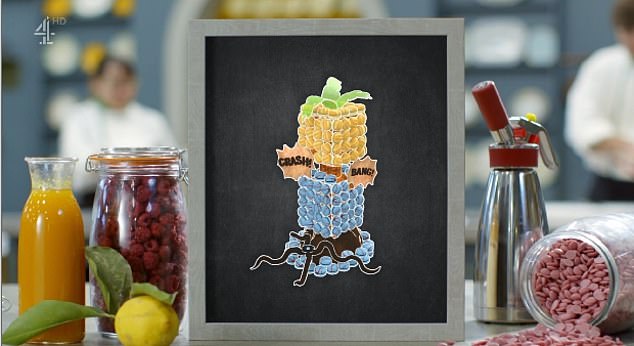 Bristol chefs Shez and Mez explained they planned to make one macaron flavoured with pineapple, vanilla and dark rum ganache, while the other would be cherry and liquorice

Benoit explained: ‘If it was just about the flavour that would be a challenge already.

‘But we are asking our chefs to stick our macarons up into a tower of goodness.

‘The chefs need to incorporate the theme of good vs evil. Hopefully it’ll give the opportunity to the chefs to have a bit of fun with it.’

Bristol chefs Shez and Mez explained they planned to make one macaron flavoured with pineapple, vanilla and dark rum, while the other would be cherry and liquorice.

And after a disappointing signature challenge, they hoped their sweet treats would be enough to pull them through to the next round. 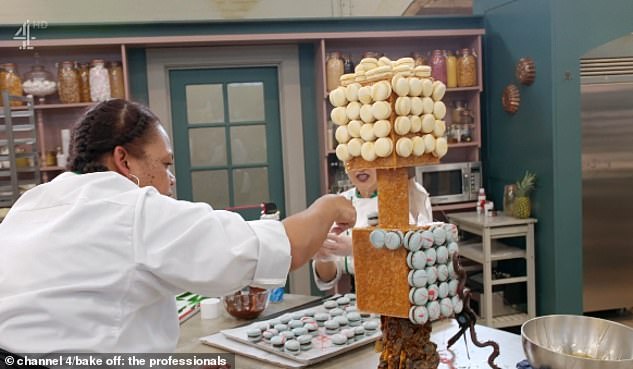 They planned to craft the tower using nougatine, saying: ‘We need positive vibes all around.’

But building the delicate tower tested the chef’s construction skills to the limit.

Shez and Mez set themselves the time consuming challenge of making their building blocks on the day and found they were struggling to get their work finished within the time frame.

The duo ended up presenting the unfinished tower to the judges but, before Benoit and Cherish could even touche the macarons, the entire structure dramatically fell apart.

As the judges leapt backwards from the table in shock, presenters Tom and Liam clasped their hands to their faces, gasping: ‘No!’ 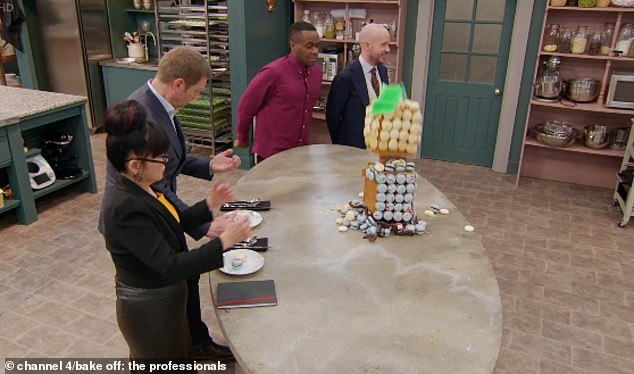 But moments before the judges could begin their assessment of the tower, the structure fell apart, with treats spilling onto the floor

Benoit said: ‘Good lord! I looked at it before it went down with a bang and I would say it was missing a lot to be really called a showpiece.

‘It’s not overly sweet but the pineapple flavour is not very strong there.’

Sadly, the mistakes meant the pair ended up being the latest team to be eliminated from the competition.

Viewers were shocked by the jaw-dropping moment, with one commenting: ‘Arghh, this is why I can’t watch. 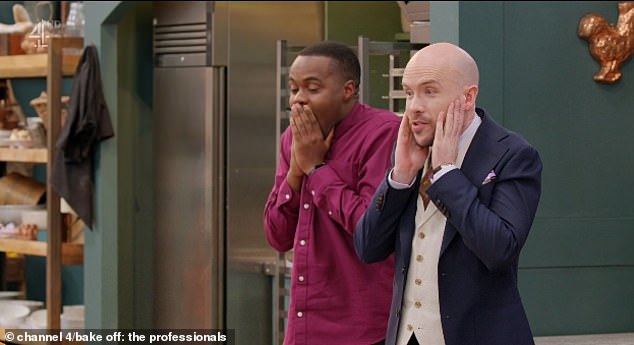 Presenters Liam and Tom were left gobsmacked by the moment, with both raising their hands to their face in horror 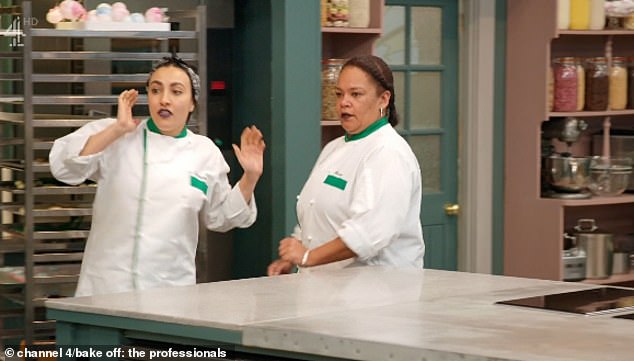 ‘I’d really be much happier if there was no time limit, just watching amazing creations with no stress. Very slow TV.’

Another wrote: ‘Everyone reacted like a tiger had just landed on the table.’

One added: ‘I will NEVER understand why the contestants on Bake Off they don’t assemble their showstopper on the presentation table.’

A fourth commented: ‘Omg bakeoff gives me proper anxiety when the chefs do their show pieces.

‘Will it fall, will it stay in one piece, will a piece fall  off? Argh!’