“Oh no, this was the worst case scenario,” says Pauly D.

The boys’ plan to reunite the women of “Jersey Shore Family Vacation” not only backfired big time, but ended in tears. Deena Nicole Cortese’s tears, to be specific.

In this exclusive sneak peek at Thursday’s new episode, Deena is upset to learn Angelina Pivarnick would be arriving inside the show’s quarantine bubble any minute — after specifically being told she would not be part of the trip.

“I feel like it’s almost like a hurricane about to come ashore,” Mike “The Situation” Sorrentino tells viewers. “I don’t know how she’s gonna take it, but obviously we gotta let her know the double booking has happened.”

After trying to butter her up with compliments, Mike finally tells her that Angelina’s arrival is imminent. “Are you guys kidding?” she asks.

“The whole day was so nice and now the boys drop this bomb on me,” says a shocked Cortese in a confessional. “This wasn’t even supposed to be a f–king thing and here I am, blindsided.”

“You told me yesterday she wasn’t coming! Especially being pregnant, I can’t put myself in a position where I’m going to see this girl,” she then yells at her costars. “It’s just not something I wanna do. I just wish you would respect how I’m feeling about it.” 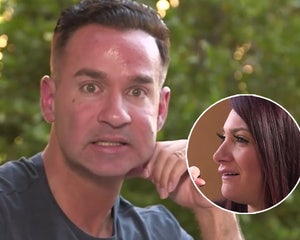 “I get you want us to get together and talk and all this shit, but I’m not doing it here. Especially when I’m super early pregnant,” she adds. “This is not something that I am ready to do.”

With that, she starts to break down in tears.

“Oh no, this was the worst case scenario,” Pauly D says to camera. “I did not want to see a pregnant woman cry.” 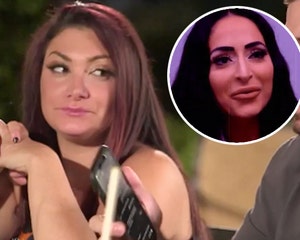 The guys hoped they could force a truce between Angelina, Deena and Jenni “JWoww” Farley following the wedding speech fallout by inviting them all to Las Vegas for a quarantine trip. The catch: the didn’t tell the women the other would be there.

After Jenni bailed for medical reasons, Deena told her cast members she was pregnant and was trying to avoid stressful situations — leaving the boys scrambling to fix the problem they created as Angelina made her way to Sin City.

At the end of the footage, the guys reveal their plan to cheer Deena up after breaking her down. To soften the blow, they invited her husband Chris Buckner and son CJ too — and show her footage of them on a plane heading to Nevada.

Will it work? See when Jersey Shore Family Vacation airs Thursdays on MTV.