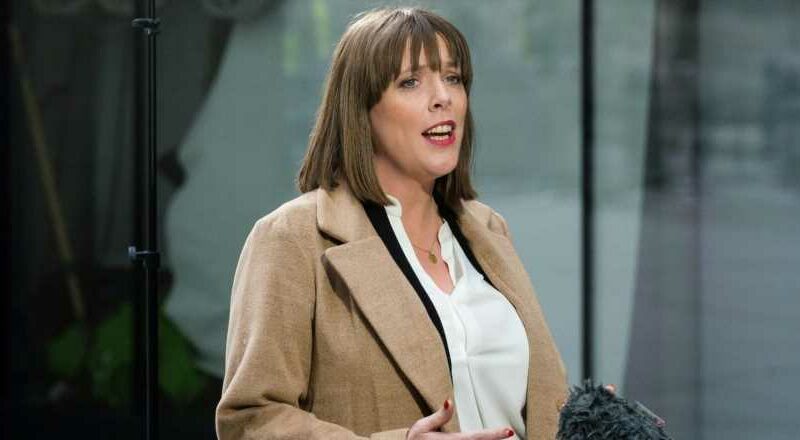 With the Home Office set to release its long-awaited strategy for tackling violence against women and girls this week, Jess Phillips MP discusses the urgent changes she wants to see – and why Stylist’s ambitious campaign for wholesale cultural shift needs to be at the heart of what comes next.

When Sarah Everard was snatched from the streets of Clapham and murdered by Metropolitan PC Wayne Couzens in March this year, the government reopened its public consultation into violence against women and girls. The response was seismic as thousands of us let out a collective howl of grief and rage at the brutal reality of being a woman in the UK today – where a woman is killed every three days at the hands of a man, 97% of us have been sexually harassed in public, and rape convictions stand at a record low.

This week, we will finally see whether the government’s claims to be in listening mode have translated into desperately needed action, as Home Secretary Priti Patel publishes her plans for keeping women and girls safe.

If the government wants to stop rape, it must invest in challenging rape myths

“This is a massive opportunity,” Jess Phillips, Labour’s shadow minister for domestic violence and safeguarding, tells Stylist. “But what we need is a fundamental shift.

“Violence against women and girls has to be a political priority for absolutely every department that it touches. I fear that we will see a few headline-grabbing policies when that is not what’s needed.”

Phillips is referring to the government’s proposals for CCTV, more street lighting and undercover police officers in nightclubs, which in the wake of Everard’s murder were condemned by charities and women’s organisations as “spectacularly missing the point”.

Jess Phillips MP with women’s rights campaigners in June, calling on the government to commit financial and political support to gender equality

Instead, Phillips wants to see a strategy that is bold, ambitious and doesn’t treat male violence against women and girls as an inevitable ‘fact of life’. In May this year, Stylist wrote an open letter to the Home Secretary, signed by more than 60 experts, activists, politicians and public figures, urging her to put prevention at the heart of her strategy for tackling male violence.

In the way that public health campaigns have changed our behaviour around smoking, drink driving and more recently Covid-19, we demanded that similar effort and funding go into challenging the sexist, misogynistic attitudes that underpin, encourage and tolerate male violence against women in our society.

We need a big, targeted public-health style campaign to tackle this

“Changing these attitudes is an enormous mountain to climb but you should never believe things can’t change,” says Phillips. “People climb big massive mountains all the time.

“We absolutely need a big, targeted public-health style campaign to tackle this,” she continues, citing the growing anguish over the scale of sexual harassment in our schools and universities. “We need better education at every stage of life on this issue and a fundamental rethinking of how women have to live on a daily basis.

The remembrance vigil for Sarah Everard on Clapham Common

Earlier this year, the Labour Party laid out its own green paper, detailing how they would tackle the epidemic-levels of violence against women in the UK. (The party is not the only organisation to describe the crisis in these terms: just last week, an interim report published by Her Majesty’s Inspectorate of Constabulary and Fire and Rescue Services, a politically neutral body, concluded that there is an “epidemic of offending against women and girls” in this country.)

Among Labour’s proposals were new minimum sentences for rape and stalking, an end to the barriers faced by refugee and migrant women, investment in the criminal justice system and a new ministerial post for rape and sexual violence survivors.

If you park in the wrong place, you get a ticket. But if you harass a woman in the street, nothing happens to you

In addition, Phillips wants to see the government robustly take on online and street harassment, arguing that the latter should be criminalised.

“If you park your car in the wrong place in a city centre, you get a ticket. Same with dropping a cigarette butt. But if you harass a woman in the street, nothing happens to you – it doesn’t make sense,” she says.

Jess Phillips’ third book, Everything You Really Need To Know About Politics: My Life as an MP, is out on 22 July

As we await the government’s action plan, Phillips says we should spare a thought for the people who deliver frontline services. They will be holding their breath, waiting to see if ministers have listened to their pleas for more longterm, secure funding so that they can give all survivors fleeing abuse the refuge, support and help they so desperately need.

“The reality is that if the strategy doesn’t come with resources – and let’s not forget that we are spending £283m on a boat that nobody wants [the controversial successor to the royal yacht Britannia] – these organisations will just have words and hot air to run on,” says Phillips. (Prime Minister Boris Johnson announced plans for the vessel earlier this year, with most reports putting its estimated cost at around £200m – but some experts believe it could end up costing up to £600m.)

A Fearless Future: how to email your local MP about challenging the attitudes behind male violence against women

But with the new strategy being unveiled just as parliament goes on recess, Phillips isn’t hopeful that we will see the ambitious plan we’ve been promised.

“My feeling is that they don’t want it to be particularly well scrutinised and that’s why they’re releasing it just as we break up for summer. But if that’s the case, then I will just have to use the platform I have outside parliament.”

Download the latest issue of Stylist from 5pm on 19 July to read our interview with Jess Phillips, where she opens up about imposter syndrome, anxiety and writing resignation letters in the middle of the night