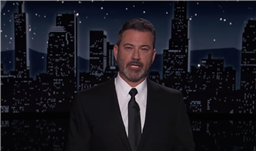 Jimmy Kimmel broke down in tears during a monologue on his ABC late night series in which he addressed the massacre at Robb Elementary in Uvalde, Texas. The school shooting left 21 people dead, including 19 kids. Kimmel opened the May 25 episode of “Jimmy Kimmel Live” without a studio audience and demanded Texas senators Ted Cruz and John Cornyn, as well as Gov. Greg Abbott, admit their state’s gun laws are not working and need to change.

“Once again we grieve for the little boys and girls,” Kimmel said while fighting  back tears. “Whose lives have been ended and whose families have been destroyed. While our leaders on the right, the Americans in congress and at Fox News and these other outlets warn us not to politicize this. They immediately criticize our president for even speaking about doing something to stop it. Because they don’t want to speak about it because they know what they’ve done and they know what they haven’t done. And they know it’s indefensible, so they’d rather sweep this under the rug.”

After the episode aired across the country, Kimmel was informed that his monologue was cut short on Dallas/Fort Worth’s ABC affiliate channel WFAA/Ch. 8. The late night host stopped short of accusing the channel of censoring him for criticizing the state’s lawmakers over gun control rights, but he did write on social media that he’d be looking into the incident.

“To my friends in Dallas who are asking: I do not know whether our ABC Network affiliate WFAA cut away from my monologue tonight intentionally or inadvertently but I will find out,” Kimmel wrote, also adding his full monologue to the post for those in Dallas who “didn’t get to see.”

According to the Fort Worth Star-Telegram: “Kimmel’s six-minute monologue was cut off by a string of commercials, beginning with an in-house WFAA/Ch. 8 news spot. The ABC affiliate played several more commercials before cutting back into the end of the monologue, which Kimmel used for a three-minute Everytown.org commercial. The gun violence prevention organization aims to enact ‘evidence-based solutions’ to curb gun violence.”

A source told the Star-Telegram that “the commercials aired and cut out part of the monologue because the 10pm newscast ran long. It wasn’t just the monologue that received off-kilter cuts to commercials. An interview with Seth MacFarlane was chopped up into mangled segments between spots.”

Peter Freedman, director of digital content at WFAA, responded to Kimmel on social media by explaining, “We’d made the decision earlier in the day to extend our 10 o’clock news to include extra Uvalde coverage in our broadcast, it had nothing to do with your monologue. We’re on the same team.”

Watch Kimmel’s full monologue in the video post below.