Home » Lifestyle » ‘Just give us some compassion’: Family plead for funeral exemption

A grieving Melbourne family say the five-week-old son of a young electrician who was killed on the job last week may miss his father's funeral after the government refused to allow just one extra person to attend.

Jarrod Fox, 37, was electrocuted at a work site in Melbourne's east and died last Tuesday, leaving behind his fiance Charmaine and sons Archer, 2, and five-week-old Jasper. 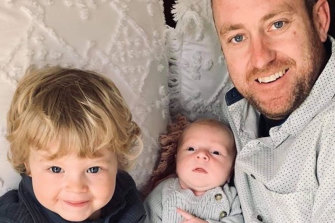 Mr Fox's mother Cheryl Fox made an emotional plea on 3AW after revealing the family's attempts to get an exemption to allow an 11th person to attend Friday's funeral were rejected.

She said her family were distraught that Jasper may not be able to go to his father’s funeral unless another close family member missed out.

"We have contacted Brett Sutton's office to ask for an exemption because [Jasper] is being breast fed and … we don't want to leave him out of his father's funeral and be babysat," Mrs Fox said.

"All we got back was a generic email that had a reference number on it, listing all the rules and said 'no'.

"Please I'm begging, can someone just give us some compassion."

Mr Fox had been working alone underneath a house when it's believed he was electrocuted on Tuesday afternoon.

Mrs Fox said her son's death had been both emotional and traumatic for his family with the likes of Treasurer Josh Frydenberg even reaching out to offer his condolences.

She said under the current COVID-19 restrictions, her family was not able to leave Jasper with a babysitter.

"If we could get any help, a little bit of leeway, it would make a world of difference to us," Mrs Fox said.

"We don't want [the cemetery or the funeral parlour] to get a fine for us trying to sneak Jasper in.

"We're trying to do the right thing."

His family wrote the 37-year-old was a gentle, kind and honest father, son and brother who lived and worked for his two young sons.