It’s Sunday afternoon in the picturesque French Quarter of New Orleans, deep into hurricane season, and the heavens have just opened. But inside the Hotel Maison de Ville, where Tennessee Williams once holed up to write A Streetcar Named Desire, I find the actor Kate Hudson, serene and impressively bone dry, having finished a morning of outdoor photos just as the daily downpour arrived.

“Welcome to New Orleans,” she cries. “This place is the best!” It’s testament to her positive outlook on life that she feels this; weeks earlier, production on her new film was shut down entirely as forecasters warned of the worst hurricane since Katrina in 2005 blowing in (Hurricane Barry was, ultimately, less severe than feared). 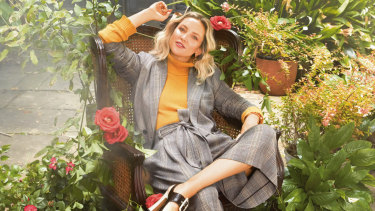 Kate, 40 (appearance, 25), has been in the colourful, intoxicating but storm-prone city for almost a month, filming the fantasy epic Mona Lisa and the Blood Moon – her first film project for two years. “Yesterday, I was lying on the floor in Bourbon Street, doing a fight scene, and I thought, ‘Yeah, I don’t know right now if I have missed making movies all that much,’ ” she says with a laugh.

“It’s hard. But I grew up on movie sets, and I don’t think I’ll ever stop making movies, whether in front or behind the camera. But it’s been nice to step away for a second and rediscover why I love it so much.”

The main reason for her recent filmmaking hiatus has been, simply: “Too many kids.” Last October, she gave birth to her daughter, Rani Rose, whose older brothers, Ryder and Bingham (aka Bing), are 15 and eight respectively. “Making a movie when you have kids is really challenging – the hours are crazy and the kids hate coming to set – but having three kids of such different ages makes it even more complicated,” she says, tucking her blonde bob behind one ear. “If I’m going to make a movie now, I have to schedule it so it works for my kids.”

Fortunately, as we speak, Ryder – whose father is Kate’s ex-husband, Chris Robinson of the Black Crowes, to whom she was married for six years until 2006 – is in summer school in LA, staying with his grandparents, Kate’s mother, Goldie Hawn, and her long-time partner, Kurt Russell. And Bing is in England for a week with his dad – her former fiancé Matt Bellamy of the band Muse, whom she dated for four years until 2014. Rani is asleep in an adjacent room.

Today, however, Kate is immersed not in the film, but in her side hustle, her clothing range Happy x Nature, the second collection of which has been launched online. She is sporting an item from the 35-piece collection: a vibrant green maxi dress with fitted sleeves and a parrot print, made from recycled plastic bottles. “I love fashion and I always have, but the more you get involved in it, the more you see how irresponsible the industry has been with waste. We’ve spent so long thinking that ‘more’ means more luxurious, when we need to start thinking that simplicity is more beautiful. It’s time to start being more responsible.”

The door to the sitting room opens, and Kate’s nanny enters with Rani, a grinning, gurgling vision in a melon-print dress. Kate kisses her and bounces her on her knee, and, without breaking her stride, tells me that Happy x Nature’s commitment to sustainability is all-encompassing: they’ve reduced the number of tags used, and clothes are mailed out in biodegradable packaging.

It’s not Kate’s first clothing venture; in 2013, she launched a line of workout wear, Fabletics. But Happy x Nature, she says, is her first foray into “real” fashion, “but the intention behind it is similar: how we can make a positive impact on our environment?”

Rani’s father is another musician, Danny Fujikawa, 33 – an old friend whom she first met 15 years ago while pregnant with Ryder, and with whom she has been in a relationship since late 2016. It was he who came up with the name for the brand. “He said, ‘That’s what people think you are, happy by nature,’ ” she says with a grin. “And I understand why people would associate me with that idea. The reality is that contentment is a discipline. Happiness is something we cultivate. But I like the idea that nature can make us happy and bring us joy. It works on lots of levels.”

Rani, meanwhile, is seeking contentment in her mother’s beaker of iced tea, grabbing cheerfully and repeatedly at the straw. “When she wants something, she really wants it,” notes a beaming Kate. “It’s the Hawn lineage. Very demanding.”

Born into Hollywood royalty, Kate is the daughter of Academy Award-winning actor Goldie Hawn and the musician Bill Hudson. The couple separated when she was 18 months old, and she and her older brother, Oliver, were raised by their mother and actor Kurt Russell, spending school holidays on the set of films such as the pair’s classic 1987 rom-com Overboard. “To us, it was just Mom and Dad at work; it was normal,” she has said.

She recalls coveting her mother’s clothes, even as a small child. “My mom wore so much Alaïa – all bodycon, very 1980s – and stonewashed jeans and tank tops. She was so hot,” she sighs, proudly.

"She didn’t shop a lot for us kids. She went to Paris for work one time and brought me back a dress: pink, by Dior, and it spun, like a ballerina’s dress. I wore that thing until it was falling off me! She never dressed us or told us what to wear; if we wanted to put on an orange hat and cowboy boots and a puppy-print vest and a miniskirt, she’d be like, ‘Okay.’ ”

It’s an attitude Kate has adopted with her own children. “Bing loves a sharp suit; it must be the Englishman in him,” she says with a chuckle. “It’s important to let them experiment; it’s how you discover who you are. It’s a part of how you see yourself, who you feel like being that day, the character you want to play."

“When I started acting 20 years ago, we didn’t have stylists. A lot of the clothes you see me wearing in the Almost Famous era were mine. For its premiere at the Toronto Film Festival, I wore a Voyage dress that I bought in London. It meant you really established your own sense of who you were and what you wanted to put out there.”

Kate first took to the stage at LA’s Santa Monica Playhouse aged 11, before scoring small, supporting roles in films such as 200 Cigarettes and Gossip during her teens. But it was 2000’s Almost Famous, Cameron Crowe’s semi-autobiographical story of a teenage journalist writing for Rolling Stone in the 1970s, that really launched her career. As the young groupie Penny Lane, Kate earned a Golden Globe for Best Supporting Actress, establishing her as a bona-fide star at 21.

A series of romantic-comedy roles followed, including some of her best-known hits: How to Lose a Guy in 10 Days, with Matthew McConaughey, and You, Me and Dupree, with her then on-off boyfriend, Owen Wilson. Her role in Mona Lisa and the Blood Moon is a major departure. “She’s a stripper, she’s a single mother and she’s crazy – in a great way. It’s a very different character to any I have played before.”

The door opens again, this time to an assistant bearing an enormous platter of crudités: celery sticks, carrot batons and cucumber chunks. Kate begins hungrily and noisily munching on them. 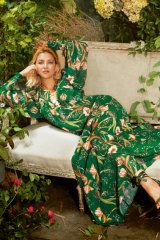 ‘Making a movie when you have kids is really challenging – the hours are crazy and the kids hate coming to set – but having three kids of such different ages makes it even more complicated.’Credit:Alexi Lubomirski

“My hairdresser offered me a breakfast bar this morning, and I wondered how many points it was.
I looked it up – 10!” she gasps. “I only get 23 points a day. I was like, ‘Okay, am I going to eat this? Or am I going to get some carrot sticks?’

A global brand ambassador for WW – formerly known as Weight Watchers – Kate clearly walks the walk when it comes to the company’s regimen. But there was some pushback when her appointment was announced late last year; Kate has never struggled with her weight and, even after gaining
32 kilograms in her first pregnancy, quickly lost 27 kilograms of it in the three months after giving birth.

“People always associate WW with weight loss, but when the new CEO of the company came to me, she wanted to talk about how they were shifting the dialogue into being more about wellness,” says Kate. “It’s about understanding your food and maintaining a healthy lifestyle, being part of a community, and having support. They have great recipes developed by amazing chefs.”

For Kate, it’s not about losing weight but maintaining it, and making informed choices about her food. “I’ve always been a very healthy eater and I’m very knowledgeable about nutrition, but I use the app to look things up that I’m not sure about all the time.”

Which is not to say that she’s into deprivation of any sort. Shortly after the crudités arrive, an assistant brings in a plate of lunch for her: caesar salad with prawns, rice and beef short rib. Kate enthusiastically tucks in.

Weight gain notwithstanding, “I love having babies. I love being pregnant,” she says. Would she have more, then? “I’ll have to think about it,” she says, grinning. “I don’t know yet. But maybe.”

Would she get married again? “Probably, I think so,” she nods. “We think about that a lot. Marriage is definitely not a golden ticket; it’s not going to solve any challenges in a relationship. But as someone who’s lived through … well, trial and error, I think that the symbolism of marriage, that commitment, is more important to kids than we sometimes think.”

Growing up, though, her mother and Kurt never married. “Kurt made it very clear we were a unit from when we were very young. The trust I got from him in terms of his dependability was priceless for me,” she has said. And Kate has gone on to navigate her own blended family with grace.

“It’s all about my kids,” she says, shrugging. “Which means I have to love their fathers, no matter what. So I put my ego aside, I put aside any challenges that didn’t allow those relationships to last, and I love them; it doesn’t mean I have to be with them. And I think my kids feel that we’re all on the same page.”

She shrugs again and, briefly, looks baffled. “I don’t know how I’ve pulled that off! We’re all going to die one day, so I try to look at life with that in mind. Am I being honest with myself? Am I being truthful? Does it matter what other people think?” She sucks hard on her iced tea. “No, at the end of the day, it doesn’t. It really doesn’t matter what anybody else thinks.”

This article appears in Sunday Life magazine within the Sun-Herald and the Sunday Age on sale October 13.