Mom’s little helper! Kate Hudson baked a batch of mini peach pies on Wednesday, August 12, and had some assistance from her daughter, Rani, in the kitchen.

LOL! Kate Hudson Jokes Her Daughter Rani’s Goggles Are ‘All the Rage’

“Do you want to make peach pies with mommy?” the 41-year-old Something Borrowed star asked her 22-month-old daughter as she shared video of the duo’s cooking process on her Instagram Stories.

“Mini peach pies,” Hudson said as she looked over the recipe with Rani in her arms. “Does it look yummy?” 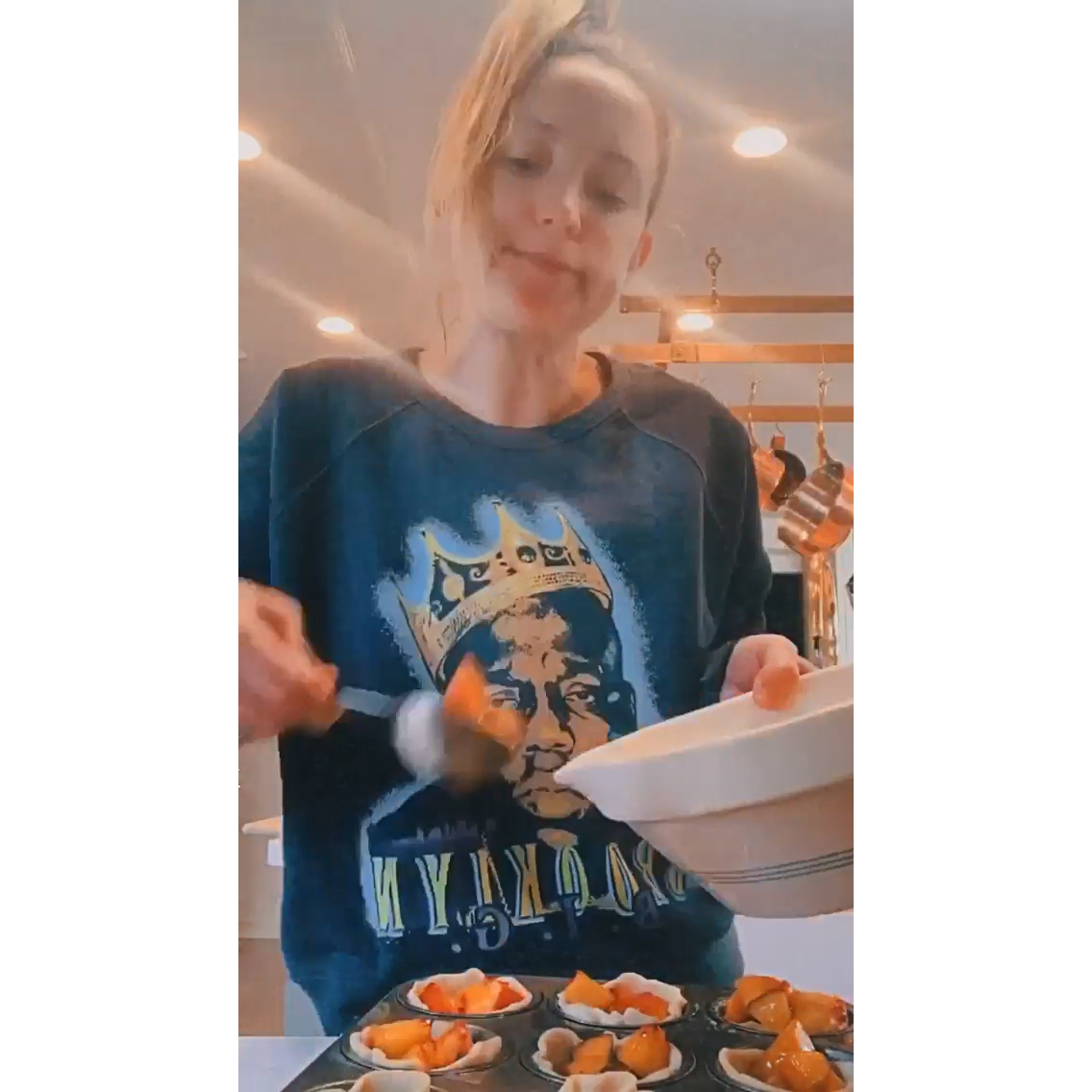 According to the California native, she got the recipe from WW (formerly Weight Watchers) since she is currently a spokesperson for the company. “Peaches are in season and they’re so yummy right now, I’m sure everybody knows,” she explained.

“I’m going to do it WW, I’m going to try one of these mini peach pies. They’re five points a pie,” Hudson added, referring to the popular diet plan, which has helped her shed some weight following her third pregnancy. “Let’s do this. [It’s] easy.”

The Glee alum then preheated her oven and gathered the ingredients for the filling — peaches, sugar, ginger, cornstarch and salt — and got to work slicing the fruit. “Look at these beautiful, ripe, gorgeous peaches,” she declared as she held two peaches up to the camera. “It’s so good.”

After preparing the filling, the How to Lose a Guy in 10 Days star admitted she was “cheating” by using frozen pie crusts instead of making one from scratch. “I don’t usually cheat but I do always have these in my fridge because I like to make pies and my kids like the pies that I make.” (In addition to Rani, whom Hudson shares with boyfriend Danny Fujikawa, Hudson also shares sons Ryder, 16, and Bingham, 9, with ex-husband, Chris Robinson, and ex-boyfriend, Matt Bellamy, respectively.)

“Sometimes if they want a quick [pie,] I cheat,” Hudson added while holding up a box of frozen pie crusts. “And yes, Pillsbury crusts are about as great as it gets.”

Once the peach filling was evenly distributed in each of the pies, the “Sibling Revelry” podcast cohost baked the pies. She then waited for them to cool before putting each one in an individual ramekin.

Though Rani was MIA for much of the cooking process, the adorable toddler didn’t forget about the homemade dessert. “Pies!” she said as she ran into the kitchen with her hands in the air. 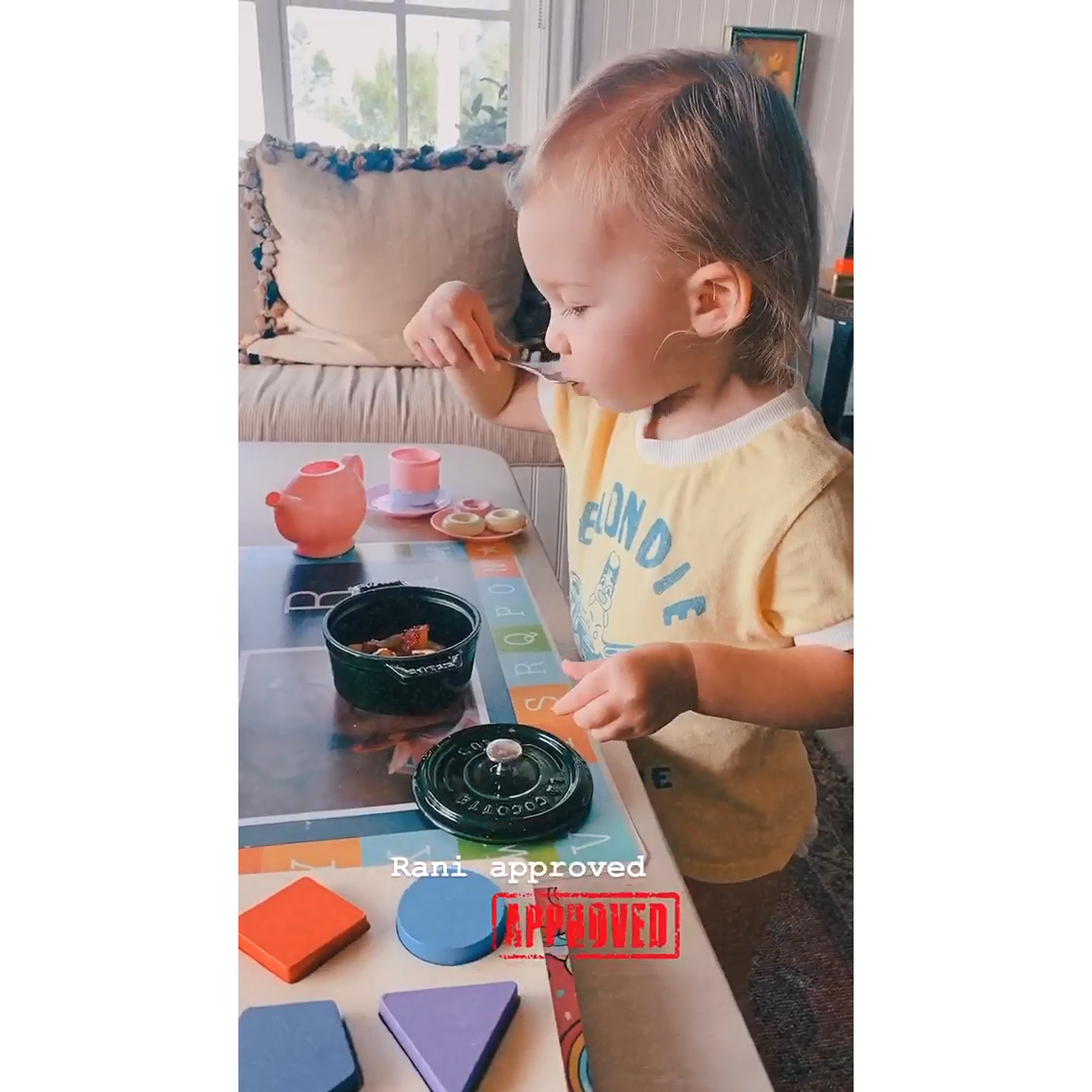 Upon taking a taste of her own personal pie, Hudson’s “taste-tester” said the treats were “good.”

The little one previously acted as her mom’s taste-tester last month, when she sampled a fruit smoothie for Hudson’s new health and wellness brand, In Bloom.

“I’ve created, with the most amazing team, a body nutrition company. It will support whatever you’re going through — your dailies and also anything else to assist certain things in your life, whether it be your sleep patterns or your cognitive function,” the Fool’s Gold star explained via a series of Instagram Stories in July. “I was supposed to launch this in 2021. I pushed it forward because I just felt now more than ever I wanted to be able to talk with you guys about health. I wanted to share with you the things that I’ve learned.”