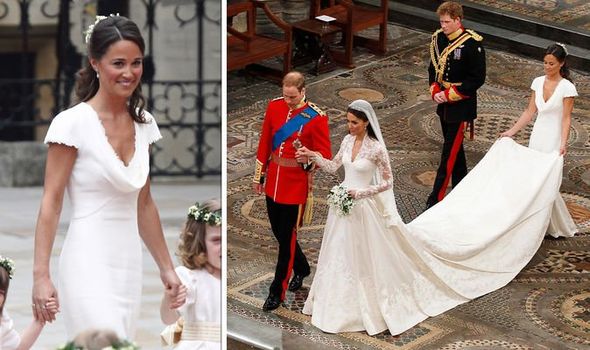 The Duchess of Cambridge broke the tradition at least five times during her wedding with choices that didn’t adhere to the royal protocol.

One of the rules Kate Middleton broke had to do with her hairstyle.

The Duchess of Cambridge decided to wear her hair down for the wedding day, which is something that hadn’t been done in over 350 years.

Despite many members of the Royal Family trying to persuade her to wear her hair up, she decided otherwise.

Royal expert Ashley Pearson said in the documentary William & Kate: The Journey: “Royal sources tell me that the royals indicated very strongly to Kate that they would prefer her to wear her hair up for this very special occasion.

“However, Kate had her heart set on wearing her hair down with long flowing curls, which is her favourite way to wear it, and actually William’s favourite as well.

“They ended up compromising on her look.”

Kate also chose to do her own makeup as she wanted to look natural while walking down the aisle.

However, one of the most surprising things Kate decided to do, and a very unusual thing even for non-royal weddings, had to do with her sister Pippa.

The Duchess of Cambridge chose a Sarah Burton dress for her sister Pippa Middleton, which looked very similar to her own wedding gown.

Pippa was in fact matching Kate wearing a white gown which featured a lace on the neckline and buttons down the back.

According to royal tradition, the bridesmaids are not supposed to wear white, since they could be confused with the bride.

The Duke and Duchess of Cambridge also chose Pippa Middleton and Prince Harry as Maid of Honour and Best Man.

It was the first ceremony which had Maid of Honour and Best Man as they are two roles that don’t exist in royal weddings.

Another rule the couple decided to ignore had to do with their wedding night.

Royal couples traditionally go on their honeymoon straight after the wedding.

The Duke and Duchess of Cambridge, however, decided to do it differently.

The couple decided to stay at Buckingham Palace and have a quiet night instead of jetting off on their honeymoon.

Seychelles was the destination chosen by the Duke and Duchess of Cambridge.

They flew to the idyllic islands 10 days after the wedding and stayed on a private island with breathtaking views of the Indian ocean.