Kate’s plum job! Duchess of Cambridge recycles £2,700 Oscar de la Renta suit as she visits the costume department of the Royal Opera House during her busy first week back at work

It’s meant to be one of the quieter months in the royal calendar. But today three duchesses are on duty, including a very glamorous Kate who was the first to step out this morning.

The Duchess of Cambridge looked typically chic in a recycled Oscar de la Renta suit as she kicked off a total of five visits by senior royal women on Wednesday, arriving at the Royal Opera House in London this morning.

Later Meghan will visit the Mayhew animal shelter in north London, followed by a trip to a charity performance of Cirque du Soleil with her husband, Prince Harry, at the Royal Albert Hall this evening. And in Scotland Camilla will undertake two engagements at the University of Aberdeen in her role as chancellor.

The day of duty starts with Kate, 37, at the Costume Department of The Royal Opera House to learn more about their use of textiles, commissioning of fabrics and supply chain.

She wore a stylish peplum two-piece by Oscar de la Renta costing £2,736 that she was last spotted wearing for a mental health conference in February 2017.

Keeping out the January chill Kate ditched her normally nude stockings for a pair of black opaque tights and appeared to have invested in a new pair of heels.

The mother-of-three who is well known for recycling her footwear, in particular a pair of Gianvito Rossi nude pumps, she pipped for a pair of black stilettos with a gold buckle detailing by Rupert Sanderson today. 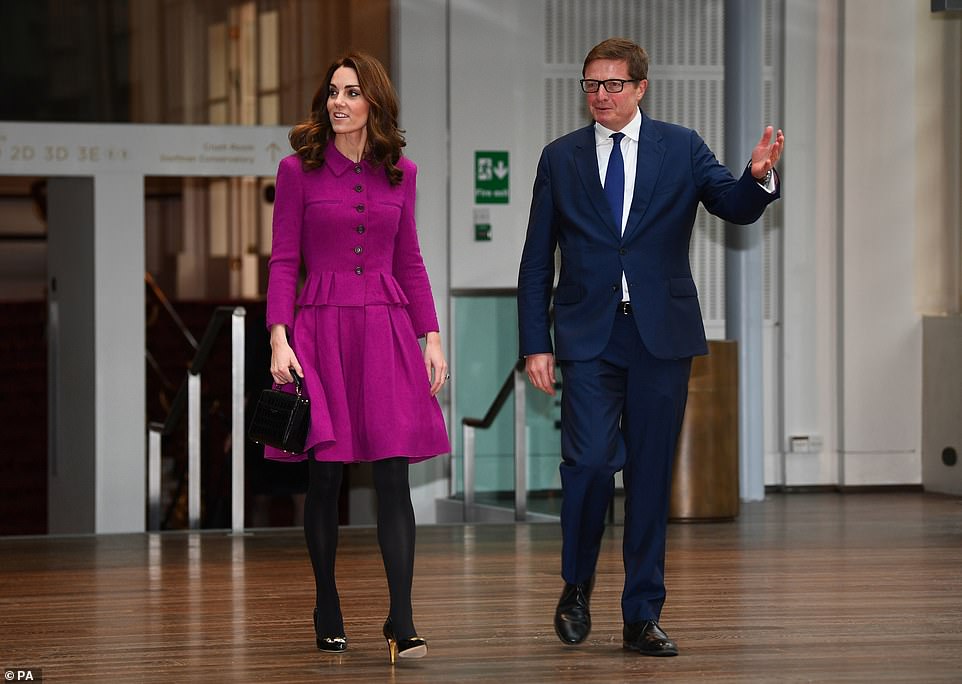 The visit will allow Her Royal Highness to find out more about the scale of the department’s work and how different textiles influence various costumes.

The textile and manufacturing industry is of enormous interest to Kate as her paternal great-great-grandfather, Francis Martineau Lupton, was a mill owner who ran the family’s successful textile manufacturing business, William Lupton & Company, with his three brothers.

The Royal Opera House Costume Department is responsible for creating, refurbishing and conserving thousands of opera and ballet costumes per season, with up to 600 costumes per production.

Up to 10,000 costumes are used each year by artists from The Royal Ballet and The Royal Opera House. The department has built up a historic costume collection of more than 5,000 items, including some dating back to 1861.

Many of the costumes are used time and time again thanks to good maintenance and repair. 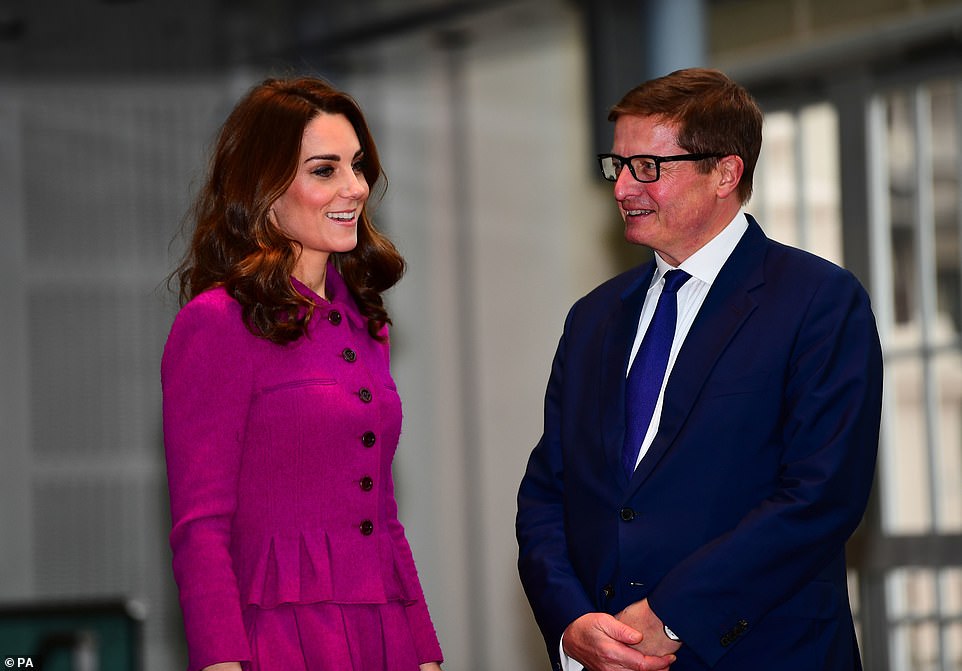 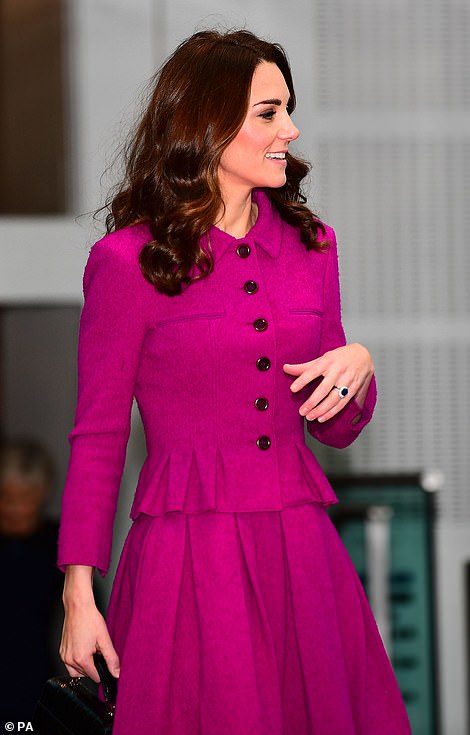 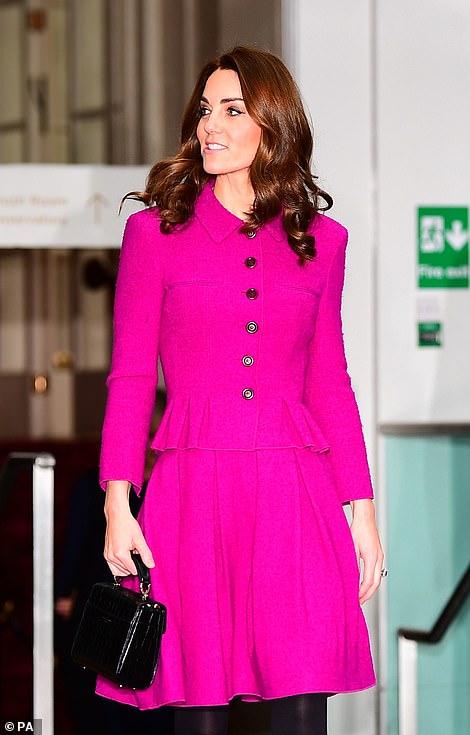 The Duchess, who is performing her second engagement of the week, could be seen carrying a small black handbag costing £495 by Aspinal of London 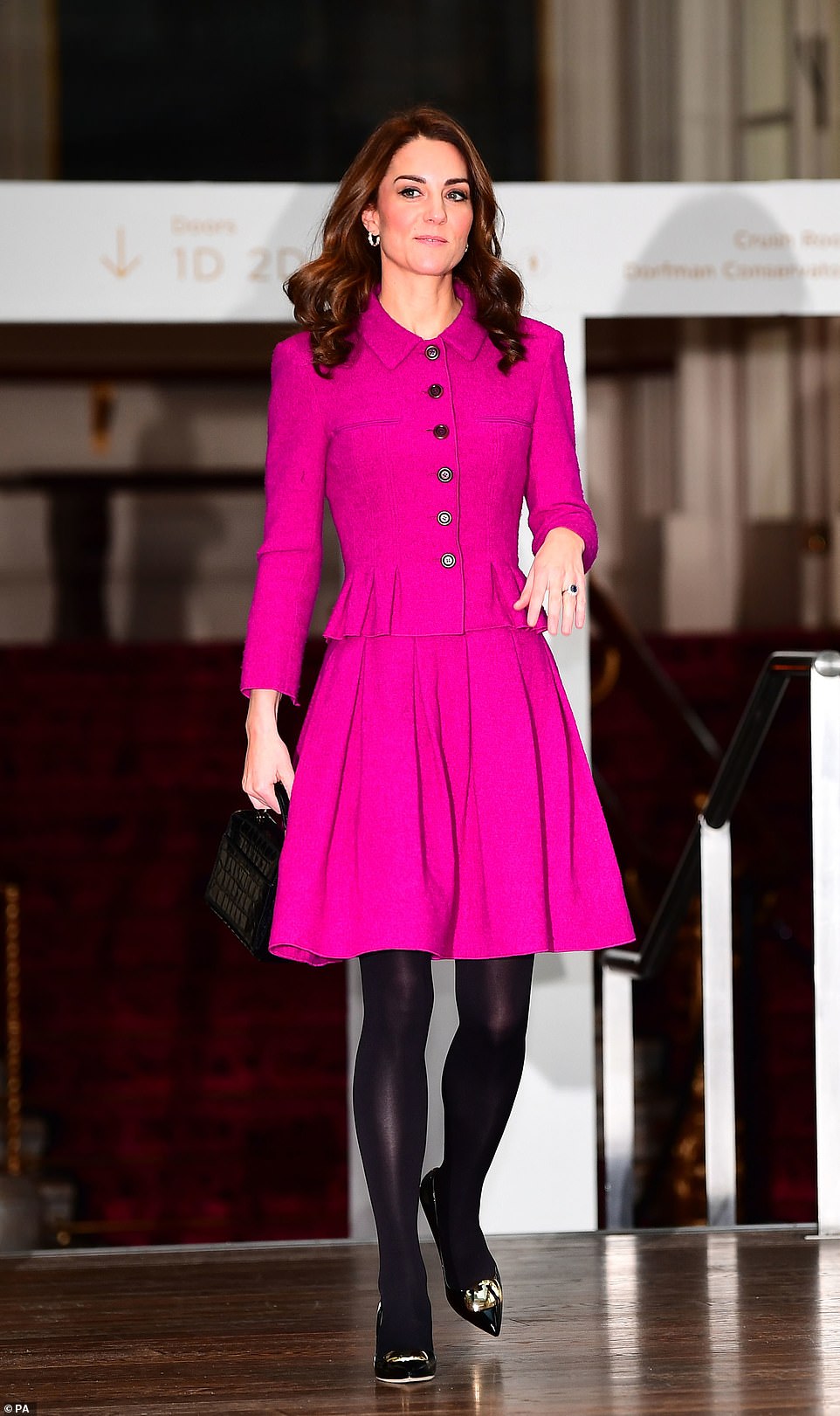 Kate wore a stylish peplum two-piece by Oscar de la Renta costing £2,736 that she was last spotted wearing for a mental health conference in February 2017

It takes the entire revival workroom around 1,500 hours to refurbish the costumes.

During her visit to the Costume Department, Her Royal Highness will visit the pattern room where she will be shown the process of working and creating costumes for a new production with designers, including sourcing fabrics and samples.

She will then visit the dye shop where staff will showcase different techniques including dyeing, hand-painting, staining garments and digital printing which allows the team to reproduce historic fabrics no longer available.

Before departing, the Duchess will meet with Royal Ballet Principal Dancers Lauren Cuthbertson, Laura Morera and Vadim Muntagirov who will explain how various factors such as lighting, interaction and movement influence the designs of their costumes.

She will watch the dancers rehearsing the romantic Ballet The Two Pigeons.

This is Kate’s second engagement of 2019 having returned to work on Monday with a visit to a community garden in Islington.

She joined schoolchildren at King Henry’s Walk Garden in North London to see how the project brings people together through gardening and food growing.

The garden has been run for more than a decade by community volunteers with support from Islington Council.

It contains allotments and a ‘from plot to plate’ area for children, which enables them to grow ingredients to put on their own pizzas.