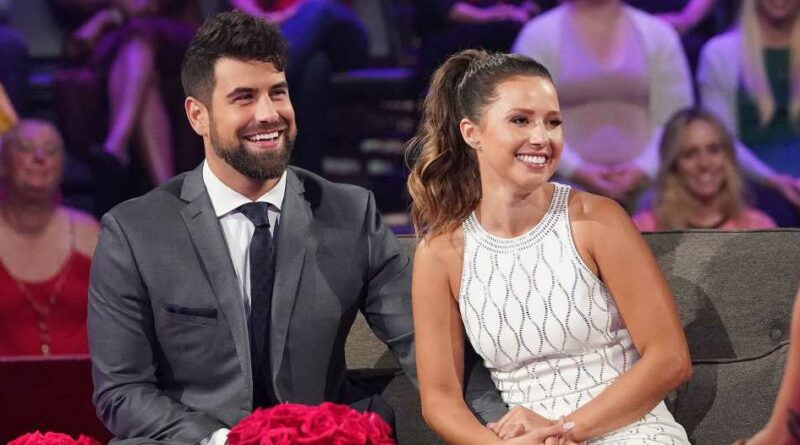 Katie Thurston and Blake Moynes are ready for the next step, but do they have Aunt Lindsey’s approval? The Bachelorette season 17 couple reflected on their tense meeting with her family during an exclusive interview with Us Weekly.

6 Things to Know About Blake Moynes

“I can laugh at it now. … It was a very intimidating moment. It was hard to navigate it,” Blake, 31, exclusively told Us about Katie’s aunt, who made waves on social media during the finale. “I’m excited to see her, and, you know, have a drink and talk and laugh about it. She just wanted the best for Katie. And so, she went about that in her own way, and she didn’t get the answer she wanted clearly, but hopefully, we’re OK now moving forward.”

The 30-year-old former banking marketing manager added that if Blake “wasn’t going to be able to survive Aunt Lindsey, he was not going to fit with my family.”

“Not that she’s always like that, but she’s the hardest part of it,” Katie continued. “And if he could get through that, he can get through the rest of my family.”

After their proposal aired on the Monday, August 9, finale of The Bachelorette, Katie revealed on After the Final Rose that she didn’t tell her mother or family members that she got engaged on the show.

“Yes, they did find out as it was airing and I’ve already received texts,” she told Us. “Everyone’s very supportive and excited and they can’t wait to meet him. And I just know he’s going to fit in seamlessly.”

Katie has since shared screenshots via Twitter of her family group chat, in which Lindsey texted, “I legit feel like I owe this kid an apology. Did I f—k him up so bad you had to take him to an energy healer.”

A family member named Sam replied, “He handled you and still liked Katie afterwards, that’s good. Lol, don’t apologize for being yours. You asked serious questions that needed to be asked. Plus, out of all the guys he seemed like the one who could handle our family.”

During the couple’s chat with Us, Katie concluded that she has no regrets from the show or her tense confrontation with Greg Grippo at After the Final Rose.

“I know there are some hot topics that came from episodes, but really the whole season was just about being honest and raw and having real conversations. And I think that’s what each and every episode brought on its own topic,” Katie told Us. “So overall I feel great about how my journey wrapped up.”

Greg Admits He Acted ‘Like an Ass,’ Reveals Regrets About Katie

For now, the pair are spending time in Canada with Blake’s family but aren’t ready “to plant roots somewhere” because they have the “luxury” to “hop around” and figure out where they want to live, Katie explained.

“We need to see each other’s lifestyles and our passions, our interests, and then try to see where our anchor spot will be, where all those things can kind of align and make sense for both of us,” Blake added. “We’re going to jump around for a bit and experience what works best for us.”