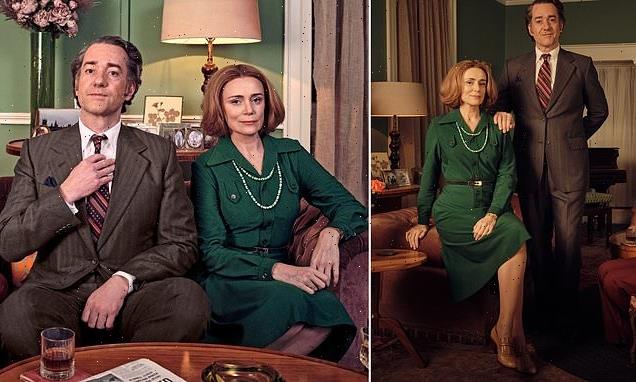 Matthew Macfadyen and his wife Keeley Hawes are Britain’s most in-demand TV power couple. Pride & Prejudice and Ripper Street star Matthew has recently been catapulted to global fame thanks to the smash US drama Succession, while Keeley, star of Bodyguard, The Durrells and Crossfire, is one of our most sought-after leading ladies.

But the couple have barely worked together since they famously fell in love on the set of BBC1 spy drama Spooks 20 years ago, so it’s a rare treat to see the pair acting together in new drama Stonehouse. Based on the stranger-than-fiction true story of Labour MP John Stonehouse, who faked his own death in 1974 in a bid to avoid financial and personal humiliation, the three-part series comes to ITV this week.

In a wig, sideburns and fake teeth, Matthew stars as the charismatic MP whose vanity and errors of judgement led him to infamy. Keeley plays Barbara, a model politician’s wife blindsided by her husband’s faked suicide. ‘Working with Matthew was delightful!’ says Keeley, 46. ‘We’d talked about doing something together again, and this was perfect.’

They shared a cosy time in an Airbnb while filming near Birmingham, even taking their dog along. ‘It was probably stranger for people around us on set, knowing we’re married and how that might work,’ says Keeley. ‘For us, it was just really normal. Having worked together before we knew it would be OK. We’d drive in together, then his fake teeth would go in, we’d do the scenes and then have lunch. It was a lovely experience.’ 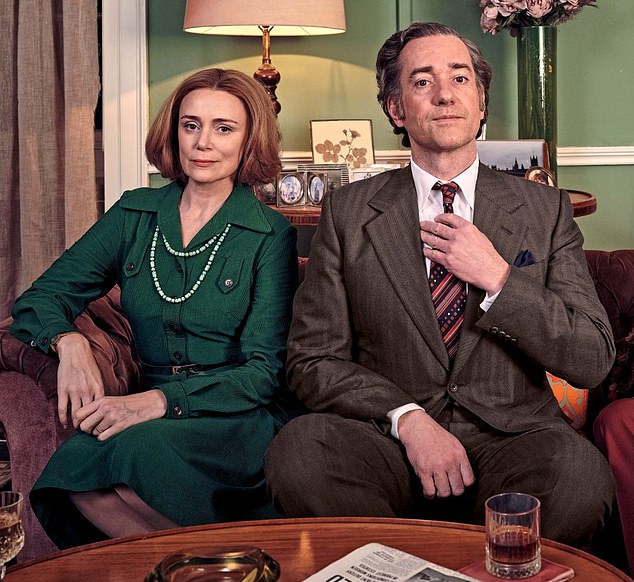 Stonehouse’s bizarre story is told with a light touch, in the same style as 2018’s A Very English Scandal about MP Jeremy Thorpe, starring Hugh Grant. The similarity is unsurprising, given that writer John Preston is pivotal to both. A Very English Scandal was based on his 2016 non-fiction book, adapted for the screen by Russell T Davies, while Stonehouse is John’s first script for TV and has the same jaunty approach.

John turned to Davies’s Scandal scripts to help him write Stonehouse. ‘The opportunity came up to do Stonehouse as a TV series, not as a book,’ he says. ‘For me that was a very attractive idea because I’d never written a script before. I had Russell’s scripts for A Very English Scandal at home so I could look at them and think, “Oh, so that’s how he did it.” So it actually did teach me a lot.’

And the fantastical tale suits the breezy tone perfectly. A rising star in the Labour government led by Harold Wilson (Kevin R McNally), junior minister Stonehouse was tipped as a future PM. But outside politics his businesses were deeply in debt, and possibly as early as 1959 he’d begun spying for Czechoslovakia to make money. Married with three children, he also began an extra-marital affair with his secretary Sheila Buckley (Showtrial’s Emer Heatley).

His life unravelling, Stonehouse stole the identity of a deceased constituent and in November 1974 faked his death in Miami and travelled to Australia to begin a new life with Buckley. He didn’t get away with it, as the new drama reveals.

It’s such a bizarre tale, says Matthew, that their own son could barely believe it. ‘I was telling our 16-year-old and he was like, “What, really? That’s not true!”’ laughs Matthew, 48, who has Maggie, 18, and Ralph, 16, with Keeley. She has another son, Myles, 22, from her first marriage.

‘He is ludicrous, but there’s something sympathetic about him,’ adds Matthew. ‘He was very personable, by all accounts, funny and charismatic. But he wasn’t without vanity, and he liked the trappings of his position. He was great fun to play.’ 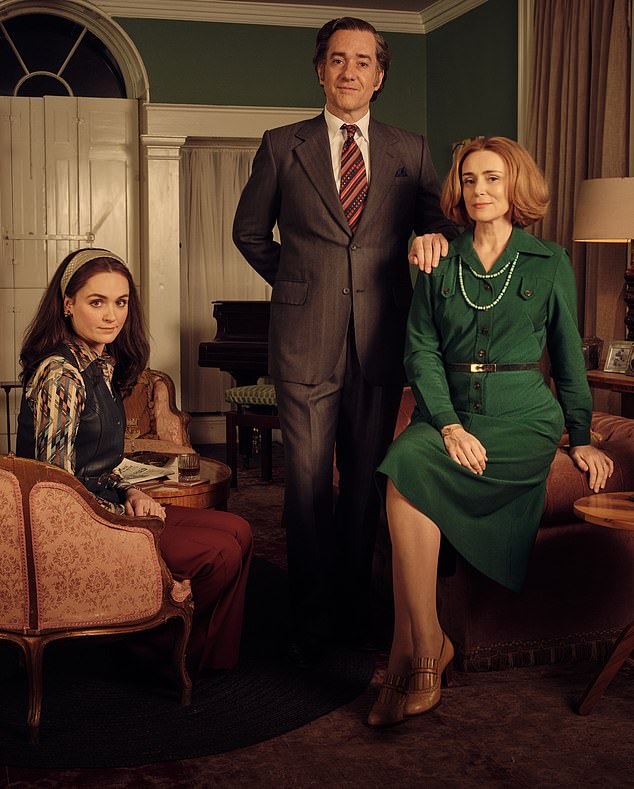 Mired in financial and romantic difficulties, with suspicions about his loyalty circulating in Westminster, Stonehouse made his fateful decision. ‘I think it just became too much,’ says Matthew. ‘I played it as if he was on the verge of a nervous breakdown. There’s an extraordinary scene where he says goodbye to his wife and children and leaves for a business trip to Miami with them not knowing this was meant to be a final farewell. Once you start thinking about it, it’s unimaginable. Very difficult to do. I found it quite moving.’

There are echoes of Matthew’s Emmy-winning turn as Tom Wambsgans in Succession: Stonehouse and Wambsgans are both way out of their depth. ‘There was a bit of mining of Tom going on when it came to playing Stonehouse,’ admits Matthew. ‘Both like being near power – and both are grotesques.’

Another towering performance comes from Pirates Of The Caribbean’s Kevin R McNally, who says he felt pressure to get Harold Wilson just right because viewers will still remember the PM who served from 1964-70 and 1974-76. ‘If you’re playing Disraeli, you go for the historical spirit because nobody alive has met him,’ reasons Kevin, 66. ‘But with Harold Wilson I didn’t feel I could get away with it being a little bit like him. I felt I had to do as much as I could to inhabit him completely.

‘At school, I used to amuse my classmates by impersonating him. I felt that was useful because I wanted to be as much like him as possible, as a tribute to my generation.’

As for the long-suffering Barbara, Keeley came to admire her resilience. ‘She was an intelligent woman who was ambitious for her husband. It was a male-dominated world. As an MP’s wife, she was used to a certain amount of press. This was nothing compared to the furore after John went missing and then was found. It was a huge story. It must have been horrendous, humiliating and deeply upsetting. Their dirty linen aired in the papers. She was very strong and brave.’

For budgetary reasons, the faked death was shot in Malaga, Spain, during unusually bad weather. ‘Awful storms,’ Matthew recalls. ‘The sky went yellow with all the sand from the Sahara. We shot there for six days and on all but one of those days no one could get in the water because it was too dangerous. Then we had one day of weak sun so went for it. The water was very cold. Some of us were in wetsuits and some of us without – including me in wig and sideburns.’

The freezing dip was surely worth it for Matthew to bring to life the flawed politician with the audacious plan. He also tried to convey the comical aspect of the man.

‘There’s a lovely element of caper about it,’ he says. ‘It’s the old adage, “If you can make people laugh, you can take them somewhere else.”’