Keeley’s most explosive role ever: She’s the brittle Home Secretary with a new bodyguard who despises everything she stands for, but there are chinks in her armour that he might not be able to resist

From the moment she made her name in Spooks 16 years ago, pretty much everything Keeley Hawes touches has turned to TV gold.

Time-twisting police drama Ashes To Ashes became a cult hit and her two series as Lindsay Denton in corruption thriller Line Of Duty were the highly acclaimed show’s most talked about yet.

She shone as a broken wife in abduction drama The Missing a couple of years ago, and most recently she’s been charming the nation as the irrepressible Louisa in ITV’s sun-drenched Sunday-night drama The Durrells.

But now she’s cast off Louisa’s dowdy brown apron and headed back towards Spooks territory in what promises to be another slice of unmissable TV, a gritty urban thriller called Bodyguard.

Not to be confused with the 1992 Kevin Costner and Whitney Houston film, the six-part BBC1 series is set in and around Westminster’s corridors of power and tells the fictional story of heroic but volatile war veteran David Budd (Game Of Thrones’ Richard Madden), who returns to Britain and a new job protecting Keeley’s ruthlessly ambitious Home Secretary Julia Montague. And, auspiciously, it’s written by Line Of Duty creator Jed Mercurio, 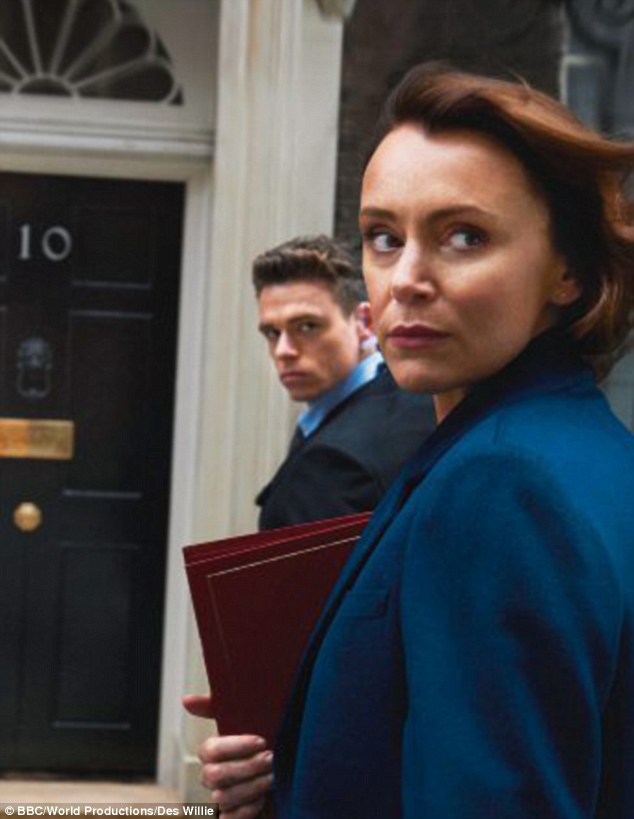 ‘It was Jed casting me in Line Of Duty that gave me a great platform for other roles,’ says Keeley.

‘And this was very good timing because I’d just finished The Durrells, so to do something like Bodyguard which is the complete opposite is brilliant.

‘I was thinking, “Oh my God! Car chases!” If I’m honest I’m never really itching to throw myself into anything as it’s always exciting to see what comes up, but with this series I knew I’d be silly not to grab it.

‘It does feel great going back into this world because it’s quite like the time I spent on Spooks.’

Mercurio’s petrifying opening scene, set on a mainline train, cuts straight to the key issues of national security and the threat of terrorism.

Having been raised in Central London, Keeley, 42, says she’s no stranger to those threats.

‘Doing this drama didn’t make me more vigilant or nervous because I grew up in London to the backdrop of IRA bombings and you just have to get on with it.’

But she admits she was terrified last September when her 18-year-old son Myles (by first husband cartoonist Spencer McCallum; she is also mother to Maggie, 13, and Ralph, 11, from her marriage to former Spooks co-star Matthew Macfadyen) was on the Tube train behind the one on which a bomb was detonated at Parsons Green station.

‘I got a text from him written in capitals, so I knew immediately something was wrong,’ she recalls.

‘They were in a tunnel and the lights were going on and off. The “what if” doesn’t bear thinking about.’

On the Bodyguard’s set in Uxbridge, where we meet, a bleak office block doubles for the Home Office. 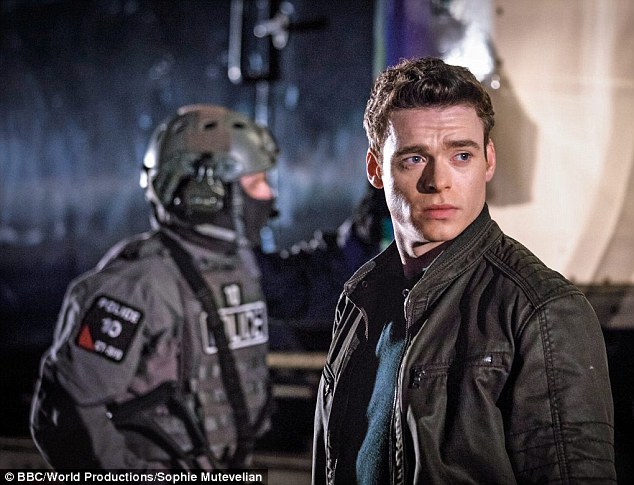 Julia has to adapt to an invasion of privacy when David (played by Richard pictured) is assigned to be her personal bodyguard. He finds himself despising her politics and beliefs

It’s a world away from The Durrells’ gorgeous, relaxed Corfu location where Keeley will begin filming a fourth series next month.

Today the creases down the trousers of her grey suit could slice your finger and her lips are so pinched they’ve virtually disappeared.

‘You can’t be anything but terribly serious when you’re looking after the security of the country,’ she says.

‘So when we meet Julia she’s a very serious woman doing a serious job.

‘She’s been briefed on a terrorist attack which has just happened and she’s heading out to see what’s going on.’

Watching videos of real politicians at work was key to her performance and Keeley worked particularly hard on trying to sound the part, even taking lessons in how to speak like a politician.

‘Goodness, it’s a totally different thing,’ she laughs. ‘My voice was too posh at first because I’d just come from The Durrells. Also, I’m quite apologetic as a person.

‘So I had a few meetings with this wonderful woman who works with politicians. When they talk they don’t have a two-way conversation.

‘They tell you what they want you to hear, and they’re brilliant at it.

‘In the drama I go on The Andrew Marr Show and tell him what I think, and that’s something I’ve never done before. I really enjoyed it!’

Her character has to cope with the invasion of her privacy when David, a Specialist Protection Officer, is assigned as her personal bodyguard.

Scarred – both physically and mentally – from his time in Afghanistan, he is disgusted by her lack of empathy for those who have been sent into danger, and despises her politics and beliefs, which cannot be more different to his own.

While his job means he has to be prepared to take a bullet for Julia, he actually just might become the greatest danger to her. 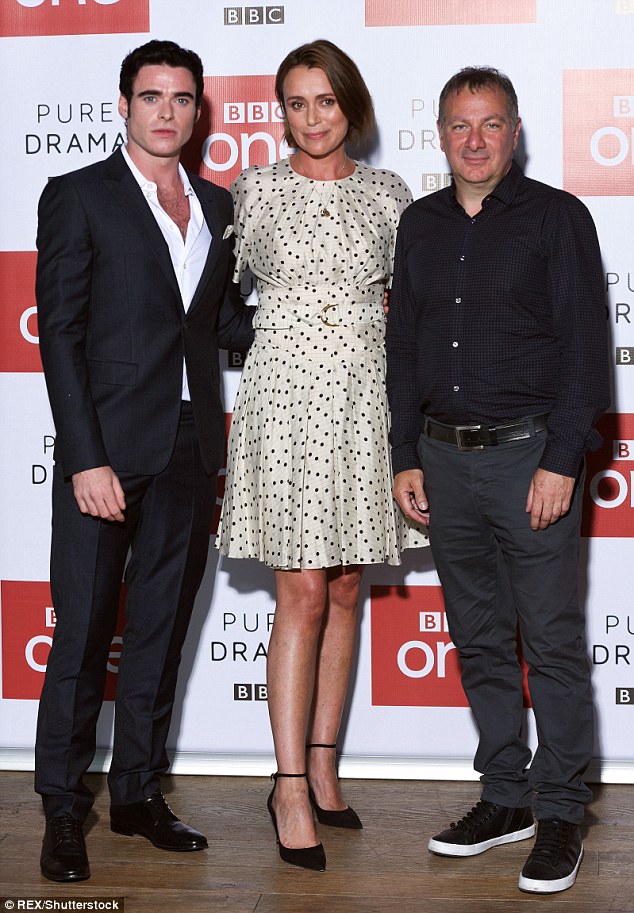 ‘The whole idea of a bodyguard is so odd. Julia has to wait by her door while her whole flat is checked over by him before he allows her to go in.

‘It’s so unnatural,’ says Keeley. ‘It’s difficult for me, as a mother of three children, to imagine that lifestyle.

‘On the other hand you can see how incredibly grateful politicians whose lives are in danger are to have this security.

‘Richard does a lot of standing outside doors and you think, “Does this really go on? Who are these people? Where are they?” You never see them, do you?

‘But I was in a hotel on holiday in the States last autumn and I got out of the lift, walked down the corridor and for the first time in my life I saw one.

‘He was standing outside the room next to mine, with the bulletproof vest, looking very serious.

‘He was guarding a diplomat apparently but I was slightly worried about the security of my own family being in the room next door. I thought, “Hang on a minute – maybe we should be staying on a different floor.”

‘It wasn’t until after this experience in the hotel that I realised how brilliant Richard had been at standing there.’

Richard, whose role sees him reunite with Jed Mercurio after playing the dashing gamekeeper Oliver Mellors in the writer’s 2015 adaptation of Lady Chatterley’s Lover, laughs.

‘I do more than stand. I also do some sitting. And running. There’s some brilliant action stuff actually – including on rooftops.

‘David is a married father-of-two and comes from an ex-military background, but he’s also a troubled man as he’s been through a traumatic time in Afghanistan.

‘So he and Julia are on very different pages about politics, especially when it comes to the Army and military action in the Middle East.

‘I’ve had a few bodyguards myself for Game Of Thrones. I had one in Rio who had been shot about four times and I had a female bodyguard in Mexico City who was 6ft 5in.

‘When a fight broke out at a party, my feet didn’t touch the ground. She had me up, out and into the footwell in the back of the car. 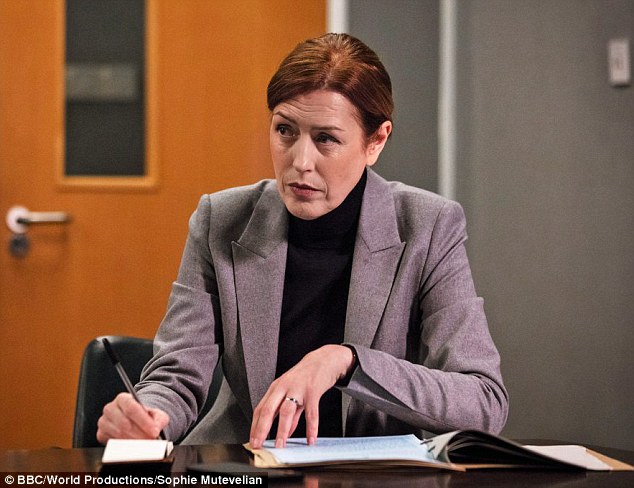 ‘The door wasn’t even closed before we were speeding off! I didn’t know what had happened but it was very exciting.’

It’s not the first time Richard, 32, and Keeley have worked together.

Richard, who joined a youth theatre programme in Paisley at 11 to help tackle his shyness, appeared as young Andy in the film adaptation of Iain Banks’ Complicity when he was just 14. Keeley, then 24, was one of the film’s stars.

‘I love working with Keeley,’ he says. ‘We really get on which is actually quite a shame because I spend most of the time in Bodyguard not getting on with her.

‘But we do have quite a laugh, because in a job like this there aren’t a lot of giggles. It’s very intense while filming so it’s good we can fool around when the cameras are off.’

That said, both Keeley and Richard hint at future intimacy between their characters.

‘First there’s the slight intimacy of occupying someone’s space, like going into her bedroom and poking about with her windows,’ explains Richard. 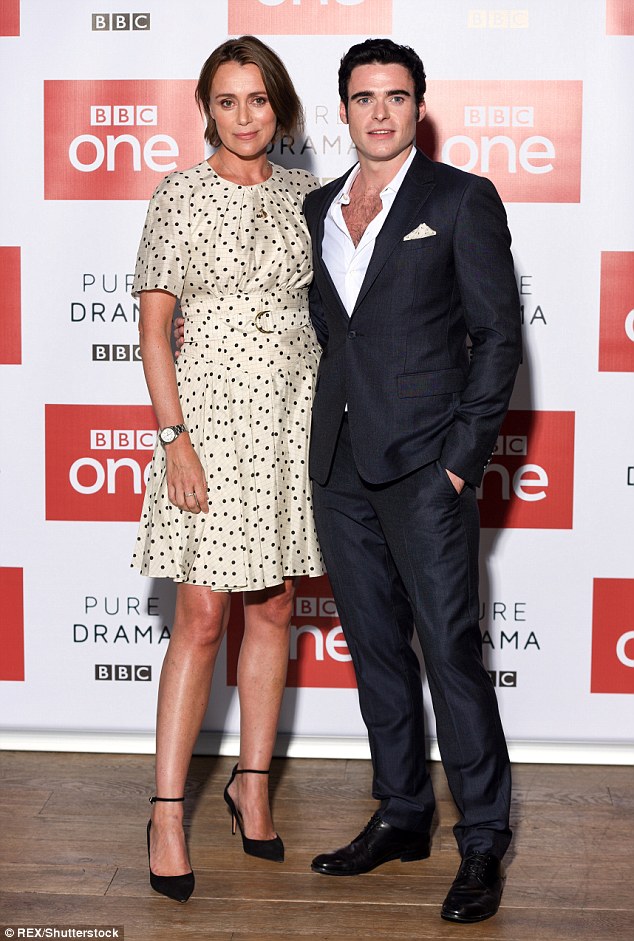 ‘I didn’t expect that, how much their space actually becomes yours because you have to protect it.

‘Then there’s a constant tug between them, and lots of missed connections. They connect with each other, and then ruin it. They’re quite volatile creatures spilling into each other’s worlds.’

Keeley agrees. ‘It does become more personal, and that’s where it gets very interesting because neither of them is who the other one thought they were.

‘Their relationship is incredibly professional and she’s blissfully unaware that he’s not that keen on her politics as they don’t discuss it.

‘But they do get a bit closer because he’s in her house all the time, just ghosting around, and he then starts to see that she’s a human being, it’s not just all about politics.

‘When we first meet her, Julia’s not that likeable. She’s a workaholic who lives on takeaways.

‘But as the story goes on, we do see little chinks in her armour really, because she does have to have this public façade.

‘And it’s really made me think about real politicians too. Whether you agree with them or not, whichever party you support, these people are doing the job because they believe that they’re doing the right thing.’

The events in the series, which also stars Gina McKee as Anne Sampson, the head of the Met’s Counter Terrorism Command, are entirely fictional in terms of who the key political figures are and the political issues.

But the terror is no less real, says Jed Mercurio. ‘I was interested in finding another kind of angle on a thriller – in the world of politics but told more from the police side,’ he explains.

‘The classic bodyguard is a selfless character. But this character David is not an automaton – he’s actually thinking, “Is this life worth saving?”’

Bodyguard starts with a double bill on Sunday 26 August and Monday 27 August on BBC1.