From a London garage transformed into a three-storey property to a home made from cork that’s so light it could float away, these are the ‘experimental’ contenders for Grand Designs House of the Year

From a garage conversion in London to a house made entirely out of cork, Kevin McCloud has revealed five  rather quirky homes that are contenders for Royal Institute of British Architects (RIBA) House of the Year award.

In Grand Designs: House of the Year, which airs tonight on Channel 4, Kevin and his co-presenters, architect Damion Burrows, and design expert Michelle Ogundehin, visit five experimental homes battling it out for a place on the shortlist, all of which push the boundaries in conventional design.

Each week he’ll exclusively reveal which houses the RIBA judges have put through to the shortlist, and in the final programme announce the winner of this prestigious prize.

Tonight’s unique properties include a clever garage conversion in London, as well as a modern day castle and an eco-home likened to a ‘power station’. 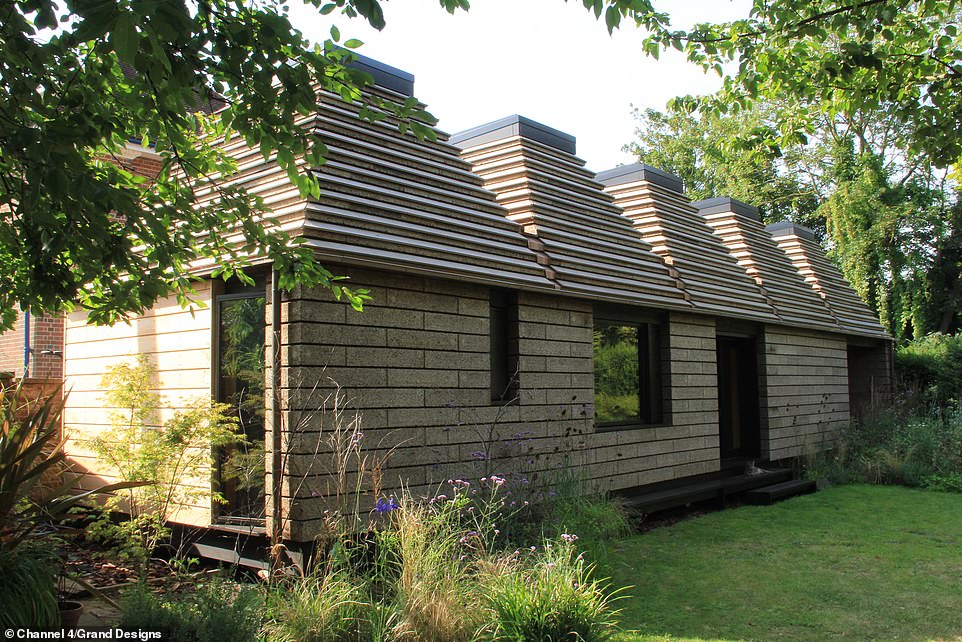 A home in Berkshire made entirely out of cork is one of five homes which features on Grand Designs: House of the Year, which airs tonight at 9pm on Channel 4 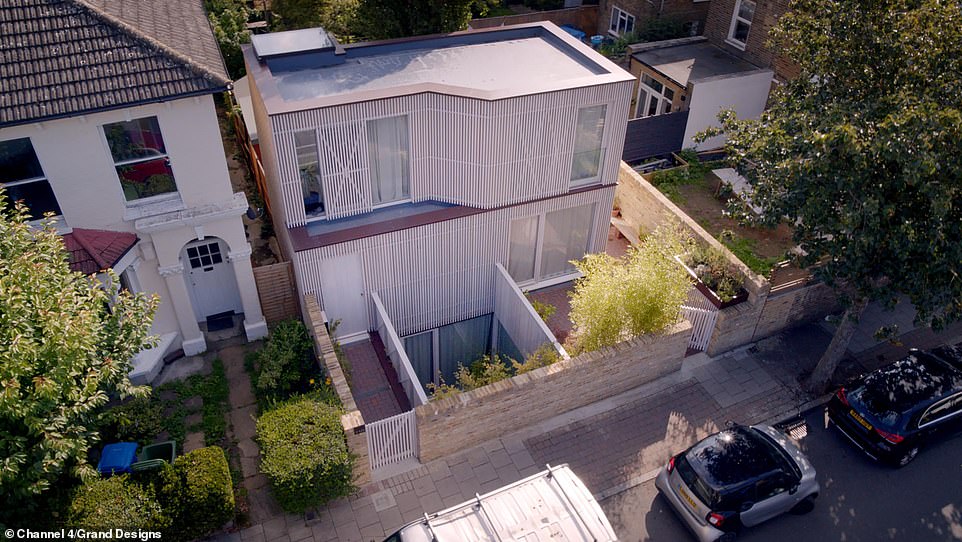 One of the stunning homes featured on the programme is Pocket House, which was built on the plot of a disused garage in South London 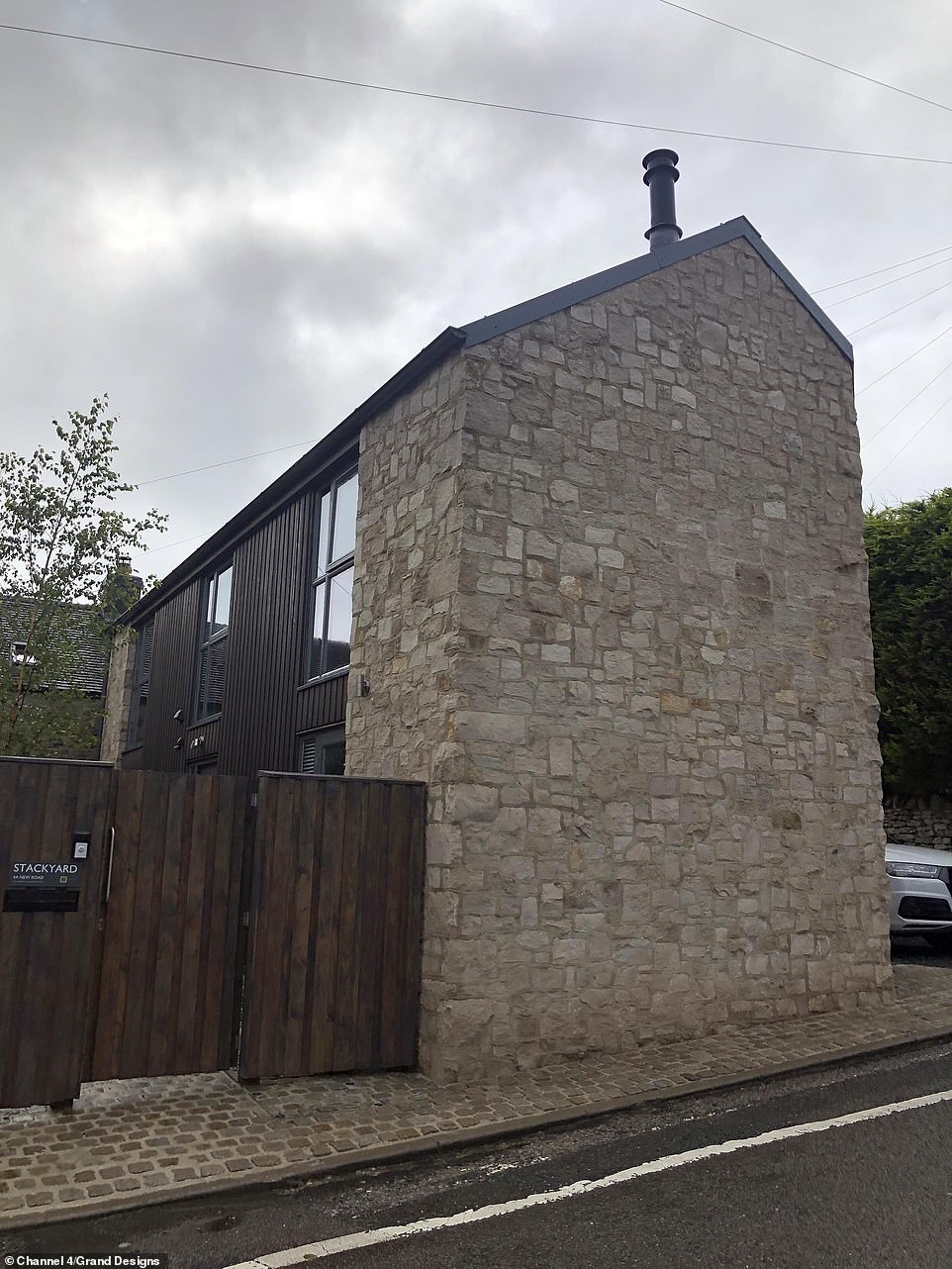 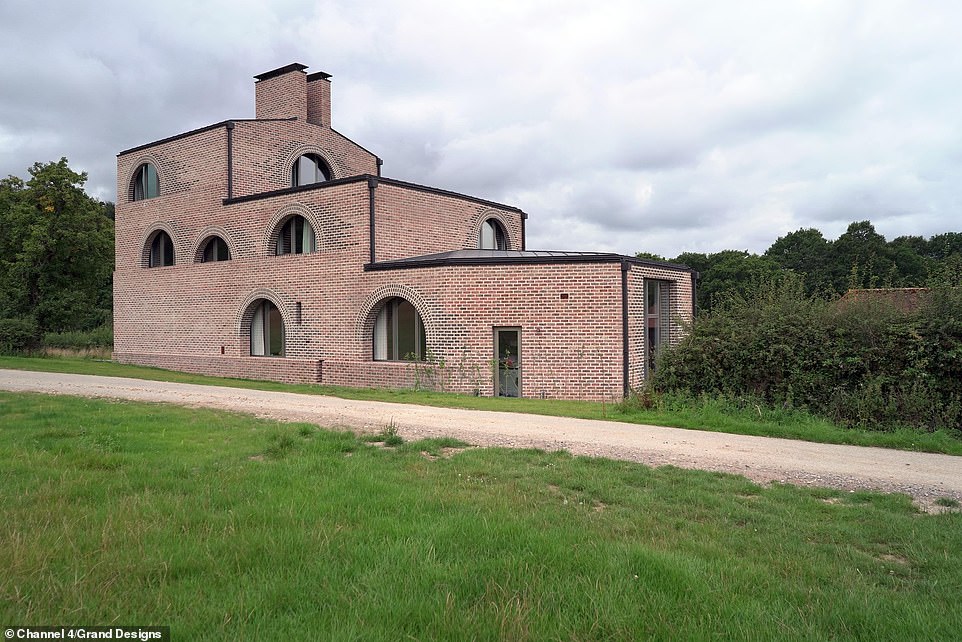 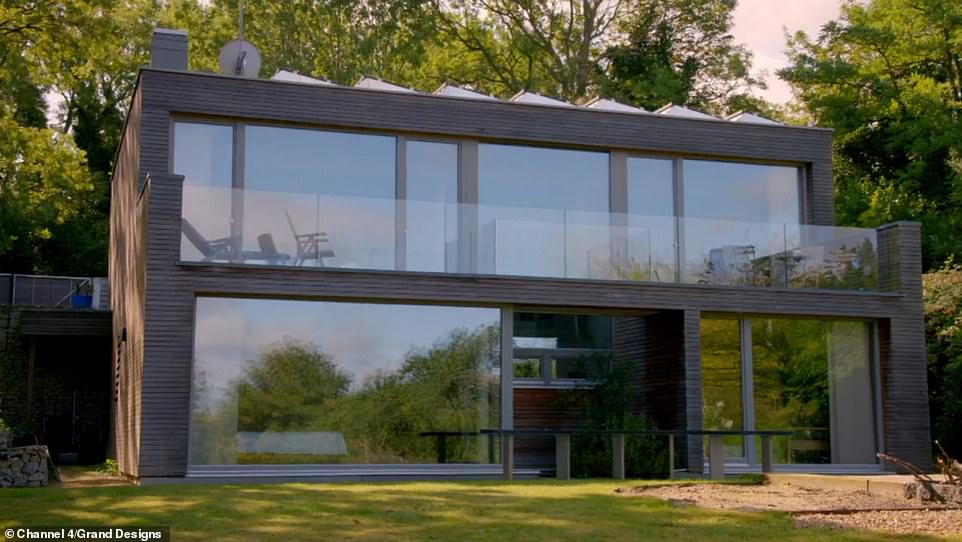 Meanwhile another of the properties in the Chiltern Hills acts as half eco-home and half power station, with 38 solar panels on the roof

House made from cork

The Cork House, in Eaton, Berkshire, is a home made entirely out of cork, with its walls and roof created from the sustainable material.

It is the first of it’s kind in the UK, and features five pyramid roofs, beneath which lies a modest sitting room, kitchen, bedroom and bathroom and sleeping area. Under the fifth roof

Matthew Barnett Howland and Dido Milne said they were inspired to build the home as ‘simply as possible’.

Matthew called it ‘primitive, caveman stuff’ and revealed they hadn’t used any glue or water on the home, which was created by simply stacking 1,200 blocks. 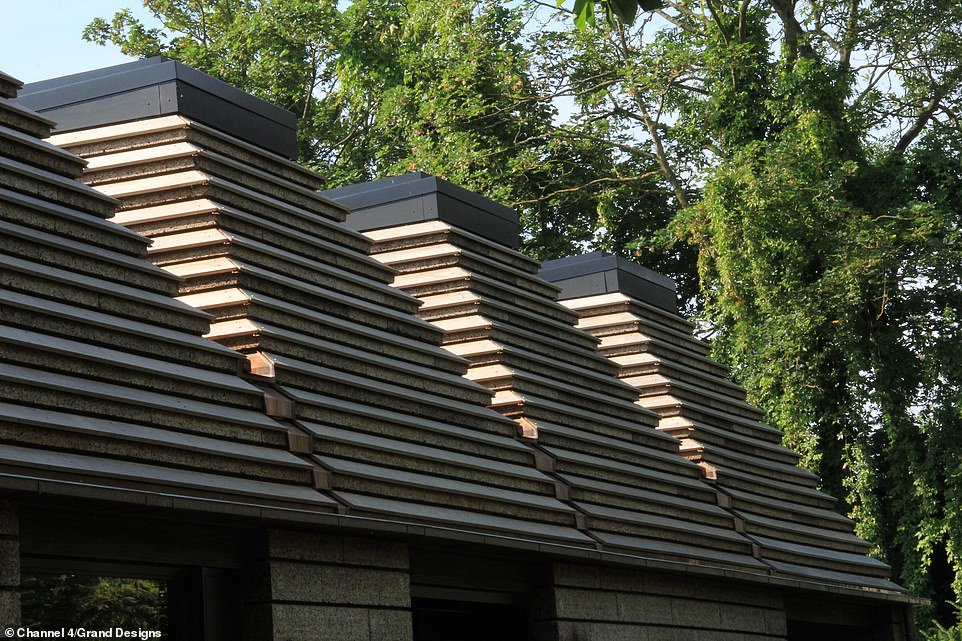 The Cork House, in Berkshire, is made entirely from cork blocks stacked upon one another, with huge sky lights acting like ‘paper weights’ to keep the property from blowing away 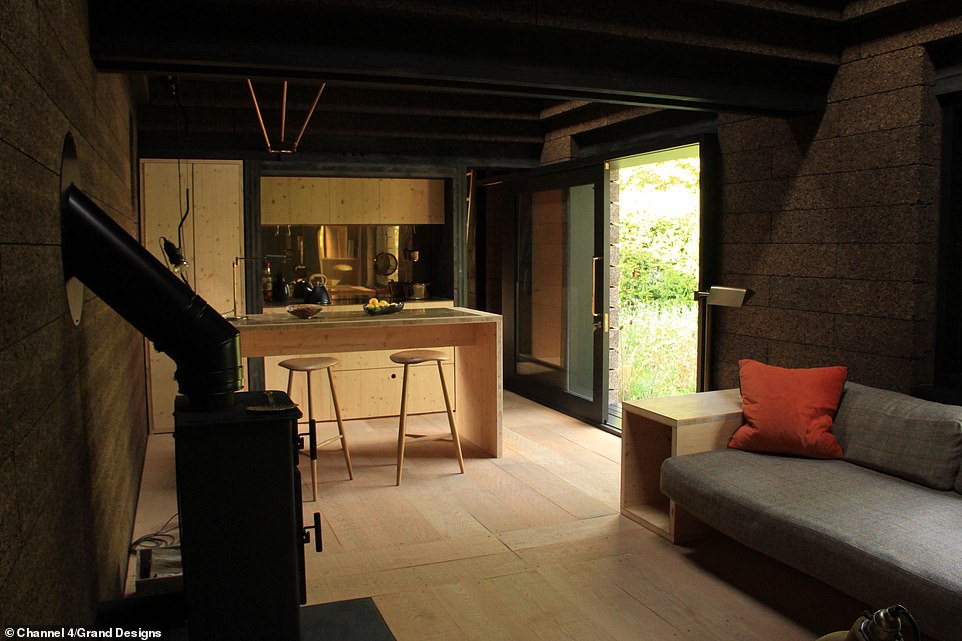 Meanwhile the interiors of the home are simplistic and chic, with large windows allowing light to flood into the space

There’s a lot of air in cork, making it extremely light, so the building has sky-lights which act like paperweights to make sure the whole structure doesn’t blow away.

Dido compared it to ‘plant-based Lego.’

The material of cork is harvested from the bark of living trees, which regenerates, making it highly sustainable.

When the building gets to the end of its working life, it can be taken apart and put back in the soil to biodegrade.

Inside, the natural cork has been left unfinished, although some of the walls have been paneled with wood to give it some insulation.

Dido said: ‘At the moment it’s like a big pin board’, while Kevin called the house ‘beautiful, atmospheric and understated.’

Matt and Dido spent six years building the cork house, and started the proejct with Matt’s father William, who sadly passed away midway through the build.

Matt suggested it was his father’s determination that had seen them finish off the project, saying: ‘He was very good at saying not to give up.’ 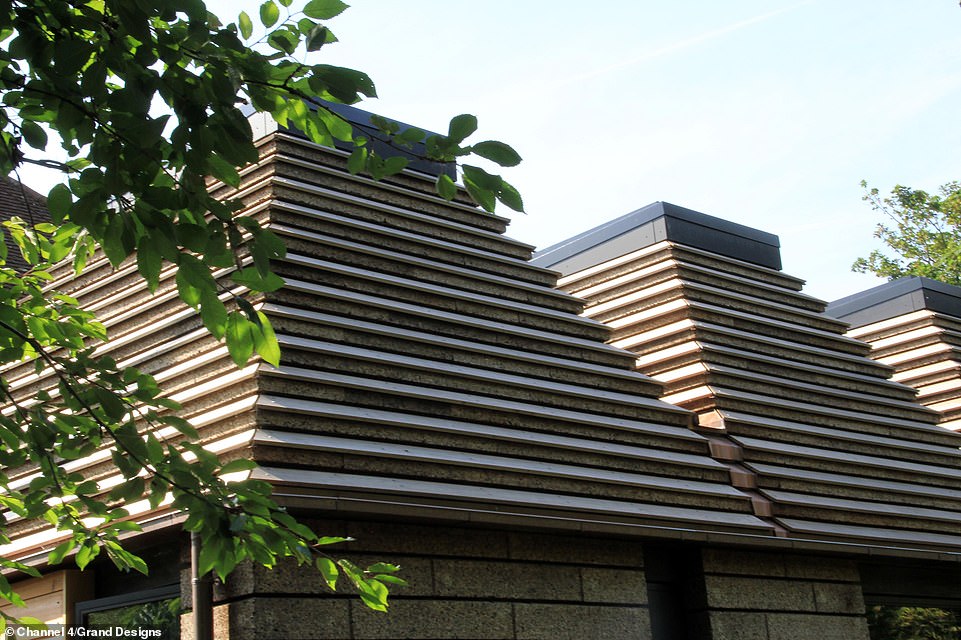 The property features five ‘chimney’ style turrets on top of each seperated room, which allow light into the space

They were faced with opposition from the local council, with Ty revealing when they started building: ‘We received the letter from the local authority, was not so positive.’

Ty said: ‘[It said something like] Don’t come back, nothing on the site is going to be accepted. We took that as a challenge.’

The smallest house on the list, it consists of two crafted boxes balanced on top of each other, with a floorspace of 35 square metres. 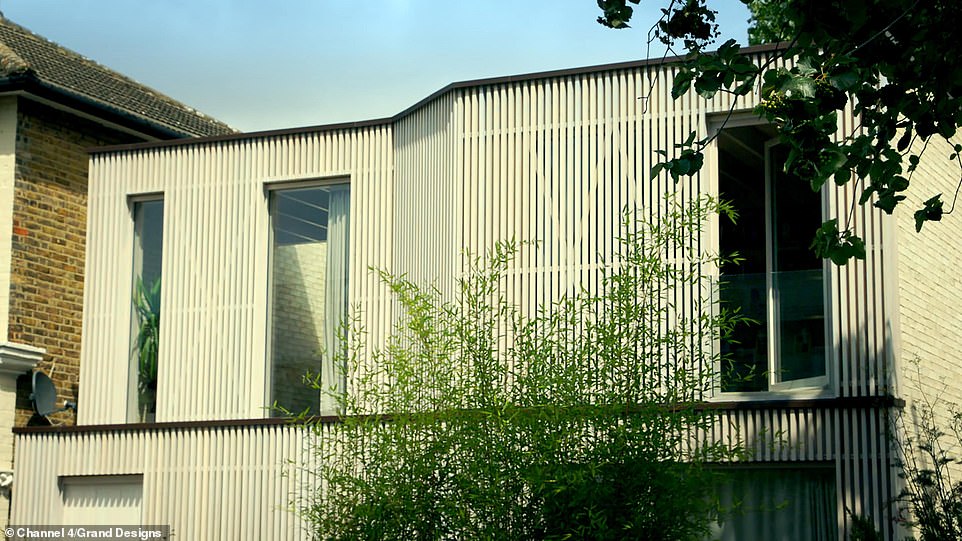 Microhome Pocket House, in South London, was built within the confines of an old garage, and sees almost 50 per cent of it’s living space in the basement floor, which is below the ground

Due to planning restrictions, the micro-home had to be built within the confines of the original garage.

Ty explained: ‘We could only build within footprint of double garage on ground floor. We have to make the first floor even smaller to follow the line of the terraces.’

He added: ‘Some of our friends and family were uncertain over what we had committed ourselves to.’

While the ground floor and the first floor had to be within the original garage, the couple were able to dig out to the edges of the site to create the basement, where their bedrooms are situated, which means 50 per cent of their living space is below the ground. 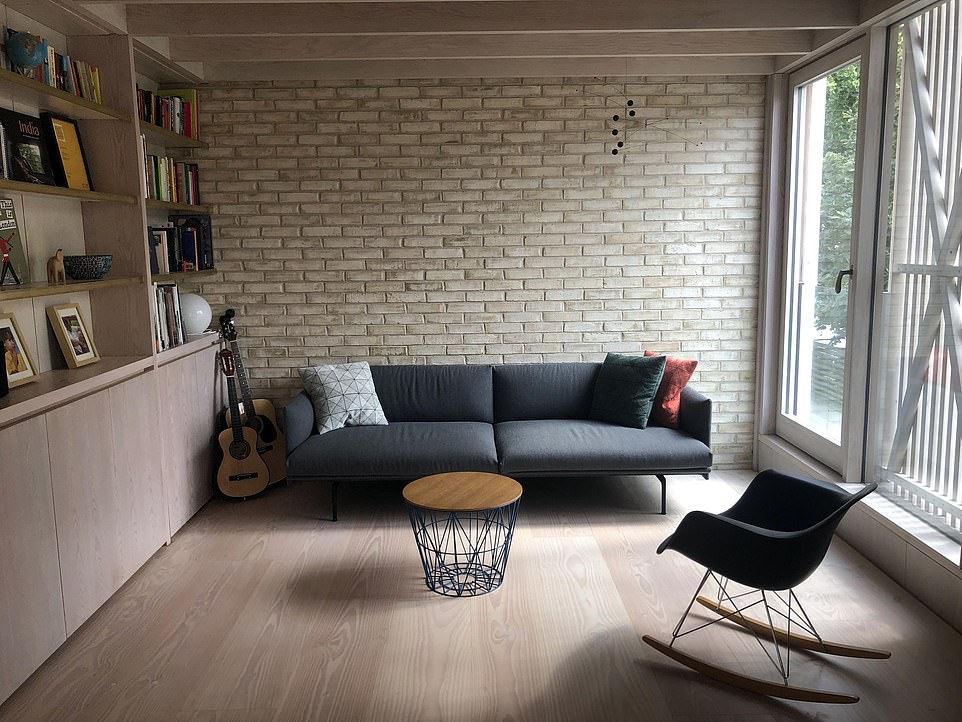 Every element of the home has been designed in order to maximise space and light, with the main living area on the first floor of the two-bedroom house

Ty explained: ‘Without the basement there wouldn’t be a home.’

The couple live in the small two-bedroom family home with their two young daughters.

Ty said: ‘This type of house is something you might see more in places in Tokyo for example, where people are fighting for everyone inch of land.’

And Kevin was astonished by the home, saying: ‘The effect magics up a sense of peace and refuge from the outside world.’

On the ground floor, the kitchen is tranquil and crafted from simple materials, with Danish bricks are all exposed.

Ty said: ‘Every millimeter was critical for making the spaces work.’

The neighbours are fascinated by the project, with one saying: ‘I think it’s beautiful, I really like it. I spent a lot of time staring into the windows, you can’t see in as much as you could. I’m quite nosy.’

Meanwhile Nithurst Farm in Sussex is another of the experimental homes on the long list for the award, with the architect Adam Richards admitting he wanted to create a ‘modern house wrapped in a roman ruin’ 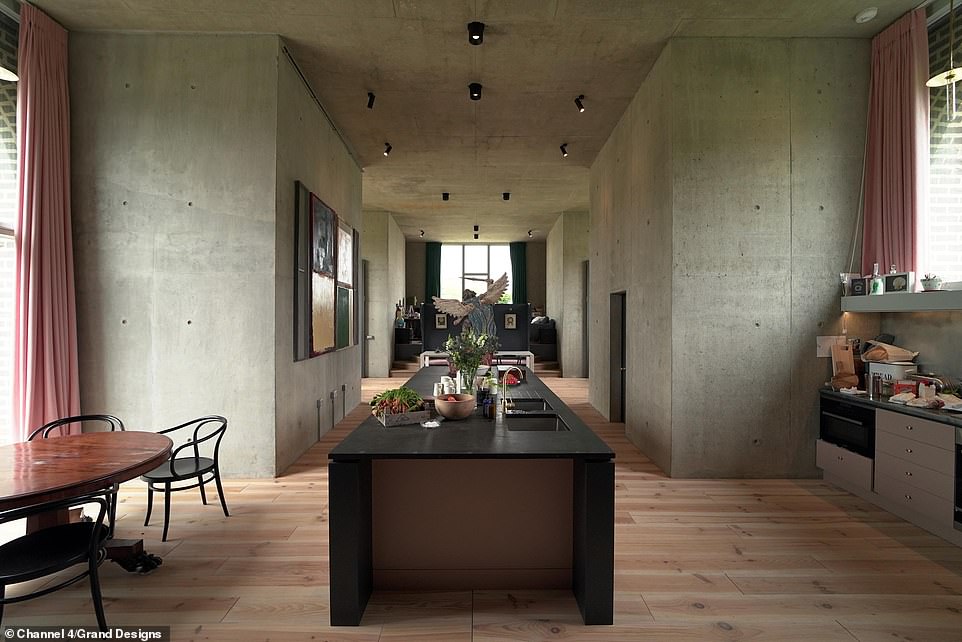 The main room in the house is a huge ‘great hall’ inspired living space, which features smaller practical areas, such as utility room and a study, coming off it

The bold ‘modern day castle’ in Sussex is home to architect Adam Richards and his family, who revealed: ‘I’ve always loved old buildings, so it’s great to be able to adapt them for today.’

The six bedroom property was compared to ‘a modern house wrapped in a roman ruin’ on the programme.

He said: ‘We’ve used very thick mortar joins to play a trick with the brick, they’re normal size brick, but mortar is three times as big to suggests the bricks are tiny.’ 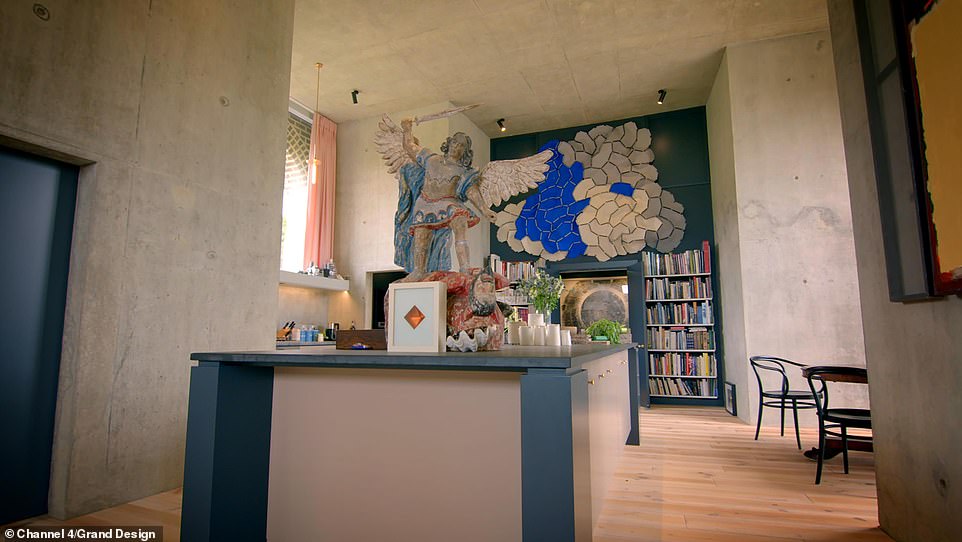 The huge central room in the six bedroom property was compared to a Roman ruin, as well as an enormous concrete church on the programme 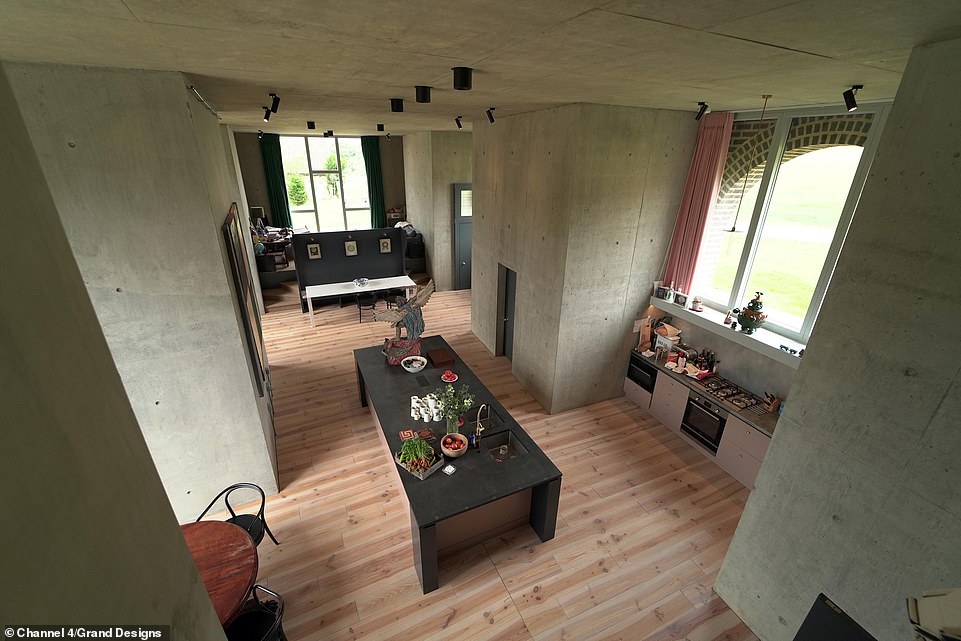 The couple said they were keen to build a home that worked architecturally, as well as acting as a family home (pictured, the main living space)

But his insistence on the authenticity of the build meant the builders couldn’t lay the mortar for six months while they waited for the right weather.

It took two years from start to finish to build the house, with a concrete structure built before the bricks encased it.

Kevin called it a ‘modern concrete church’, with a huge vaulted ceiling in the main room created a great hall.

Jessica said: ‘It was very important to balance the ideas with the practicalities of a family home.’

The home also features two master bedrooms on the top floor as Adam is a snorer, while wife Jessica is a light sleeper. 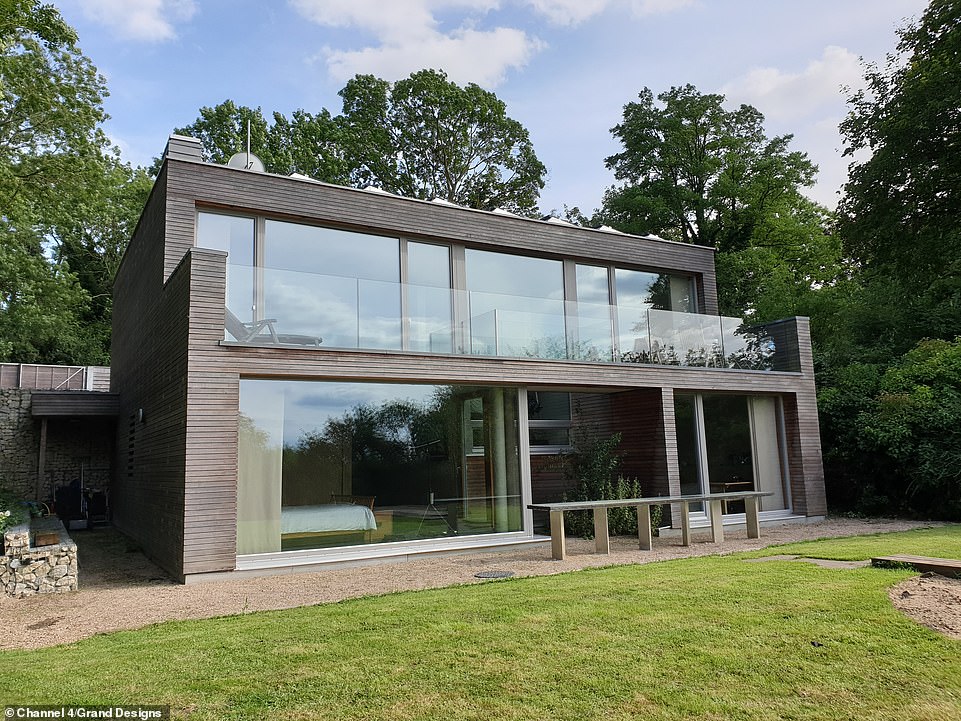 Half home and half power station, Lark Rise, in Chiltern Hills, is also featured on the longlist for the award

Acting as half home and half eco power station, Lark Rise, which is hidden among the trees of Chiltern Hills, was described as a ‘super experimental green home’.

Kevin McCloud called the two bedroom home, which prioritises it’s energy-efficiency above all else, as ‘elegant, unfussy but high tech’.

The two bedroom home was built by Swiss psychiatrist, Hannie Verderker: ‘I grew up in a family where we did not waste. I do not buy more than I want.’

Her dislike of waste led her to built a house that doesn’t waste a thing, so the house holds onto every bit of energy it can, with super thick insulation, and heat saved from the oven to keep the rooms warm. 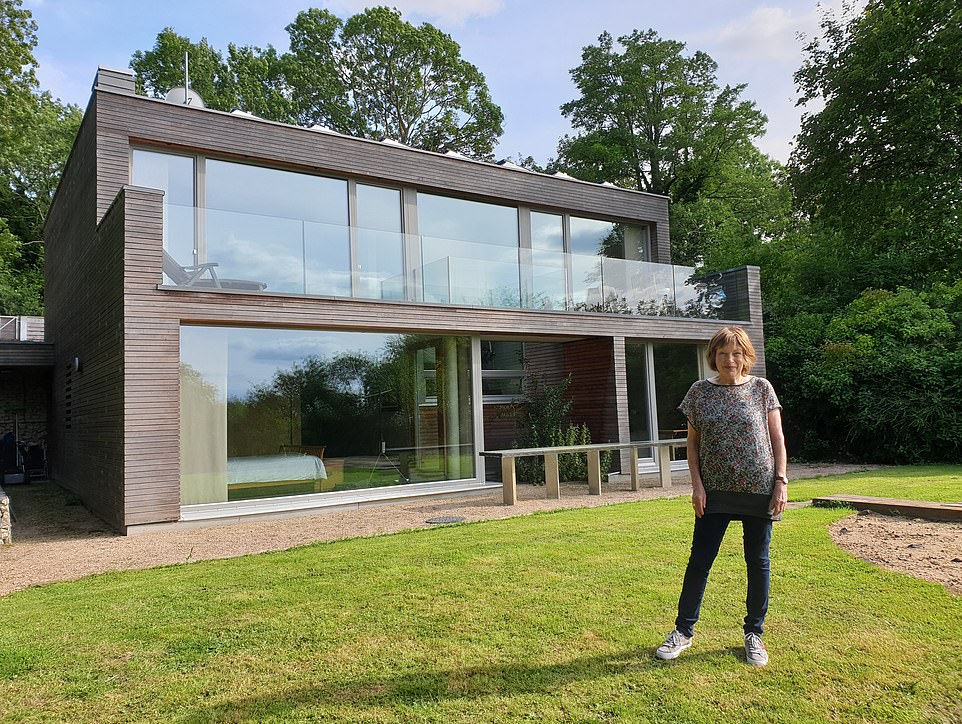 It generates more than it uses and acts as a mini power station, with 38 solar panels on the roof.

Delicate, low-carbon eco wall-supports divide the space. while huge windows allow the light and landscape pouring into the building.

The house took two years to build and to make it as efficient as possible, it was made as insulated as possible. 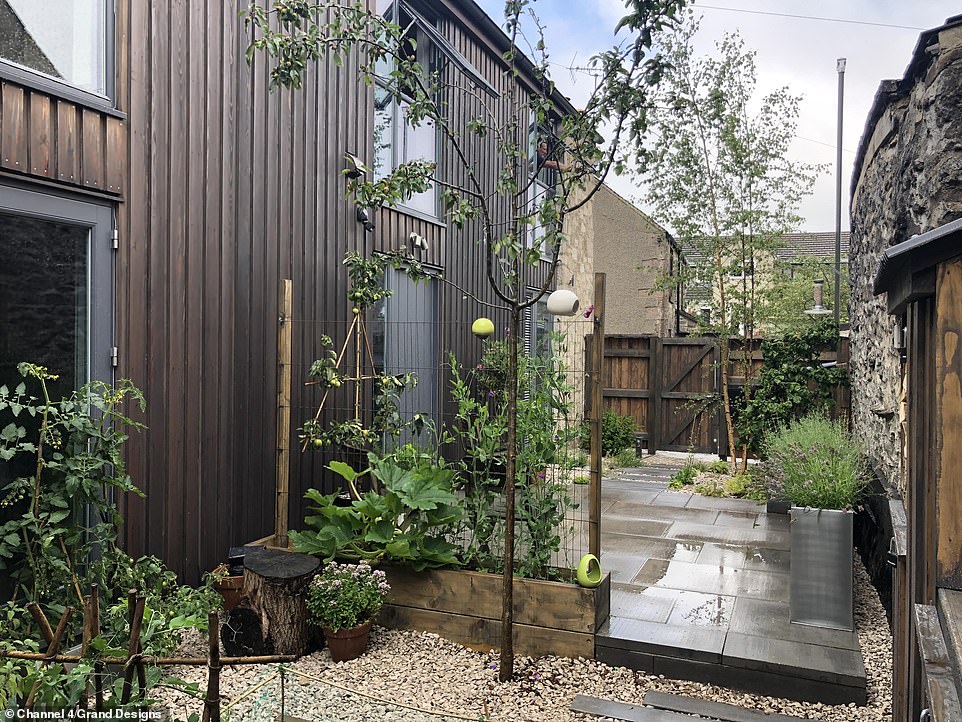 Contemporary cottage Stack Yard, in Derbyshire, was the fifth home featured on the programme, and was praised for it’s innovative design while blending into a small country village

The surprising contemporary cottage in Derbyshire called Stack Yard distorts and warps what you would expect to find in a small country village.

With a plywood inside, corrugated roof, the low key experiment is by architect James Boon, who designed it for him and his wife Carol.

They had been living in a semi-detached three bedroom home in Derby, before deciding they didn’t want to have children, and ditching the traditional home so they weren’t left ‘rattling around’. 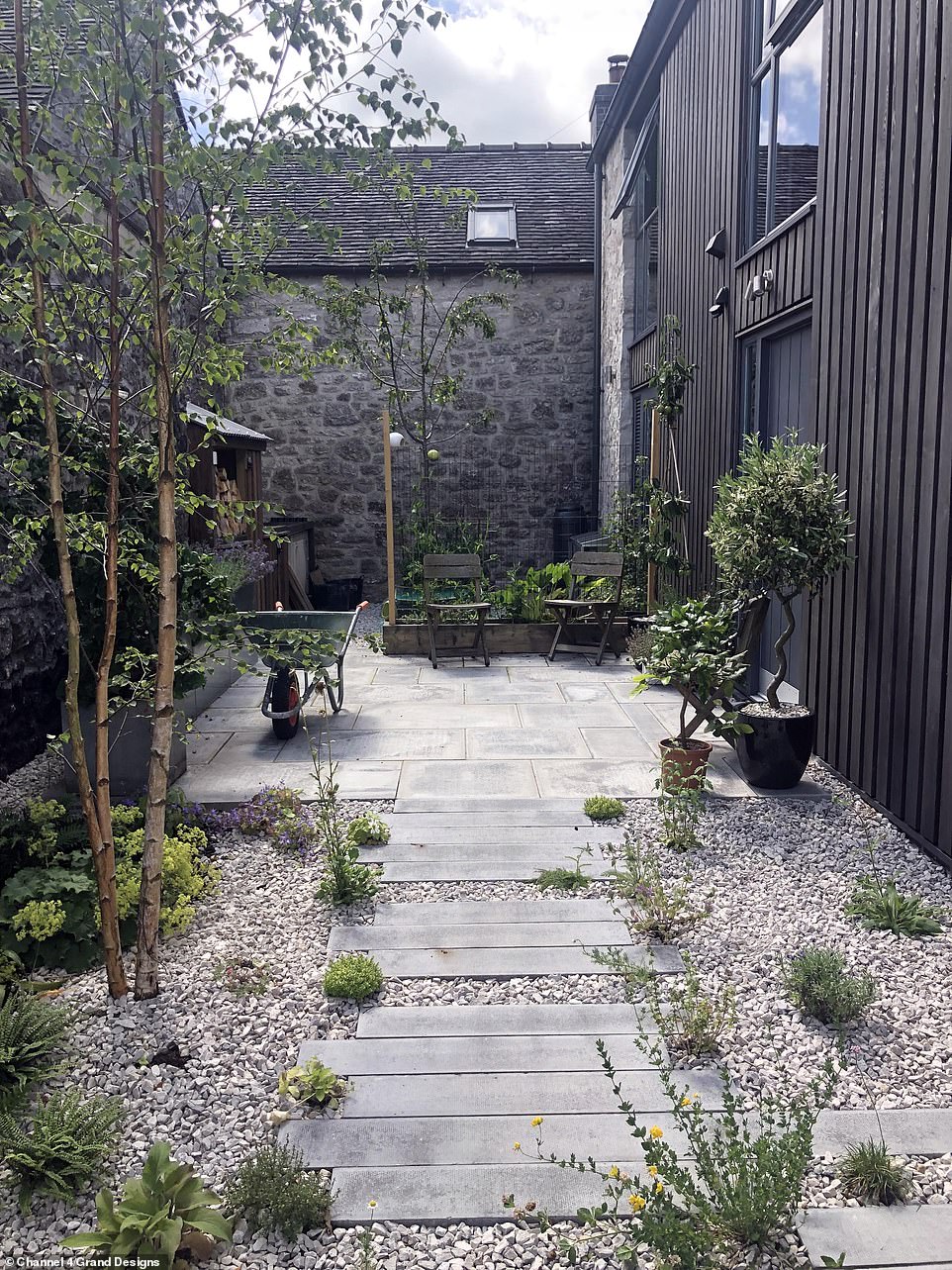 The house is entered by the side through a courtyard.

James decided against building the two bedroom home a rectangular shape, and instead it was shape shifted to the irregular plot size.

Carol said: ‘We had quite a big garden before, so we’ve got one veg bed and one small greenhouse.’

Built the house for under £160,000, which meant finding a low cost but beautiful finishing, so covered the walls with plywood. 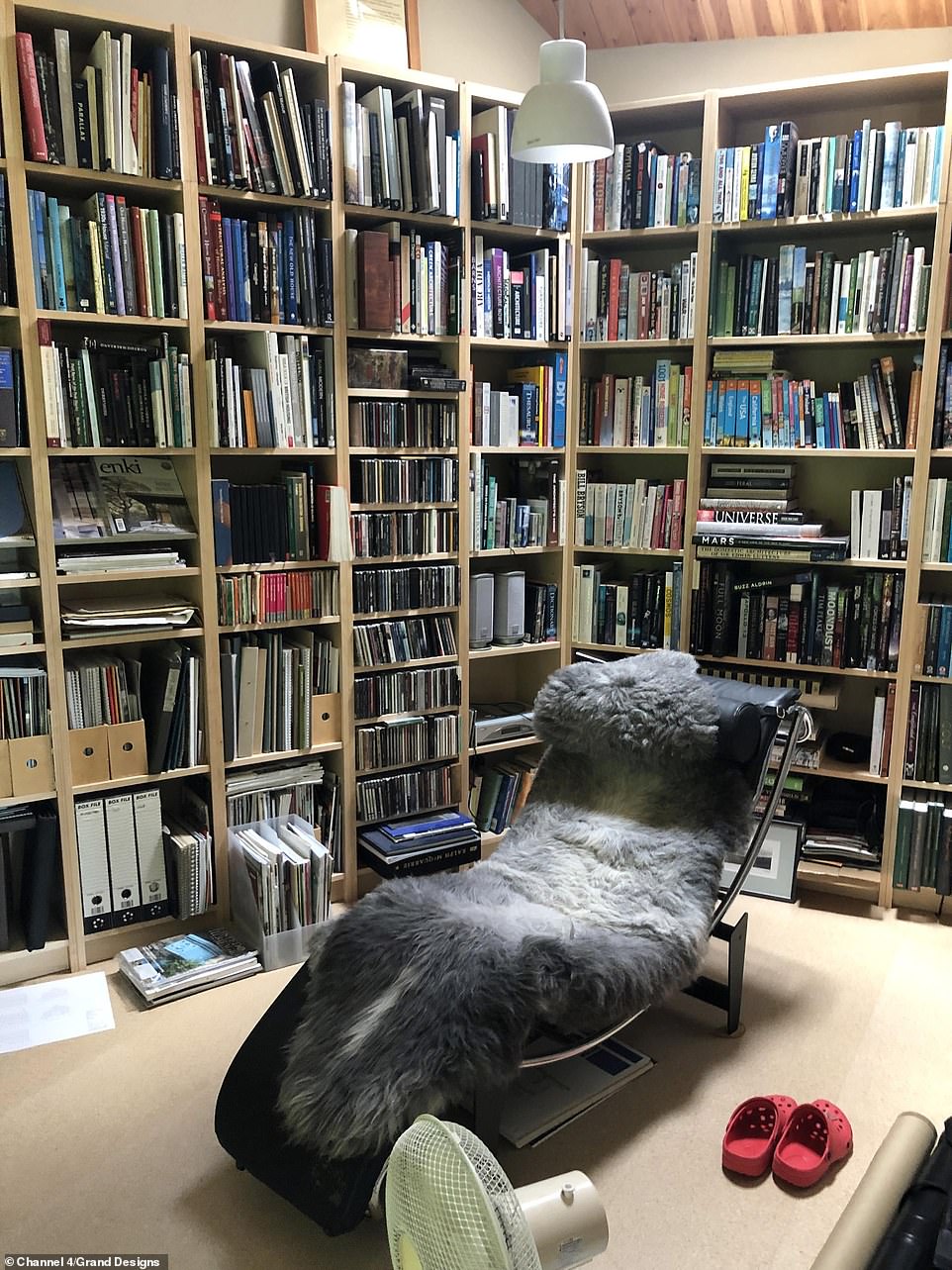 Meanwhile the interiors have been specifically modified and designed to cater for the couple’s lifestyles (pictured, the study that James created used shelving)

The bedrooms are downstairs, while the main living space is above, with a stunning vaulted ceiling.

Meanwhile a custom made dining table built into the stairs to save space, and in the study they created a library with their own shelving.